It was October, the beginning of the Années Folles. They met at the Art Institute Gallery while viewing the Hiroshige print collection. He stared forever at the Great Wave, imagining it as a symbol of humanity and culture crashing into our existential oceans, with nothing to stop it.

Her attention moved from the print to his face.

“I love this,” she said, watching his eyes. He noticed her then, for the first time. She wore a flower in her hair. They talked about art, the beginning of that crazy year, and the new car he had just purchased.

He offered her a ride. “It’s Syncopation Week at the Balaban and Katz,” he told her. They went, and danced till dawn, kissed, and walked to the car. The light of the universe surrounding them flickered, then darkened.
Paris, 1966

They were the only two patrons at the Cafe du Dôme. It was late and summer had heated the streets well into the night. The bustle outside had settled down. He decided it wasn’t really right to eat alone. He asked her gently, “Is this seat taken?”

She looked up from her writing, lips parted, and whispered “No.”

“Are you a surrealist?” she asked, upon learning of his art.

“Yes, in the style of Yves Tanguy. But...this is the end of Surrealism.”

“What comes next?” she asked.

The food arrived, their glasses clinked, and reality shifted.

“Sorry, missy, we’re out o’ produce. Got some canned peaches. Damned drought’s eatin’ up all the farms around Oklahoma County.” He dried his hands on his shopworn apron.


“How much are the peaches?” she asked.

“Eighty cents a can,” was the reply.

She broke down then, crying. The whole county was shut down, choked by dry dust, the farm her father had left her was nothing but barren dirt fields.

“I can’t afford to stay no more,” she sobbed.

He thought a minute.

“Look, missy, my cousin up in Osage County is packin’ up and leavin’ for California Sunday morning. I’ll see if he’ll let you ride along. Here, this can’s on me.”

The yellow Buick pulled up in front of the old farmhouse. The driver came to the front door, removing his hat on the way. She answered his knock and he introduced himself.

“Goin to California, eh?” He had soft eyes and a workman’s hands. He loaded up her two suitcases, while she, with a heavy heart, opened the gates to the pasture. Those few cows left would have to fend for themselves somehow.

“No, she replied, and the tears came once again.
“Don’t worry about it then,” he told her, then wrapped his strong arms around her. “Somehow I have the impression we met somewhere before. Did we?”

She said she wasn’t sure. At the end of the driveway, when the Buick pulled out onto the main road, the storm hit. They stopped, and held hands as the earth and sky turned inside out.

The bus stop at East Pico and Maple was a good place to get a little money, she thought. When you’ve lost everything you ever had or loved or worked for because of this insidious addiction, this is where you ended up, not that nice house in the suburbs, not that condo in the Fashion District. You end up nowhere, that’s where. She could hardly keep her balance, her grip was weakening. Too much. Too much.

She wished she could wash her hair, that’s all. Maybe, just maybe, today would be that day. She dragged her small suitcase up to the bench and sat down, exhausted. A million “ifs” crowded her brain, all at once. “No wonder they think I’m crazy,” she thought.

The bus came to the stop and a young man got off, briefcase in hand, suit and tie. She held up her sign.

“Can you help?” she asked, voice trembling. He looked her way, then walked away. A brief moment later, he turned around, and came to where she sat, a look of recognition on his face. He removed his sunglasses.

She looked at him then, his eyes especially. It was the eyes. She had fleeting glimpses of a long ago party night. The kid’s parents were out of town. The drugs were served up like candy. He didn’t seem interested in anything but her then, while she was there to get high. Her hands shook

“Yeah,” she answered. “Did you go to San Gabriel High School?”

She couldn’t answer, she nodded and looked away, ashamed of what she had become. He sat on the bench with her for awhile, silent. There was so much to say and no way to say it all.

“I want to help you,” he finally told her. “I know a place where you’ll be safe. Will you let me?”

She struggled to find words, just got up off the bench, clutching her suitcase. He gently took it from her. “Let’s go.” He held her hand as they walked. Was she dreaming? she asked herself. Maybe, just maybe there was hope. A second chance. Maybe.

As they rounded the corner onto Maple, the landscape dissolved around them. Or perhaps, she later thought, it was just the end and beginning of new dreams.

The young couple sat among moving boxes and general clutter. The tiny apartment had suddenly become smaller, with the arrival of their firstborn, and they had found a new place. She was introduced to the world a bit early and her parents had to hold on and just pray for a couple of weeks. She grew stronger. When she whimpered, whomever was nearest picked her up and comforted her. She was ravenous all day long, and growing. Daddy held his infant and talked to her. She was only three months old, and he was certain she understood every word.

Mommy came then, hair wet from the shower and took the infant. “I’ll take over now,” she told Daddy. "Time for lunch.”

Daddy had to continue packing, they had to be moved out in three days. Daddy was doing it all himself, he never asked anyone for help unless he absolutely had to. He was funny that way. He’d load up the old pickup and drive the twenty-some miles by himself, unload, then hurry back to his precious angels. Mommy suckled their child and Daddy held her tight, marveling at it all, them, the baby, the new job.

“She’s got that red hair and such blue eyes. I think she’s going to look just like her namesake, your Aunt Karen,” he told Mommy.

“I believe so,” she said.  Funny how kids picked up these family traits. It seemed to be completely random, like the universe was picking and choosing. She wondered aloud how Aunt Karen was doing these days.

“After we get settled in, we’ll go visit her,” Daddy replied. 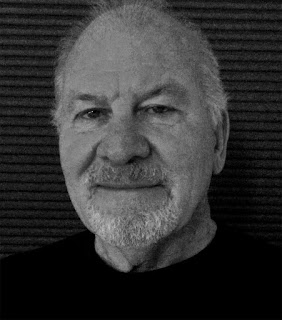 Ed Coonce is an artist, actor, poet, and writer living in Encinitas, California. He studied fine art at Indiana University after serving two tours as a Marine in Vietnam, and transferred to the Coronado School of Fine Art, studying printmaking and painting under Monty Lewis, a Depression Era muralist who participated in the New Deal’s Public Works Art Project. Ed writes short satire and humor, and his current art frequently reflects the topical nature of his stories. Hie is a past board member of the Oceanside Cultural Arts Foundation, where he worked on annual events such as the Oceanside International Film Festival, The Art Festival, And Write On, Oceanside, an annual literary event. He hosts East Hell Writers and Phantom Poets, and is the creative director for Theatre Arts West. He is currently acting, singing, and dancing in a new musical comedy and writing the screenplay for two others.
at January 01, 2018