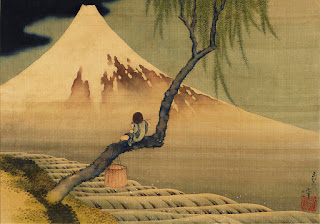 There is a Japanese saying that goes:  “One kind word can warm three winter months.”  As with many Westerners, I am typical in my love of Japanese culture:  Basho and Issa, bonsai and Zen, sushi and sticky rice, wasabi and sake.  Recently, I discovered mirin and now I splash it on everything from salad to fish to saltines.  Japanese food is one of life’s great joys.  When I was a grad student in New York, poor as the church mice (well, rats really) that took refuge at the bizarre and beautiful Cathedral of St. John the Divine, I could afford just one meal a day.  I sustained myself by eating a giant bowl of udon noodle soup, along with a steaming cup of green tea.  I was never hungry.  When kind words are in short supply, a bowl of udon goes a long way.

I smell winter in the air come November 1st.  I suppose I am a feral creature to a certain extent, but I know winter is coming because the air changes—cold has a smell, a snap, almost like peppermint.  It makes my nostrils tingle.  And then, after the trees have been stripped bare, the heavy boots come on, the puffy coat, the hat and scarf—and then, at last, bundled to the hilt, the season of trudging and shoveling and opaque skies begins in earnest.

Philadelphia, where I abide, is a gray place in winter.  In 2003, over 80 straight gray days were counted.  After about twenty of those bleak days, you begin to go a bit pub blind.  We do suffer here from a lack of sun—but there are the cozy houses, festivals of lights, and snow angels.  It’s a gentle sort of suffering—far removed from chaos, deprivation, devastation.  There are fires to be built, and eggnog to be drunk (heavily laced with cognac, of course), and marathon Scrabble games to be played.  In our house, we take our Scrabble very seriously.  It’s blood sport.

So much art has been dedicated to winter—so many Nutcracker Suites.  All those jingle bells.  I am infatuated with that scene, from Les enfants terrible, where Cocteau writes:  “Gleaming with soft effulgence of a luminous dial, the snow’s incandescence, self-engendered, reached inward to probe the very soul of luxury and draw it forth through stone till it was visible, till it was that fabric magically upholstering the Cite, shrinking it and transforming into a phantom drawing room.”  Here Conteau allows us a moment to be wonder-struck children once more.  He also reminds us that snow season can be a cruel master.  The poetry above is followed in the book by the immortal snowball fight, when poor Dargelos is knocked unconscious.

I am also infatuated with another scene, also lyrical but in a very different spirit.  It’s a print of a boy seated in the crook of a Japanese willow, with a water bucket at his side.  For reasons that may be personal—or entirely and intentionally universal—that scene is inextricably linked to winter for me.  We never see the boy’s face (his back is turned to the viewer), although he is obviously transfixed, suspended in the air, meditating on a mountain in the distance.  It’s Hokusai’s Boy Viewing Mt. Fuji.  The boy seems to be at perfect rest, or is he?  The path before him is rutted, the only verdant color is the green of the willow and parts of sky.   It’s a subdued green, gray in tone, as is the entire composition.  Above Mt. Fuji swirls the blackest of clouds.  Contrasts of this sort are so typical of Hokusai, whose fantastically simple lines seem to have no beginning or end, where everything meets up with everything else.  I find myself returning again and again to that print—a lonely image that never makes me lonely.  Only happy to be alive—yes, even in winter.

It is my great hope that you, dear readers, will find something to sustain you through the winter—even if, as they say in Japan, it may be simply a kind word.