Borges: Is History Repeating Itself?

BUENOS AIRES “A dictatorship is good for writers. Censorship challenges them to make their points with ever greater care and subtlety.”

When Jorge Luis Borges voiced this aphorism to student questioners at New York University a few years ago, the students, aware of his misfortunes under Juan and Eva Perón, thought it was black humor. They didn't realize it was precisely the acceptance of this challenge that had enabled him to survive and had honed his ironical wit.

Borges's words return to me as I walk from San Martin Square to the National Library. The harbingers of Perón's return are ever present. No wall stands without Perlin posted seriatim. Posters of Perón (as civilian and as lieutenant general), posters of Perón and Isabel (“the formula of the people”), ditto with Isabelita's face scratched away, and posters of Eva Perón rediviva (“Evita lives”). Everyone remembers how Perón, before his flight in 1955, removed Borges from his directorship of the National Library and designated him a poultry inspector. Now we are apparently to see a confrontation between the 77‐year‐old demagogue and his 73‐year‐old scourge.


The National Library at 11 A. M. is chilly inside. Shortly Borges appears on the scene, leaning on an aide's arm. He looks older now, and his eyes no longer focus on you. Yet the keen wit, the graciousness and the quiet dignity have not changed. Borges explains in a whisper the holdings in the main reading hall. “We must not disturb the readers.” He is proud of the 800,000 volumes. “Good for a South American library, although not to compare with the two or three millions in small American universities.” Borges refuses my gambit of Spanish, clinging to his precise English. A heritage, he explains, from his father, whose yellowing English dictionary he proudly exhibits on his bare desk. 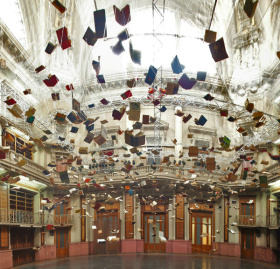 
I voice my approval of the Spanish custom of appointing the nation's most distinguished literary figure to head its national library, recalling the case of Menéndez y Pelayo.

It is appropriate to talk literature for a while before getting to the topic on both our minds. I propose that his best story is still “Averroese's Quest,” that ironic version of the great Arabic scholar at work on his translation of the “Poetics” of Aristotle. In Borges's recreation Averroese (Ibn Rushd) is familiar with all the literary terms in Aristotle except “comedy” and “tragedy.” I mention that I tell this story often to classes. Borges agrees that it may be his own favorite.

At length we arrive at the topic of Perón's return to power.

“Is history going to repeat itself, Borges?”

“History may well repeat itself.” He is referring to his own dilemma as well as that of his country. He speaks at length and with frankness about the character of Perón and of the cynicism of the Peronists. “If you call Perón a rascal, they do not mind. They mind only if you call him a fool.”

He talks of the deteriorating intellectual climate in Argentina, already anticipating as inevitable a new Perónism. Of the new political appointments at the University, a scandalous dilution of prestige.

“The only liberal element left is the P.E.N. Club.”

He then explains how the “great funk” already involves him as an individual and a writer. “Editors who have invited me to do an article for their journal now write back to suggest that I hold off. Friends who have asked me to give a lecture now suggest that it is not the proper time.” As elections approach, a universal mutism takes over. In a matter-of‐fact voice he concludes, “I am the only one who speaks out.”

Naturally Watergate comes up, with the inevitable comparison of Nixon's and Perón's techniques of centralizing power. Borges feels that the United States cannot succumb to a corrupt autarchy. “You are protected by your own Protestant background. Here, the ingrained Catholic love of form and ritual attracts people to the hierarchical.”

Friends try to rationalize that Borges could not again fall victim to Perón. Has not Borges been twice a nominee for the Nobel Prize? Has not Perón now stated that Argentina needs all talented men of whatever party? Borges does not share this optimism. Would Borges accept something like the Norton Lectureship he held at Harvard, a foundation grant—or a post as writer‐in‐residence? Just in case the cycle of history did start to revolve.

“I should not only accept it, but be grateful for it.” Yet, he qualifies, he could not at this moment leave his 97‐year‐old mother, who has served so long as his reader and secretary and who is ill. “Then, too, an offer to come to the States would have to provide for an assistant because of my sight problem.”

After a pause, he adds, as if debating it within himself, “If my mother passed away, I think I might leave this city, which has so many memories for me.”

Eventually he walks me out the door to the broad stone stair, waiting courteously, cane in hand, until I reach the first floor. His farewell, or perhaps it was a goodbye, leaves me sad. I am told that a recent poem in the Nación touches upon his own death.

Later that day the distinguished writer Susan Bombal asks me to come to tea with Borges at her home. I am very tempted, but decline, reluctant to intrude further into his labyrinth. What can be done for Argentina's greatest writer, past or present? One solution might be for the Swedish Academy, instead of making an accessit of Borges once again, to award him the deserved laurel which has harassed and embarrassed despots through the choice of laureates: Hitler through Jensen, Stalin through Sillanpää, Bulganin and Khrushchev through Pasternak, Franco through Juan Ramón Jiménez, Brezhnev through Solzhenitsyn.

It might be the very mechanism to save Borges from Perón.

Credits:  This article originally appeared in 1973 in The New York Times.