By
Kathryn A. Kopple
What are we to make of a novelist who rejects his chosen art form, his inherited traditions, and – with even greater contempt – rejects those who like to read novels?   What are we to make of this novelist, the one who claims to hate the very idea of the novel?  Do we banish him?  Or make him our hero?  More precisely, our anti-hero.  Because readers do need reminding that novel writing is a literary art.  Is it by chance that Emma Bovary is an ardent but untutored fan of Sir Walter Scott?  Or a coincidence that Hemingway, in The Sun Also Rises, savages Robert Cohn, who happens to be a popular novelist?  And need we be reminded of the pernicious effect that books of chivalry had on the errant Don Quixote?  Ironically, Cervantes thought he'd make some money off his comedy.  Little did he know that he started a rebellion.
Which brings us around to Jonathon Coe's Like a Fiery Elephant (Continuum, 2005), one of the most the most courageous biographies written about Johnson.  Coe is not one of our anti-novelists but his subject, B.S. Johnson, was.  And it was Johnson's struggle against the novel that makes Jonathon Coe's biography worth reading.  Or rather, I should say two books worth reading, for Coe's biography is a double book:  a highly self-conscious experiment in which the life of the novelist is reflected in the work of the biographer, who is also a novelist, and who frets about what it means to write a biography while giving us the facts, many of them damn depressing, about the larger than life, though largely unknown, B.S. Johnson.  Here is Coe, in the introduction to Like a Fiery Elephant, outlining the work ahead of him (and us):
My strategy will be this.  Many people picking up this book will not (regrettably) have read anything by B.S. Johnson before.  Revered though he is by a few, he is unknown nowadays to most British readers under forty.  So I shall begin by explaining, in a little more detail, what it was that he wrote and that I think he achieved.  After that, pace Milan Kundera, I shall have to bring myself to knock down the walls of his house and we shall take a wander through the rubble, perhaps shaking our heads in awe and wonderment at the melancholy grandeur of the ruins we find there… And last of all, a short coda.  In which I shall attempt to put forward my own highly personal – and, yes, speculative – thoughts about the forces that may have been driving him in his last days and hours:  a 'transcursion into his mind' – to use Johnson's language – or even (the phrase is from his fifth novel, House Mother Normal) 'a diagram of certain aspects of the inside of his skull', as he gets ready to compose his final message to the world; to write his very last word.
What was Coe thinking?  This is not what we expect when we pick up the story of a life that we hope will be a lot more exciting than our own.  But Coe has not written that kind of biography, any more than B.S. Johnson wrote that kind of novel.  Not that we will have to work as hard as one might imagine, for Coe is a self-confessed traditionalist; he will not risk alienating his readers.  Instead, he does everything in his considerable powers to charm, entertain, and persuade in the hopes that readers will stick with his long and unwieldy tract to "the very last word."  Because Jonathon Coe believes that novels really do matter, that our lives would be irrevocably diminished without them.  And that may very well be something that he learned from the torturous search for art in the novel making of B.S. Johnson.
Bryan Stanley William Johnson was born in Hammersmith, England to a working-class family in 1933.  His early life was defined by the trauma of wartime evacuation, a prolonged separation from his family, and his struggles to gain entrance to the university.  During his teens, he worked as an accountant in various low-level positions, an experience that provided him with the experience and skills for his sixth novel, Christie Malry's Own Double Entry:  a send-up of capitalism done in high modernist style.  Johnson found inspiration for the book in the life of Luca Bartolomeo Pacioli, a Tuscan monk and friend of Leonardo Di Vinci, who in a paper penned in 1494 laid down the science of double entry bookkeeping.  Paying homage to this exceptional accountant, Christie Malry's Own Double Entry proceeds according to the kind of logical madness that one would expect from an author who defended against great odds his belief that it is not the author's job to tell a story.  Instead of a story, Johnson offers us the shifting viewpoint that we associate with James Joyce; instead of plot, he gives us experiments with time, death and decay - showing how these forces affect the structure of the novel; in place of conflict, Johnson focuses on personal trauma, memory, and loss; and where we expect resolution, Johnson offers no consolation for the fact that life is not a story and it does not always end happily. 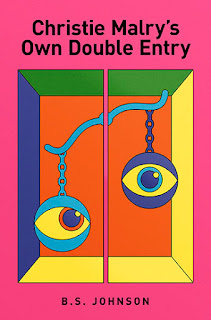 Nor did Johnson's.  Depressed, manic, alcoholic, and finally suicidal, Johnson was a man beset by many demons.  He made friends but he made even more enemies, and there were times in his life when he seemed determined to destroy his own career out of sheer spitefulness.  Coe makes excellent drama of the numerous letters Johnson wrote lambasting his agents and publishers for failing to understand the extent of his achievement.  He approached his work with grim seriousness, all the more so because his books cost so much to produce.  He liked to cut up his novels, put them in boxes, slice holes through them, and, when he tired of that, abandon them entirely.  When publishers balked at this, he flew into a rage.   A letter to Thomas Wallace of Holt, Rinehart and Winston begins "You ignorant unliterary Americans make me puke," and it goes on to state that "Your letter makes it clear to me why it is that America has never produced a great writer:  and you won't recognize him even when he comes."  Indeed!  With this sort of behavior, it is a wonder that he was published at all.
He was the recipient of some notable prizes, and earned the respect of prominent writers, among them Samuel Beckett.  Cut-ups may not appeal to everyone but Johnson could write beautifully. If he lacked the sedate elegance of most modernists, it wasn't because he was full of himself or too delusional to know better.  Coe thinks so, but then he admits he doesn't understand his subject completely.  Johnson didn't want to be loved. He wanted respect.  His tribute to the late Sylvia Plath is most appropriate in this sense:  "Many misleading and unnecessary claims have been made for her work… which have made true assessment impossible for years yet; but the important thing is that she should be read."
at September 20, 2017