And the Helicopter Said: "We Have You Surrounded." 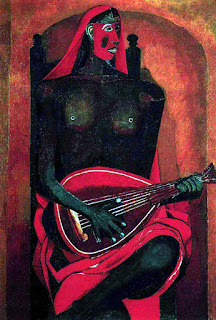 And, the helicopter said, “We have you surrounded.”
And, mi gente (my people) on the bus have blank faces;
afraid to give a message.
However, amid them is a one
with ear buds,  a smile, long hair, and her head shaking to and fro
kind of like my dances.
She is not blank.
She is colored.

The dark and wise and crazy shaman woman
looked at me at the bus stop and said,
“Ya viene el autobus.” (Here comes the bus.)

The insurance man said nothing of Covered California,
but he said it would all be alright.
He was thin, Chicano, and worked in an office with bullet proof plastic.

The Mesopotamian priest outside the liquor store had a smoke with a friend.
He is rich and white and colored.
He said, “We are one.”

My brother said, “Eminem has a new song for you.”

The bird in the tree said, “It is time.”

The market paper said, “Chorizo is on sale.”

My mother said, “Thank you.”

I took to dancing on the train.
But they would not let me be.
They said, “We are watching you.”

The music said, “We are urban.”

The neighbor lady who sells flowers said, “You are invited to another party.”

They say that Spiderman doesn’t make house calls.
But he came to my house and sang me songs.

In the morning the fake church bells ring
and the ocean blocked by the Navy base sends its salty scent.

Children’s laughter at the local school is drowned out by the school’s nerve racking rings.
I have PTSD from teaching there.

I say, “Mix-Master go faster.”
Shell Town is the place to be.
It’s up the street from Coney Island
and 16 blocks away from Chicano Park.
I have a poem mural there.
We should edit.

And, the helicopter said,
“We have you surrounded.”
Good afternoon, everyone.
at September 25, 2017