TLY: We are happy to welcome Goirick Brahmachari. Goirick is a prolific poet and one of the founders of The Sunflower Collective.

Let’s begin by asking the following: Allen Ginsberg once wrote, “Follow your inner moonlight; don’t hide the madness.” When I read this advice, I ask myself if Ginsberg isn’t what you might call a “poet of the night.” Dark. What are your thoughts?

Goirick: Madness is a virtue - as far as poetry and other forms of art are concerned. However, it is evil when it comes to interpersonal skills and relationships. I have understood it the hard way. Yet, never could I learn the etiquette to ensure a good rapport among peers. Artists like Syd Barrett, Freddie Mercury, Dylan, Ginsberg and Ritwik Ghatak have inspired me immensely since I was a child until this day to live and write whatever I write and however I have been living. I think none of them were just “poets of the night.” They lived their lives.

TLY: I have read that your grandparents migrated from East Bengal to the Barak Valley in the northeast of India. Could you give our readers a sense of the history behind these migrations? Why did people leave East Bengal?

Goirick: Yes, my grandparents from either side were from East Bengal (or East Pakistan, as the region was known, just after the partition of India). The partition occurred just before the British left India and they divided us into two separate sovereign nations based on religious divisions, India and Pakistan. There were mass scale riots, and religious killings on either side that forced migration. Pakistan had two geographical frontiers, East and West. While Hindus from East and West Pakistan migrated to India to save their lives, Muslims from India went to Pakistan in order to save their lives. A lot of literature, academic or otherwise is available online for those who want to read about it more.

After a linguistic revolution in the eastern part of Pakistan and a bloody war between the two partitioned nations, India and Pakistan, in 1971, the country of Bangladesh was carved out of East Pakistan, one of the first nations to be born out of linguistic identity.

TLY: Your first collection, For the Love of Pork, came out in 2016. How are readers to take the title?

Goirick: The right wing Hindu Nationalist BJP government had come to power in 2014. Hindus, especially, North Indians, worship cow and see it as their god. There were killings in India in the name of beef. Muslims who were suspected of eating beef were lynched by mobs. There was a lot of talk from the government and their supporters about vegetarianism. In addition, in the Indian English poetry scene, where upper class, elite, communists have always dominated, many poems and books in favour of beef were written. Coming from North Eastern part of India, growing up with tribal, Christian friends who ate both beef and pork (forbidden for the Muslims), I thought it was an apt name to scandalize all the above-mentioned stakeholders. Further, the book is a tribute to northeast and its people, especially the state of Meghalaya, where pork remains the most favorite meat.

TLY: You have also published the chapbook Joining the Dots. It is a book of poems primarily about places and passing through. But why “dots?”

Goirick: I am from the Northeast, specifically from lower Assam, the first part of Pork is also a journey from the plains of Assam to the hills of Meghalaya. There is a lot of historical antagonism between the people of hills and plains in Northeast India. These can be attributed to ownership of land and resource, level of exposure, jobs, and historical blunders. In that sense dots appear as no man’s land between the plains and hills in Pork. Geographical coordinates without a name or an identity where I intentionally try to work on the changing landscape and fusing ethnicity, coexistence.


Joining the dots appeared out of one of my many trips to Himalayas, specifically Himachal Pradesh, a state known for its peace and beauty. Unlike the gore, ethnic tensions and multiple identity crises in the hills of North East India, these hills were higher and stranger, forlorn. They gave me new horizons to forget reality. It was an escape of sorts, a hallucination of mathematical coordinates and horizons, directions. Dots was about the ice and the river, the distance the moon has travelled, and a measure of how much I was able to forget my human self.

TLY: In Japanese culture, there is a tradition of traveling poets—one of the most well-known being Matsuo Basho. Is there a similar tradition in India?

Goirick: There are many. Being a Bengali, I would start with Bauls, the wandering minstrels. They sing of Allah and Krishna in the same song, just like the Sufis from the western borders of India. Both folk, religious movements, if I may call them so, sects that were born during the time of Bhakti Movement. Further, almost every tribal group in India, be it be from the eight north eastern Indian states or from Bengal, Chhattisgarh, Jharkhand and Orissa have their own travelling poets who sing their poems. Besides, in every state in India, there are various versions of folk songs and travelling singer-songwriters. Most of it is in the oral tradition and like blues is covered from generation after generation with some changes in the lyrics.

TLY: As mentioned, you are one of the founders of The Sunflower Collective. How did the collective come about?

Goirick: I grew up listening to a lot of American Rock, Blues and Jazz music. North Eastern part of India, probably because of its access to Christianity was always high on what we would call “Western Music”.

During my teens, I would listen to a lot of Led Zep, Deep Purple, Beatles, Rainbow, Queen, Clapton, Simon and Garfunkel, Tom Petty et al. Back home my mom would make sure I would eventually listen to enough Indian classical. That made me interested in fusion acts like John Mclaughlin’s Shakti and eventually to Mclaughlin’s gurus: Miles, Coltrane and Evans… onto Bird and others.

Dylan was always there. We always heard him on the Shillong Radio. Only when I took Economics as my major in Grads did I understand what he was singing about. Gradually I figured out Robert Johnson and Lead Belly and the entire delta blues/ragtime gang. I have been writing lyrics and singing with a band since college.

Later, I heard Ginsberg and Kerouac in Martin Scorsese’s Dylan documentary No Direction Home and was blown away. They seemed to me, talking and writing like Miles and Charlie Parker, if not Coltrane.

Since then, I digged all of the poets associated with the Beat Generation, and later around 2009, I found there were groups of poets, The Hungry Generation writers (Beats’ counterparts) from Bengal. I started reading their work too. I did not know much about them and could not write or read Bengali, my mother tongue. So, I asked some of my friends to read some of the poems for me. They read a few, but denied to read further since most of them seemed very obscene.

I met Abhimanyu in 2014 at a local bar over drinks. We knew each other since we were both published in an Indian magazine, I was volunteering for. Both of us bonded over Beats and decided to start the collective. Then Uttaran, who was already translating the Hungrys joined us, and then I asked you and Kevin to join in.

TLY: Wet Radio, your most recent collection of poems, has just been released. The title poem begins, “Rain has no gender.” In what sense?

Goirick: I think I have a lot of feminine traits. Though I will not exactly call myself a bisexual, I do try to exchange gender roles with my wife often at home. Rain in this poem though signifies tears. I was, across my school life, called a girl for being the crybaby. I was questioning the masculinity of men who do not cry in this poem.

TLY: Music is a continuous theme throughout your work. You have many influences. Would you care to share them?

Goirick: I think I have already shared them above. I love most styles of music, from Metal to Jazz to Blues, country, folk, Indian Classical, various Indian folk, to even intelligent electronica. I am a bit averse to Bollywood music and glittery pop since childhood.

TLY: You refer to poetry as an owl in one of the poems in Wet Radio. It’s a complex poem in which poetry stalks and hunts, but also goes through transformations—becomes other things. Could you talk about how the poem came to be?

Goirick: It is a political poem. It is about thinkers under a fundamentalist Hindu or Muslim-Nazi rule. The poem is a part of a series ‘Red is the colour of a poem’ dedicated to the famous Pakistani poet ‘Faiz Ahmed Faiz’.

TLY: Thank you so much, Goirick, for sharing your poetry and giving us time so we can learn more about you. We here at TLY have always been great admirers of your poetry. Your work is beautiful and startling. Congratulation on the new book!

Goirick: Thanks for the opportunity.

More about the poet

Originally from Silchar, Assam, Goirick Brahmachari’s debut collection of poems, For the Love of Pork (Les Editions du Zaporogue, Denmark) won the Muse India – Satish Verma Young Writer Award(Poetry) 2016. He is the winner of prestigious Srinivas Rayaprol Poetry Prize, 2016. His poems have appeared in Berfrois, The Missing Slate, Nether, and The Four Quarters Magazine, among others. He co-edits The Sunflower Collective’s blog:The Sunflower Collective. 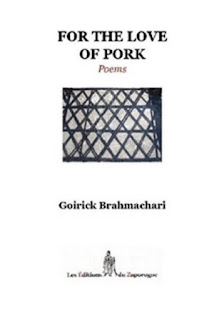 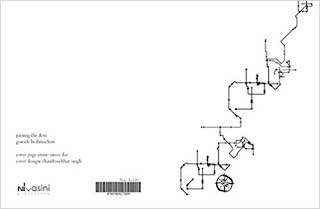 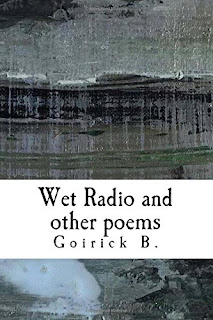