Man on the Run: Leon Trotsky in Exile

Forward to the 1958 edition


Four decades after the Russian Revolution, three decades after he lost power and homeland, two decades after his grisly murder, and while he is still but a Judas figure in his native Russia, Leon Trotsky continues to command interest. Whether the interest stems from his personality, his role in history, or the drama of his life, he is to many today a veritable Hero of Our Time.

It is all the more striking how little is known about Trotsky's life after his banishment from Russia in 1929. One may, perhaps, be able to recall that his first asylum was Turkey, that he was unable to leave there until France admitted him in 1933 for two years, that Norway then received him for a brief and harassed year and a half, and that only during the last four years or less in Mexico did he find a bearable if distant refuge. One may remember, too, that as an exiled revolutionary of world- wide fame Trotsky organized the small but active Fourth International and wrote extensively, notably My Life and the widely read History of the Russian Revolution. Yet such recollections are bound to be hazy. Not least among the reasons is that up to now the reconstruction of Trotsky's dozen post- Soviet years has been limited to a brief work in French by Victor Serge, and the two volumes issued on the eve of World War II by John Dewey's Commission of Inquiry into the Charges Made Against Leon Trotsky in the Moscow Trials: The Case of Leon Trotsky and Not Guilty.


This paucity adds value to what is in any event a singular document-a previously unpublished diary of the exile period. The present volume contains the complete text of the only extant document of this sort by Trotsky. It is the diary he kept in France and Norway in 1935, from February 7 to September 8. Also made public for the first time in this volume is Trotsky's brief but hardly less remarkable Testament. It consists of three testamentary statements-political, personal, and legal-which he wrote in Mexico in the spring of 1940, half a year before his death.

What is the background of the Diary of 1935 and its central themes? 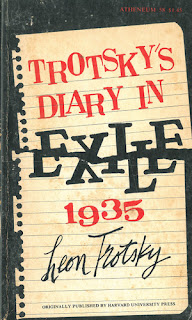 Trotsky turned to a genre he did not otherwise find congenial for a reason extremely interesting to the historian. Unperceived until now, this was Trotsky's recognition, in the mid-1930's, of profound changes in his life. The Diary coincides with the culminating phase of this crisis, which had begun two years earlier in 1933. The crisis was in part political, in part personal. The Diary reflects both of these aspects more fully than anything else Trotsky ever published. It does so through a plethora of unrelated and often miscellaneous entries, big and small, political and non-political, some augmented by, or even in the form of, newspaper clippings. Although much of the Diary gives the impression of being written with future publication in mind, the author makes no attempt to relate his separate entries to each other, or to indicate each time why he is commenting on a given topic. It is important, however, to keep in mind that some aspects of Trotsky's life are clearly reflected in the Diary, others are only dimly glimpsed, and some do not appear at all.

On the political level, Trotsky had been deeply shaken in 1933 by Hitler's rise to power and the failure of the German parties of the left to resist. During the following year, 1934, his forebodings about the future were intensified by two events: in France, the now-forgotten right-wing upheaval of February 6, and in the U. S. S.R., the assassination of Kirov. Together, these developments in Germany, France, and Russia forced an end to a major phase in Trotsky's thinking. Now the perspective shifted from the hope of influencing Communism from within the Third International, and hence returning to the U. S. S.R. before too long, to the idea of a separate Fourth International to counteract the prophesied triumphs of fascism and Stalin over an enfeebled Europe.

In the Diary, this abstract political level of Trotsky's crisis in exile is interwoven with his general character: the revolutionary intellectual in politics, the 'outsider ' with his ideologies. His particular variety of politics dominates the Diary, be the entries about the novels he has just read, life in Norway or France, or individuals in the news. The reader will find echoes of Trotsky's lifelong polemics on current events, his once well-known commentaries on literature and human relations, above all his absorption in ideology. Here, as elsewhere, Trotsky indicates no ideological doubts or even soul-searching. His own verities remain unchanged: the proletariat, socialism, world revolution, Marx and Lenin, History. A related political theme is the Russian Revolution, the decade that followed, and especially Trotsky's recollections of Lenin. In its running commentary on current events, the Diary condemns mercilessly all movements and leaders between the advancing fascism and Stalin, while voicing a qualified hopefulness about the gathering of new forces behind the author's own position.


The diary is not a literary form I am especially fond of; at the moment I would prefer the daily newspaper. But there is none available .... Cut off from political action, I am obliged to resort to such ersatz journalism as a private diary. At the beginning of the war, when I was confined in Switzerland, I kept a diary for a few weeks. Later, after being deported from France to Spain in 1916, I did so again. I think that is all. Now once again I have to resort to a political diary. Will it be for long? Perhaps months; in my case not years. Events must come to a head in one way or another and put an end to the diary-if it is not cut short even sooner by a surreptitious shot directed by an agent of . . . Stalin, Hitler, or their French friend-enemies.

Lassalle wrote once that he would gladly leave unwritten what he knew if only he could accomplish at least a part of what he felt able to do. Any revolutionary would feel the same way. But one has to take the situation as it is. For the very reason that it fell to my lot to take part in great events, my past now cuts me off from chances for action. I am reduced to interpreting events and trying to foresee their future course. At least this occupation is more satisfying than mere passive reading.

Here my contacts with life are almost entirely limited to the newspapers and partly to letters. It will not be surprising if my diary tends to take the form of a review of newspapers and periodicals. But it is not the world of the newspapermen as such that interests me, but the workings of the deeper social forces as they appear reflected in the crooked mirror of the press. However, I naturally am not committing myself in advance to this form. The advantage of a diary-alas, the only one-lies precisely in the fact that it leaves one free from any literary requirements or prescriptions.

February 8 It is hard to imagine a more painful occupation than reading Leon Blum. Although he is an educated and, in his way, intelligent man, he seems to have set himself the aim in life of uttering nothing but parlour trivialities and pretentious nonsense. The explanation for this is that he is a political has-been. Our whole epoch is not for him. His minuscule talents, suitable for parliamentary lobbying, seem wretched and paltry in the awesome whirlpool of our days.

In today's issue, there is an article devoted to the anniversary of February 6th. Of course ' Ie fascisme n'a pas eu sa journee!' But still, Flandin is far from being equal to the situation: ' les emeutiers fascistes se fortifient contre sa faiblesse.' Blum, the tower of strength, reproaches Flandin for his weakness. Blum presents Flandin with an ultimatum: ' Pour ou contre l'emeute fasciste!' But Flandin is by no means obliged to choose. All his 'strength ' lies in the fact that he stands between l' emeute fasciste and fa defense ouvriere. The weaker Blum and Cachin are, the nearer the resultant force approaches the fascists

In L' Humanite there is the same triumphant headline: ' Ils n' ont pas eu leur journee!' It was the weak Flandin who provided this triumph for the mighty 'United Front'. The threat by the United Front to bring the workers out onto the Place de la Concorde, i.e., to expose the unarmed and unorganized masses to the guns and brass knuckles of militarized gangs, would have been criminal adventurism if it had been a serious threat in the first place. But it was mere bluff [in English], arranged in advance with the 'weak' Flandin. In the good old days Victor Adler used to be a past master of such tactics, and where is his party now . Today's denunciations of Flandin both in Popu and in Huma are a mere cover-up for yesterday's agreement with him. These gentlemen think they can cheat history. They will only cheat themselves.

Meanwhile, Le Temps is fighting against corruption and the decline in morals.

February 9 Rakosi has been sentenced to hard labour for life. He behaved with revolutionary dignity-after several years in prison. In any case, it was certainly not the protests of L' Humanite, which hardly evoked any response, that saved him from execution. A much more important factor was the tone of the large metropolitan French press, beginning with Le Temps. That paper was 'for' Rakosi against the Hungarian government, just as it had been 'against ' Zinoviev for Stalin's justice-in both cases, of course, out of ' patriotic' considerations. And what other considerations might Le Temps have?

In the Zinoviev case, to be sure, there were also considerations of social conservatism: the Moscow correspondent of Le Temps, who evidently knows very well where to look for directives, stressed several times that Zinoviev, like all the oppositionists now being persecuted, stood to the left of the government. and that therefore there was not the slightest basis for alarm. It is true that Rakosi stands to the left of Horthy-a great deal to the left, in fact-but in this case it is a matter of doing a small favour for the Kremlin. A disinterested one, we must assume.

The Ministry of the Interior has forbidden the workers' counter-demonstrations scheduled for February loth. By demanding of the ' weak' Flandin that he dissolve the fascist leagues, Cachin and Blum strengthen his hand against the workers' organizations. The machinery of neo-Bonapartism is evident. Cachin-Blum will of course revile Flandin in print-which benefits Flandin as much as it does them. At heart these gentlemen will rejoice at the ban against workers' demonstrations; everything will get back to normal, God willing, and they will be able to continue their useful function as oppositionists.

The number of strikers receiving assistance has meanwhile grown to 483,000. Blum sent Frossard to make a speech in the Chamber of Deputies on the question of the strikers. This is really addressed to the bourgeoisie and means 'Don't get upset about the strikers. They are no threat to you. Just preserve the parliament and our liberties for us.'