I arrived in Sao Paulo to overcast skies and chilly weather. Winter. Back home, in the Berkshires, it was summery August.  Over night, the calendar had skipped six months ahead. I was completely turned around, and exhausted. I’d never flown before, and you could say that, basically, I spent the flight in a state of high anxiety. 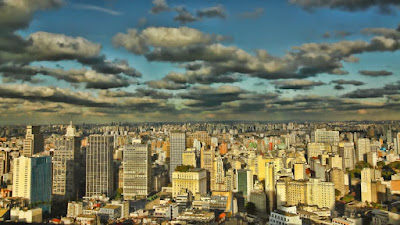 Before take-off, my mother had waited with me in the airport lounge at JFK making upbeat conversation, talking about her many travels. She was a college professor—art history, drawing—and part of the job involved taking her students abroad. She was abroad a lot, which was fine with me. We had arrived at a difficult stage in our mother-daughter relationship. I drove her crazy and she made me miserable. Between us, it was one fight after another, and much of it because of my friends. As friends went, she was convinced I couldn’t have chosen worse. When my dearest friend Julie and I got caught smoking—well, to my mother, it was the beginning of the end. Julie and I were behaving the same as most teens, and back then stealing your parents’ cigarettes was routine. Although, not from my parents, who were devotees of Jack LaLanne, also known as the godfather of modern fitness. My parents didn’t eat sugar, white flour, and they didn’t smoke Marlboro Reds. Julie’s mother did smoke. She bought her Marlboro's by the carton—stacks of them. A few cigs would hardly be missed, Julie and I figured. We were careful to dispose of our stolen goods by flushing the butts down the toilet. Somehow, the damn things ended up back in the bowl, like fish returning to spawn. My mother was livid. I was forbidden to see Julie again, or anyone else within a twenty mile radius for that matter. There were two things my mother expected of her kids: we were to have as little to do with the neighbors as possible and make it to college. Going to Brasil as an exchange student worked wonders on my disapproval ratings. Brasil was about as far from the neighbors as you could get, and significantly increased my chances of being accepted to a college. For my mother, my leaving was her victory. She reveled in seeing her daughter off on her first flight, one that would take me over thousands of miles of land and ocean

If that flight was half-booked, I’d have been surprised. I had an entire row of seats to myself. I kept looking around the cabin in the hopes there were other Americans my age on board. I would have thought there’d be a group of us traveling to Sao Paulo, a contingent of American youth eager for exchange and adventure. As it was, there was no one to talk to but the flight attendants. I spent a long night in which we flew through foul weather. Lightning strikes ricocheted among the clouds; torrential rains beat at the windows (let us in, let us in!); turbulence bounced the plane up, down, east and west. Thirteen hours passed before the wheels of the plane found the tarmac, and the flight powered to a violent halt. It was then I learned one of many travel customs: people of all nations clap and cheer during landings. How could they not? Their prayers have been answered: they survived the flight. They were alive.

But, I imagine that readers who pass this way have forgotten how this story began.

I was sitting in class listening to a fellow student talk about her year abroad.  Paris, to be precise. She'd spent a year in Paris as an exchange student. A lovely year in every way, as she described the experience.  She lived with a French family, and it had been great.  She went to school, and it had been great.  She learned French, and her French was great. By the time she finished her presentation, it was decided:  I too would go to Paris.


Back then, before the Internet, you didn't hear much about Brasil where I grew up.  Honestly, I had no idea where I was going.  But, I was going, and that is how I would come to understand the true meaning of "no turning back."

Kathryn A. Kopple works in Spanish and English. She translates for TED in their outsourcing program. She has published original poetry and prose in numerous publications, including The Threepenny Review, The Bellevue Review and The Shell Game (anthology, U of Nebraska Press). She is the author of Little Velásquez (Mirth Press), a novel set in 15th century Spain.