On Board Ship, an excerpt from Tristes Tropiques by Claude Levi-Strauss


That one civilization is ending and another beginning; that our that our world has suddenly found itself to be too small for the people who live in it: these are facts which became real to me, not because of figures or statistics or revolutions but because I happened, a few weeks ago, to make a certain telephone call. I had been playing with the idea of retrieving my youth by a return visit, after fifteen years, to Brazil. The answer was that I should need to book my cabin four months in advance. 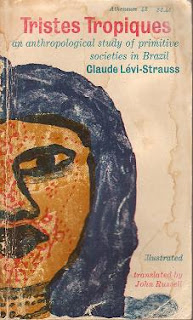 And I had imagined that, since the establishment of regular air- services between France and South America, the sea route was the preserve of a few eccentrics! It is, alas, a mistake to suppose that because one element has been invaded the other has been set free.

But in between the marvellous voyages of 1935 or thereabouts and the one to which I returned an immediate No there was one, in 1941, which was charged with symbolic meaning for the years to come. Shortly after the armistice I was invited to the New School for Social Research in New York. (This I owed in part to the friendly interest which had been taken in my work by Robert H. Lowie and Alfred Metraux, in part to the vigilance of relations of mine long settled in the U.S.A., and, finally, to the Rockefeller Foundation s scheme for the rescue of European scholars who might find themselves menaced by the German occupation.) The problem was: how to get there? My first idea was that I should pretend to be returning to Brazil in order to continue my pre-war researches there. I went to the ground-floor rooms in Vichy, where the Brazilian Embassy had set up its temporary home, and asked to have my visa renewed. The interview was cruelly brief. I was well known to the Ambassador, Luis de Souza-Dantas, and he would, in any case, have behaved in the same way had I not known him. He was just raising his hand to stamp my passport when one of his staff reminded him, in tones of chilling respect, that under the new regulations he could no longer renew visas. For several seconds his arm remained poised, and there was a look almost of entreaty in his eyes as he tried to make his junior turn aside for a moment. My passport once stamped, I could at least have left France, even if I could not get into Brazil. But he wouldn t; and at length the Ambassador had to let fall his hand wide of my passport. No visa for me; he handed me back my passport with a gesture of distress.

I went back to my house in the Cevennes not far from where, at Montpellier in fact, I had been demobilized and began to hang about Marseilles harbour. Eventually I heard a rumour that a ship wpuld soon be sailing for Martinique, and, after a great deal of to-ing and fro-ing from quayside to office and back again, I discovered that this ship belonged to that same Compagnie des Transports Maritimes which had found such a faithful and exclusive clientele among the members of our academic mission to Brazil. The winter bise was blowing keenly when, in February 1941, 1 walked into the company s unheated and three-quarters-closed offices. The official was one who had been wont to come and greet us on the company s behalf. Yes, the ship did exist; yes, it would shortly be leaving. But I couldn t possibly go on it. Why not? Well, I didn t realize how things were; he couldn t explain, but it wouldn t be at all what it used to be. How, then? Oh, it would be endless, and so uncomfortable! He couldn t imagine my putting up with it.

The poor man still saw me as a small-bore ambassador of French culture, but I saw myself as marked down for a concentration camp. Moreover, I had spent the previous two years, first in the virgin forests of Brazil, and later in one improvised billet after another in the course of a disorderly retreat that had taken me from the Maginot Line to Beziers by way of the Sarthe, the Correze, and the Aveyron: cattle- trains on the one hand and sheepfolds on the other: so that my inter locutor s scruples seemed to me out of place. I saw myself going back to my wandering life but on the oceans this time, sharing the labours and die frugal repasts of a handful of seamen, sailing hither and yon on a clandestine vessel, sleeping on deck, and gaining in health and strength from the day-long nearness of the sea.

I did at last get a ticket for the Capitaine Paul Lemerle. When the time came to embark the quayside was cordoned off. Helmeted gardes-mobiles, with automatic pistols at the ready, severed all contact between passengers and the relatives or friends who had come to see them off. Good-byes were cut short by a blow or a curse. This was not the solitary adventure I had had in mind; it was more like the departure of a convict-ship. If I had been amazed by the way in which we were treated, I was dumbfounded by our numbers. Somehow or other we were to be three hundred and fifty on board a little steamer which as I lost no time in discovering could boast only two cabins, with in all seven couchettes. One of these cabins had been allotted to three ladies, and the other was shared between four men, of whom I was one. This favour I owed and may I thank him here and now to M.B., who felt that it was out of the question for one of his former first-class passengers to be quartered like a cow or a pig. And, indeed, all the other passengers men, women, and children had to pile into the dark and airless hold, where the ship s carpenters had made a rough scaffolding of beds, one on top of another, with pallets of straw for bedding. Of the four fortunate males, one was an Austrian, travelling in metals, who doubtless knew what he had paid for the privilege; the second was a young beke , a rich Creole, who had been cut off from his native Martinique by the war; he deserved special treatment in that he was the only person on board who was not presumed to be either a Jew, a foreigner, or an anarchist. The third was a mysterious North African who claimed to be going to New York for just a few days (in itself an extravagant notion, since we were to be three months en route), had a Degas in his luggage, and, although as Jewish as I myself, appeared to be persona grata with the police, immigration, and security authorities of every colony and protectorate that we touched upon: an astonishing and mysterious state of affairs, at that juncture, and one which I never managed to fathom.

The scum, as the gendarmes described us, included among others Andre Breton and Victor Serge. Breton, by no means at his ease in such a situation, would amble up and down the rare empty spaces on deck, looking like a blue bear in his velvety jacket. We were to become firm friends in the course of an exchange of letters which we kept up throughout our interminable journey; their subject was the relation between aesthetic beauty and absolute originality.
at July 01, 2017