An Allegory of Man and His Sahara

fter several literary seasons given over, mostly, to the frisky antics of kids, precociously knowing and singularly charming, but not to be counted on for those gifts that arrive by no other way than the experience and contemplation of a truly adult mind, now is obviously a perfect time for a writer with such a mind to engage our attention. That is precisely the event to be celebrated in the appearance of "The Sheltering Sky," Paul Bowles' first novel. 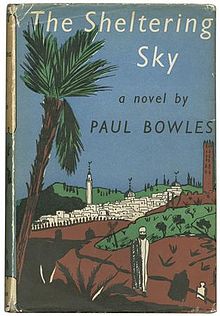 It has been a good while since first novels in America have come from men in their middle or late thirties (Paul Bowles is 38). Even in past decades the first novel has usually been written during the writers' first years out of college. Moreover, because success and public attention operate as a sort of pressure cooker or freezer, there has been a discouraging tendency for the talent to bake or congeal at a premature level of inner development.

In America the career almost invariably becomes an obsession. The "get-ahead" principle, carried to such extreme, inspires our writers to enormous efforts. A new book must come out every year. Otherwise they get panicky, and the first thing you know they belong to Alcoholics Anonymous or have embraced religion or plunged headlong into some political activity with nothing but an inchoate emotionalism to bring to it or to be derived from it. I think that this stems from a misconception of what it means to be a writer or any kind of creative artist. They feel it is something to adopt in the place of actual living, without understanding that art is a by-product of existence.

Paul Bowles has deliberately rejected that kind of rabid professionalism. Better known as a composer than a writer, he has not allowed his passion for either form of expression to interfere with his growth into completeness of personality. Now this book has come at the meridian of the man and artist. And, to me very thrillingly, it brings the reader into sudden, startling communion with a talent of true maturity and sophistication of a sort that I had begun to fear was to be found nowadays only among the insurgent novelists of France, such as Jean Genet and Albert Camus and Jean-Paul Sartre.

With the hesitant exception of one or two war books by returned soldiers, "The Sheltering Sky" alone of the books that I have recently read by American authors appears to bear the spiritual imprint of recent history in the western world. Here the imprint is not visible upon the surface of the novel. It exists far more significantly in a certain philosophical aura that envelopes it.

There is a curiously double level to this novel. The surface is enthralling as narrative. It is impressive as writing. But above that surface is the aura that I spoke of, intangible and powerful, bringing to mind one of those clouds that you have seen in summer, close to the horizon and dark in color and now and then silently pulsing with interior flashes of fire. And that is the surface of the novel that has filled me with such excitement.

The story itself is a chronicle of startling adventure against a background of the Sahara and the Arab-populated regions of the African Continent, a portion of the world seldom dealt with by first-rate writers who actually know it. Paul Bowles does know it, and much better, for instance, than it was known by AndrÈ Gide. He probably knows it even better than Albert Camus. For Paul Bowles has been going to Africa, off and on, since about 1930. It thrills him, but for some reason it does not upset his nervous equilibrium. He does not remain in the coastal cities. At frequent intervals he takes journeys into the most mysterious recesses of the desert and mountain country of North Africa, involving not only hardship but peril.

"The Sheltering Sky" is the chronicle of such a journey. Were it not for the fact that the chief male character, Port Moresby, succumbs to an epidemic fever during the course of the story, it would not be hard to identify him with Mr. Bowles himself. Like Mr. Bowles, he is a member of the New York intelligentsia who became weary of being such a member and set out to escape it in remote places. Escape it he certainly does. He escapes practically all the appurtenances of civilized modern life. Balanced between fascination and dread, he goes deeper and deeper into this dreamlike "awayness."

From then on the story is focused upon the continuing and continually more astonishing adventures of his wife, Kit, who wanders on like a body in which the rational mechanism is gradually upset and destroyed. The liberation is too intense, too extreme, for a nature conditioned by and for a state of civilized confinement. Her primitive nature, divested one by one of its artificial reserves and diffidences, eventually overwhelms her, and the end of this novel is as wildly beautiful and terrifying as the whole panorama that its protagonists have crossed.

In this external aspect the novel is, therefore, an account of startling adventure. In its interior aspect, "The Sheltering Sky" is an allegory of the spiritual adventure of the fully conscious person into modern experience. This is not an enticing way to describe it. It is a way that might suggest the very opposite kind of a novel from the one that Paul Bowles has written. Actually this superior motive does not intrude in explicit form upon the story, certainly not in any form that will need to distract you from the great pleasure of being told a first-rate story of adventure by a really first-rate writer.

I suspect that a good many people will read this book and be enthralled by it without once suspecting that it contains a mirror of what is most terrifying and cryptic within the Sahara of moral nihilism, into which the race of man now seems to be wandering blindly.

Mr. Williams is the author of "A Streetcar Named Desire" and other plays.