Why I Wrote Other-Wise

by
Robbi Nester
In a lifetime of writing, I managed to avoid the experiences that had most shaped me—until recently. These experiences involved trauma I suffered as a child and young adult as the daughter of mentally ill parents in an extended family marked by neurological difference and dysfunction. For me, as for many children who survive challenging early lives, books and writing offered refuge, both literally in the form of the library across the street, to which I escaped on a regular basis, and figuratively, by offering me an inkling of a world beyond the one I was born into where I might find a place. Yet even though these elements have to some degree shielded me from the full force of these difficult experiences, by themselves, they proved an insufficient as wielding an umbrella against a tsunami. It was not until I had gained sufficient understanding of my past and sufficient experience as a writer that I was ready to tackle this subject matter in my second full collection of poetry, Other-Wise, recently released by Kelsay Books. 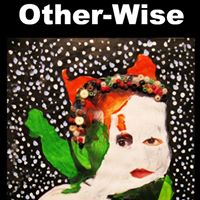 Other-Wise (Kelsay Books)
A writer’s first book often tends to be drawn from the well of childhood experience, but thereafter, many maintain, autobiographical material dwindles as other concerns move into focus. Yet that has not been the case with me. In my first full collection of poems, A Likely Story (Moon Tide, 2014), only a few of the poems arose out of my early experience, leaving the majority of significant and emotional material from that time untouched.
There was a reason for this, even if it wasn’t one I consciously contemplated at the time. My early life challenged me in ways I didn’t feel ready to scrutinize too closely at that point. I was the victim of abuse at home and in my community. Even at school, which should have been my sanctuary, I was instead publicly shamed for my math disability and problems with handwriting and spatial reasoning. Teachers paid so much attention to my shortcomings they didn’t seem to notice my significant strengths. It was an unforgiving world, though I was an outgoing and friendly child, who spoke to everyone I met, even the bullies who tormented me.
My parents were no help because they were occupied with their own struggles. My father suffered from untreated Tourette Syndrome, OCD, and bipolar disorder. He could be funny and charming, generous and amusing, but his moods changed in an instant, and he was often violent, particularly since I refused to cringe before him in fear, as my mother did.
For her part, my mother suffered from crippling anxiety, and perhaps a bit of agoraphobia. In later years, she developed dementia, and became a full-blown hoarder. I could not count on her to protect me from my father’s rages or my teachers’ unfairness. She could not even protect herself.
I knew that I could not access my emotional core as a writer until I dealt with these experiences, which still exerted all too much power over my adult life, so armed with years of therapy and experience as a writer, I tackled the most painful episodes of my earlier life in poetry.
When I first decided to write about these experiences, I imagined that I could exorcise their effect on my life entirely, as an oyster transforms irritants to luminous pearls by secreting layers of nacre over grains of sand and grit. However, I found that human beings, while adaptable, cannot shed life’s insults so thoroughly. In fact, in the process of writing the poems, I found that in order to write about my past, I had to relive those experiences I had shoved into the darkest part of my mental closet. This experience triggered undiagnosed P.T.S.D., which lay behind a lifetime of anxiety, phobias, and panic attacks. But I did not stop working on these poems, feeling that I had to keep walking through the darkness if I were ever to emerge on the other side.
Yet Other-Wise does not dwell fully on this darkness. these poems do not by any means occupy the majority of the book. Just as my life has been only partially occupied by this painful material, I felt that the book should embody the variety of my world. These poems take up less than ¼ of the collection. The first section, “Them,” is composed of poems about the natural world; “Us” is made up of poems about human relationships and other human phenomena. “Me” holds the autobiographical poems in question; while the final section, “The Others,” contains poems about legendary and imaginary creatures.
It is not just the subject matter of the poems that varies. Stylistically, the poems in the first and fourth sections tend to be heavily imagistic. The diction at times can be a touch technical, formal, or odd. On the other hand, many of the poems in the second and third section rely less on images. Syntactically, they can be plainer than the poems in the other sections. In the menagerie of my work, they are an entirely different species.
It is important to me to share these dark parts of my life, which are after all part of who I am. I am driven to do this not just for myself, but also for others who have survived such experiences. Though writing these poems was very difficult, since I had to confront things I had buried so many years ago, I am now largely free of the freight I once carried because I have written these poems. I hope that some of my readers will be encouraged by reading them to face their dark pasts for themselves, though they should be warned that this will force them to relive experiences they have long tried to forget.
There may be consequences, as there were for me.  The process was fraught with dangers, panic attacks and other responses to opening these sealed doors and windows, uncovering the mirrors of my haunted past. Yet averting one’s eyes also has consequences that could conceivably last the rest of a lifetime. Is it better to face the monster under the bed, or spend the rest of the night fearing it, imagining its fearsome dimensions? Those who brave the journey into their own pasts may, as I did, require a guide in this process, who can help them face what emerges from the darkness.

More about Robbi
Robbi Nester is the author of three books of poems, a chapbook, Balance (White Violet, 2012), and two collections of poetry, A Likely Story (Moon Tide, 2014) and Other-Wise (Kelsay, 2017). She has also edited two anthologies, The Liberal Media Made Me Do It! (Nine Toes, 2014) and an ekphrastic e-anthology, Over the Moon: Birds, Beasts, and Trees--celebrating the photographs of Beth Moon. Her poetry, reviews, essays, articles, and blog posts have appeared widely.