Adam and Eve: A Love Story 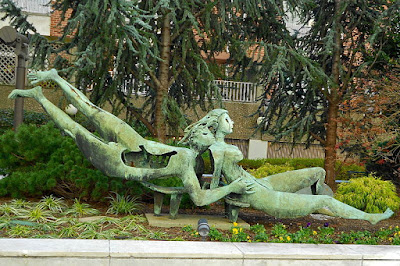 Adam and Eve had all of paradise to themselves. They spent hours lounging in the sun, unaware that the burning orb above them had a name. When the stars appeared overhead they smiled, although why they couldn’t say. They had no experience with loss or yearning. They were in love without the faintest idea of what love meant. When they slept entwined in each other’s arms, no dreams disturbed their slumber. Nothing from above or below troubled them, not even the snake lurking under the rock, the one that showed up unannounced at dusk, his wings still smoldering from the descent. Adam and Eve weren’t afraid. The snake looked vaguely comical: half angel, half serpent. What did they know of demons or angels? Lacking in foresight, with no conception of time, they went about their days as lovers do— in a kind of divinely induced fog, blissfully oblivious of the serpent: its cunning nature, its appetite for revenge.  How it would wrap its slippery coils around her. How Adam would recognize too late his error. Why they would never be satisfied with anything anymore. Not a day passed in which they didn’t pine for a patch of sun a little brighter, a far-away vacation spot where pampered and no longer arthritic, they would be restored to their original selves—although that too seemed entirely mythical. But then, one night, after decades of marriage, after he had stood by her in childbirth and she had nursed him through a bout of flu, they stopped arguing and looked at each other, simply and honestly, and realized that, yes, they had squandered their happiness. And yet they had a roof over their heads and food on the table. And they had the children.  They made peace with their mistakes. Later that week, when Adam showed up with flowers, Eve finally forgave him for his selfishness, and he forgave her for getting fat. They took off all their clothes, every stitch, and they stood naked at the bedroom window, with the shades flung open and the Milky Way undulating above them. They made love—the way men and women do: in a strange tangle of limbs, kisses full of wet enjoyment, and miraculously blind to each other’s imperfections.

As Author:  Kathryn A. Kopple works in Spanish and English.  "Rubik's Cube: Six Twisted Paragraphs" is forthcoming in The Shell Game Anthology (Univ. of Nebraska Press).  She is the author of the novels Little Velasquez and The Leaving Year.
at May 22, 2017