Literature in Ladino Gets Another Life

Recent discoveries of texts from the Judeo‐Spanish vernacular known as Ladino— some of which had been lost for almost four centuries—are being made available in English for the first time.

Ladino, the language of Sephardic Jewry, is becoming extinct, like Yiddish. Ladino is spoken today by under half a million people, of whom 200,000 live in Israel.

In an introduction to “The Sephardic Tradition,” a book of English translations of Ladino poetry and folklore from the 16th and 17th centuries, Moshe Lazar, the editor, says the work was rushed into print “as a tribute and a memorial to Spanish Sephardic literature on the eve of its disappearance.

The 222‐page volume will be published Jan. 14 by W. W. Nbrion under the sponsorship of the Commission on Adult Education of B'nai B'rith. The book has been adopted as part of the UNESCO Collection of Representative Works, a series devoted to translations of rare languages.

To salvage the Ladino heritage, scholars have been searching for manuscripts in libraries in many countries, among them Spain, Italy and Israel, as well as taping poems and proverbs recited by elderly Sephardic Jews, mostly in Israel and Latin America.

As a result of the research, the book publishes for the first time the full 303 stanzas of the Poema de Yocef, a poetic adaptation of the story of Joseph, dating hack to the first half of the 15th century. It was written in Spanish with Hebrew letters. The poem, which the scholar found in the Vatican Library, had previously been known from a manuscript at Cambridge University with only 30 stanzas. That was published in 1930 by the Spanish philologist Gonzalez Llubcra.

The first and last stanzas of the new version, translated by Professor Lazar and David Herman, follow:

Of him our Holy Scriptures the following relate

In words of witnesses who were so fortunate.

That they saw his face so gentle and stature so great.

For in truth a giant was he and his name was Joseph.

When Israel came out of her great captivity.

A coffin was made Joseph for to carry.

And in Shekem they did bury him.

Where once in that place they had sold Joseph.

Ladino, known over the centuries under such names as Romance, Judezmo and Spaniolit, is a mixture of Spanish, Portuguese, Hebrew, Arabic and other dialects Spanish Jews accumlated in their dispersal after their expulsion from the Spanish peninsula in 1492

Proverbs, transliterated from Hebrew into Latin script (the Hebrew words are italicized) that are also reproduced in the book.

Professor Lazar, who was in New York recently on a lecture tour, said in an interview that the proverbs dated from the secular period of Sephardic literature beginning in the 15th century and reflected the satire and humor of the Spanish tradition as well as some biblical material. 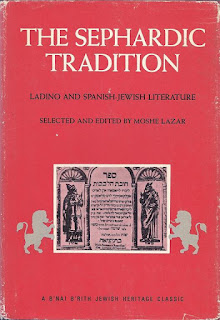 After the dispersion of the Spanish Jews in the 16th and 17th centuries, he said, their folklore would incorporate songs and poems about their Christian neighbors and such themes as war, priests and adulterous wives.

Professor Lazar, who has just resigned as Chairman of the Romance Language Department of Hebrew University at Jerusalem to head the Fine Arts faculty at the University of Tel Aviv, noted that the oral tradition—where one generation treasure: Their memory, for they stemmed from the repression of the Jews’ faith by the Inquisition.

Professor Lazar declared: “When the Jews were forced to flee they kept only one treasure: their memory, for they had neither their bibles nor their books.”

Credits:  This article was first published in 1971.  It can be found The New York Time Archives. It has been edited slightly for clarity.
at December 17, 2018