In the biggest metropolis in the Western world, amid drug wars, earthquakes and swine flu, 92-year-old Leonora Carrington opens the biscuit tin resting on her oilskin Liberty tablecloth. "Do you want more tea?" England's last living Surrealist asks politely. Bronze statues, child-size casts of Carrington's frighteningly powerful imagination, lurk throughout her Mexico City townhouse. A masked pig peers out from under a hat stand. Something half human skulks under the stairs. But Carrington is unfazed by monsters; she has been conjuring them all her life. 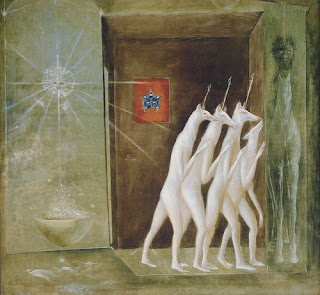 Leonora Carrington
The Unicorns and the Ghost in the Wall

Carrington is a painter, writer, sculptor, alchemist, visionary, and was the darling of the 1930s Surrealism movement. Now, after decades of absence from the English art scene, her work was presented at Angels of Anarchy, a major exhibition of women Surrealists at the Manchester Art Gallery next month.

Throughout a seven-decade career of prolific creation, the same images have appeared in Carrington's art again and again. Ghosts turn into crows, pigs unfurl wings, armchairs produce arms and women grow birds as limbs. No one knows, and Carrington refuses to reveal, where her ideas come from and what she means by them.

Naturally, legions of art historians have tried to work it out. The art collector Edward James, her friend and patron, thought he'd solved it when he said that, "The paintings of Leonora Carrington are not merely painted. They are brewed. They sometimes seem to have materialised in a cauldron at the stroke of midnight."

Wise, mad and contrary, Carrington has lived a life every bit as surreal as her art. This is a woman who wouldn't think twice about serving you an omelette made with your own hair. Sixty-nine years ago, the 23-year-old Carrington, already a notorious avant-garde artist, and the lover of the 46-year-old Max Ernst, escaped from a Spanish lunatic asylum. Terrified of the Nazis and half mad, she hastily married a Mexican poet, got on a boat and fled Europe forever. Since then, she has spent nearly all her time here, in the same three-storey house in a leafy, run-down artists' area of Mexico City. The branches of the tree she planted long ago at the centre of her house, now almost tap on the windows of her old rooftop studio.

Today, her smile is still so bewitching you can see how she mesmerised Max Ernst 70 years ago. Her hair is pinned up in the same way it was on the day of her wedding and – although it is 30 degrees outside – she is dressed in elegant woollens. "I miss England," she says, sipping her Earl Grey tea. "Although I probably just miss the past." When Carrington left England in 1937, Surrealism was considered shocking, and three kings had sat on the throne in the space of a year. "Who have we got now?" asks Carrington. "Elizabeth? She must be quite new."

Carrington was born during George V's reign, to Harold Carrington, a textile tycoon, and Mairi Moorhead, who filled her with Irish folklore. They were social climbers and, much to the young Carrington's disgust, took great delight in having her presented at court. "We were taught to walk like this," says Carrington, walking her slender fingers sideways across the tablecloth. "All I could think about was how much my tiara hurt."

Carrington drew and painted from a very early age. "My parents didn't mind me painting. I suppose they thought it kept me off the streets," she says roguishly. Unfortunately for her parents, the painting they had encouraged became more than just a harmless amusement. When she was just 19, they lost their daughter to it.

While studying art in London, Carrington met Max Ernst at a dinner party. Ernst was 46, on his second marriage, and one of the best known artists in the world. Enthralled, Carrington defied her furious parents and, leaving everything she knew, took off with him. The couple moved to Paris and straight to the heart of the Surrealist circle which included Man Ray, Paul Eluard, Marcel Duchamp, Joan Miró, and was led by André Breton, whom Carrington describes as ' "the headmaster of Surrealism". She remembers: "There weren't many parties, but we used to meet at cafés and discuss everything."

Carrington took advantage of whatever parties there were. She turned up naked to one and painted the soles of her feet with English mustard at another. She famously served guests hair omelettes at a dinner party, using locks she had lopped off their sleeping heads the night before. She never tried to be a Surrealist, but her paintings of fantastical creatures and living furniture happened to encapsulate the essence of the movement. "I didn't think of myself as a Surrealist. I try not to think of myself as anything. We all have these egos, you know," she explains.


The Parisian parties came to an end when Ernst and Carrington were driven out of the city by Ernst's angry wife, Marie-Berthe Aurenche. The lovers eloped to Saint Martin D'Ardeche, a tiny village in the south of France, where Carrington bought a small farmhouse. "Ah, Provence," she says. "I was very happy there. I worked, I painted, I had a vine I looked after."

They led a peaceful life, except for the occasional invasion by Surrealist friends from Paris. Ernst and Carrington painted each other, worked together, and created alter-egos for themselves. Ernst's Loplops and Carrington's Bride of the Wind still occupy the old farmhouse, as huge reliefs that Ernst sculpted against the front wall.

Their creative bliss ended when Ernst was taken to an internment camp by the Nazis. Carrington was left alone for many months, only occasionally being allowed to take paints and brushes to the incarcerated Ernst. Not knowing whether he would live or die, she stopped eating. She drank orange-blossom water to induce vomiting, hoping her sorrow would be alleviated by the spasms.

She was eventually rescued by Parisian friends who were fleeing France in their small Fiat. Carrington sold her house to a neighbour for a few francs, set her pet eagle free, and drove to Madrid. "I had to leave Europe because of Hitler. The Nazis didn't like the Surrealists at all," she says.

She later wrote with unflinching honesty about the corpses she saw on the road to Madrid, about being gang raped by soldiers when she reached the city, and about her escalating madness.

"In the political confusion and the torrid heat, I convinced myself that Madrid was the world's stomach and that I had been chosen for the task of restoring this digestive organ to health," she wrote in her diary. After articulating some of this to police at the British embassy, Carrington was thrown into a mental asylum where she was dosed with the seizure-inducing drug Cardiazol and left for days strapped to a bed, naked and convulsing.

Word of her condition got to England and Carrington's parents ordered her nanny to go – by submarine – to collect her. But she had no intention of going back home. She crept out of a bathroom window and escaped; hailed a taxi, and, in desperation, made a decision which changed the course of her life. "Take me to the Mexican embassy," she ordered.

There she found Renato Leduc, a Mexican poet and friend of Picasso, whom she had met once or twice in Paris. He took pity on her, and they married so that she could get a Mexican visa. They tried out married life together for a year in New York and Mexico City.

"But Renato was impossible to live with," announces Carrington, drawing at her cigarette. "He kept going off for days and not telling me where he was. So I did too, until I met someone else."

That someone else was Emerico Weisz, a Hungarian Jew and press photographer, whom she later married and had two sons with. She also found new artist friends, Remedios Varo and Kati Horna. The three, once described by Frida Kahlo as "those European bitches", became very close, and their children grew up together.

All the while, high up in her studio, she continued to paint. The same creatures she had painted in France, those from fairytales and Irish folklore, continued to appear under her paintbrush, joined by the ghosts, Mayan folklore and pyramids of her new home. Elements of Celtic mythology, Tibetan Buddhism, the Kabbalah and the occult were also thrown into her cauldron.

In the 1950s, Carrington began her only novel, The Hearing Trumpet. This April, she turned the same age as the book's 92-year-old heroine, the bearded and slightly senile Marian Leatherby. Their antics and utterly convincing nonsensical views on life are strangely similar, as if Carrington always knew what she would become. She continues to live half in and half out of the world. "I've lost my sense of time and space," she says, not with displeasure. "Not so much space as time. I remember strange things."

She is always curious about what's going on outside her walls. She reads newspapers and applies her common-nonsense to politics: "It is impossible to understand how millions and millions of people all obey a sickly collection of gentlemen that call themselves 'Government'." She eats out every week, and regularly attends gallery openings, although she is unconvinced by abstract art: "Yeugh. It seems to always be getting bigger. I like small things."

As Carrington helps herself to another biscuit, preparations are under way on the other side of the ocean to heighten her profile. In addition to the Manchester exhibition, Pallant House Gallery in Chichester is preparing for an exhibition next year of work by Carrington, Varo and Horna. She is quite unconcerned by all the fuss. "Why would anyone be interested in me? I'm just an old lady."

Despite possessing one of the world's most potent imaginations, being an inspiration to generations of artists and treasured as the last link to the Surrealist movement, she remains unselfconsciously humble. "Everyone's had an interesting life," she says. "Unless they're interested in business or something."

Credits:  This article was originally published under the title "Nazis, nannies and hair omelettes: Leonora Carrington, the last living Surrealist, looks back on her extraordinary life and times" in a 2009 issue of Independent.  It has been edited slightly for clarity.