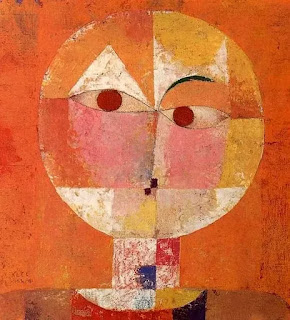 The young reader (almost but not quite sixteen years old) may find Franz Kafka's "The Metamorphosis" difficult:  a bit slow, a lot sad.  Between the slowness and the sadness, words turn sluggish and distractions proliferate.  A page can turn into a series of 12 hour days:  sunrise, sunset, sunrise, sunset.  When not yet sixteen, the long-cycling page drags on the psyche, and the tick of the clock becomes a form of captivity, not to mention claustrophobia.


Being time's prisoner is the aspect of Kafka's writing that links him to Existentialism and Expressionism; both are associated with angst. Angst is to Kafka what blue is to sky.  The twinship of Kafka and angst has cast a stubborn spell, that of youth over the man and the writing.  Kafka, perpetually young, perpetually doe-eyed, perpetually self-obsessed.  This is the Kafka about whom a Castle's worth of books have been written that report on broken engagements, job dissatisfaction (okay, revulsion), and emotional complaints. Details of a life so often repeated they seem to merge effortlessly with the work.  But!  Of course Gregor is Kafka--and so is every other character and creature he wrote about.  For there is no subject other than Kafka in the work of Franz Kafka.  It is a fortress of self with few windows, no doors, and light if it gets in at all remains trapped; angst is nothing if not all consuming.

But, angst has less severe definitions; it is akin to "fret."  The English Oxford Dictionary cites such examples as:  "my hair causes me angst," "... I used to cause my mother major fits of angst while trying to keep me still in church;" "... she put all our cutlery and crockery away in the wrong places, causing much angst upon our return."  These examples are the stuff of comedy, as Kafka knew so well, and tragedy. Whatever disturbs expectations has the power to produce an exaggerated response--and taken to the extreme becomes a mattter of life and death.  Or, slapstick.

Saying "The Metamorphosis" is sad is not saying much, and the reader, despite feeling worn out by the task at hand, is aware that sentimentality leaves much of the story untouched.  Developing an argument requires more effort, more thought.  More work.

And what is "The Metamorphosis" if not the quintessential story about work? Getting out of work that is; the problem being that skipping out on the job is not so easy.  "As Gregor Samsa awoke one morning from uneasy dreams he found himself transformed in his bed into a gigantic insect (trans. Will and Edwin Muir)."  And, "It was no dream."

Clearly, Gregor is not going to work that day.  He reflects a moment on his condition, which he tries to dismiss as "nonsense," before his thoughts turn to his boss (a tyrant), the porter (an agent of the chief), the insurance doctor (another agent), his parents (who live off his earnings).  Gregor is enmeshed in a network the primary function of which is to get as much work out of him as possible, and which he fears and resents.  There is of course the job itself--traveling salesman--described by Gregor in terms of relentless torture.  When the chief clerk arrives to fetch him, Gregor's father tries to fend off any suspicion of malingering.  Gregor, he insists, spends his free time reading timetables and thinking about business.  His single "form of relaxation is working with his fretsaw."  Only illness explains Gregor's lateness.  The chief clerk responds that whether Gregor is ill or not is beside the point; he must work given "business considerations."

The reader has by now finished the story and has decided that work is the cause of Gregor's unwanted and ill-timed transformation; focus is shifted from the over-all sadness the story causes to...

A difficult thesis.  Kafka has managed to alienate most political factions. He is the bow over which  partisans on the left and the right launch criticism, warnings and frustrations   Fascism?  Kafka, for or against?  Socialism?  Zionism? No one really can say for sure, not that people have stopped trying.

And then there is Max Brod--Kafka's friend, editor and promoter--who is often singled out for trying to save Kafka from politics to begin with.  Brod has been regularly accused of misleading the public on--most, well--everything Kafka, beginning with his religious convictions.  Regarding The Trial, Brod observes:  "Only a man who loves life on the deepest foundation writes a tale in such a way."  He goes on to assert that Kafka's stylistic choices represent aesthetic and moral principles; there is no separating the two.  "A ray shines out from every detail, pointing to the eternal, the transcendental, the world of ideas." The description feels so forced (trying to squeeze humor out of Kafka is difficult enough) that one wonders if Brod is talking about another book entirely.  But he is not.

Brod's lofty approach to Kafka has caused much consternation, and yet his view of Kafka was in keeping with the Prague literary circle to which he belonged.  The beautiful, the sublime--and the ideal.  The raison d'être of art, and what is art if not life itself?

By the 1960s, Kafka's reputation as what Adorno describes as the "information bureau of the human condition" had solidified.  Remarkably, 11,000 books and counting have been written on the author, turning Kafka into the very thing he despised:  an industry.  This industry is by and large dedicated to whatevet is sad, shabby and shameful in his writing, with a bit of the absurd thrown in to relieve nervous tension.  Brod, we are continuously warned, is not a reliable source.  But, truth be told, even if Brod's aesthetic idealism is at odds with prevailing opinions about Kafka, it still lives on in certain German-Jewish, English-speaking households--which is perhaps simply another way of saying, Kafka, don't you see?  He is really just one of us.

"Did you turn in your paper?"
"I finished."
"What did your teacher say?"
"He said every year he has one kid who picks Kafka."