Jeanne Moreau, Indestructible And in Demand


"Usually when a woman is 60, it's over,'' says Jeanne Moreau, sipping Evian in her dressing room at the Theatre National de l'Odeon here. ''But now it begins again. During rehearsals I am confronted by things very mysterious. I have terrific fights with inner demons, and it's more painful than it ever was.''

When a great performer's career draws to a close, the film industry usually responds with a tribute, much like the one planned for Miss Moreau this week in Florida at the Sarasota French Film Festival, which begins Tuesday. In the last 40 years, Miss Moreau has made 85 films for directors like Orson Welles, Luis Bunuel, Jean-Luc Godard, Francois Truffaut and Louis Malle. At the inaugural Sarasota Festival, dedicated exclusively to French cinema, Jeanne Moreau will justly take a curtain call. ''She, more than any of the others, was the signal star of the Nouvelle Vague,'' says Molly Haskell, the film critic who is the artistic director of the event.

But Jeanne Moreau is not a weepy, broken-down star. Far from it. At 61, she is riding a new wave of popularity, with a 12-month work schedule that includes four films and two plays. After the festival, she is off to Moscow for the last seven weeks of production of the Soviet film ''Anna Karamazoff,'' directed by Rustam Khamdamov. Then it is back to France, after touring Japan in one of her recent stage hits, then to film ''La Femme Fardee,'' based on a Francoise Sagan novel. And the West Germany director Wim Wenders has cast the actress in ''Until the End of the World,'' an $18 million futuristic love story to be filmed in 12 countries from Australia to Iceland.

Earlier in the year, Miss Moreau for a cameo appearance in the film ''Nikita'' with the French director Luc Besson.

''I work more now,'' says Miss Moreau in her gravelly voice, ''because at this time of my life I am not disturbed from my aim by outside pressures such as family, passionate relationships, dealing with who am I?'' - those complications when one is searching for one's self.'' She pauses. ''I have no doubt who I am.''

Miss Moreau is not one to research roles extensively. She abhors actors who needed to discuss motivation to pick up an ashtray. (''Some actors need to know why. But why not?'') When it comes to film, Miss Moreau uses the preparation of costumes to find her way. ''It's like a trip when you make a film,'' she says. ''You prepare your costume as if you're packing. The intensity comes bit by bit, like a puzzle.'' ''She cooks the characters,'' says Florence Malraux, the daughter of Andre Malraux and an old friend who has worked with Miss Moreau during the production of three films. ''And I don't think she has the same approach every time. 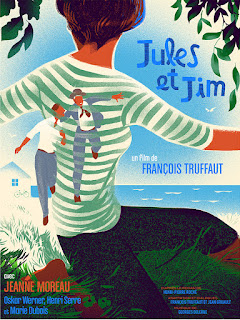 ''She's obsessed with details. In 'Jules and Jim,' we ran out to a department store to buy material for a belt.''

In 1986, Miss Moreau's career found fresh energy when she returned to her theater roots and appeared in ''Le Recit de la Servante Zerline,'' adapted by Hermann Broch from his novel. In this drama, Miss Moreau portrayed a maid recounting the details of her full life, a role that required the actress to command the stage virtually alone for more than two hours. Theater critics from France, Germany and Italy all separately voted her actress of the year in 1987, and Miss Moreau found herself besieged with offers to work. ''Zerline was an enormous beginning in my life,'' she says.

As Miss Moreau flies into Sarasota, she will have just closed another hit on the Paris stage. She played the old, fat matchmaker in ''La Celestine,'' a 15th-century Spanish play by De Fernando de Rojas. Her performance prompted John Peter, a London Times critic, to publicly urge British producers to bring her to the West End.

In the late 1920's, Miss Moreau's French father, a restaurant owner in Montmartre, married an Anglo-Irish woman dancing at the Folies-Bergere. After Jeanne and her younger sister, Michelle, were born, their father lost his restaurant. During the Nazi occupation of Paris, Jeanne's family lived in a hotel above a brasserie managed by her father.

At 15 she saw her first play, Jean Anouilh's ''Antigone,'' and immediately informed her parents she wanted to become an actress. Her father slapped her. But he could not deter her, and Miss Moreau began taking classes at the Conservatoire, the well-known theater school in Paris. ''My father was pretty anti,'' says Michelle Moreau. ''It was my mother who used to secretly help her study.'' It worked. By the age of 20, Jeanne Moreau was the youngest performing member of the Comedie-Francaise.

Miss Moreau was paid some $300 for her first picture (''Last Love'') in 1949, a sum that was quickly devoured in treating herself and friends to dinners of woodcock and bananas flambees. What followed were small parts in 21 easily forgotten Grade-B movies. Her drooping mouth and smoldering looks were not appropriate for a time that favored more conventional beauty. In 1953, however, the star of a Paris stage production, ''L'Heure Eblouissante,'' fell ill, and Miss Moreau was asked to play both lead women roles. The dual characterization of wife and lover awakened Parisians to a phenomenon.

A few years later, her steamy portrayal of Maggie in Peter Brook's staging of ''Cat on a Hot Tin Roof'' reaffirmed her talent among the international cognoscenti. ''A wide experience . . . has put Mademoiselle Moreau in the front rank of the younger generation of the French actresses,'' said a 1957 article in The New York Times.

At the time France was in turmoil. The Fourth Republic was disintegrating, and Gen. Charles de Gaulle was rallying the nation to ratify a new constitution. Young Frenchmen were coming home in boxes from the Algerian War. The French film industry was not immune to the changes in the air, and a group of young film critics working for a periodical called Cahiers du Cinema began turning their hand to film making. They included Francois Truffaut, Jean-Luc Goddard, Claude Chabrol and Eric Rohmer.

The New Wave was born. Its best films between 1958 and 1962 - such as Mr. Goddard's ''Bout de Souffle'' (''Breathless'') (1960) with Jean-Paul Belmondo - were steeped in a critic's knowledge of the classics but were unconventional and rough, as the times dictated. A new style of film, of course, also required new stars, and it was to Jeanne Moreau that one young director - Louis Malle - turned for inspiration. Mr. Malle had previously co-directed an underwater film, ''Le Monde du Silence,'' with the marine expert Jacques-Yves Cousteau.

In ''Frantic'' (1957), Miss Moreau's first film with Mr. Malle, the director did away with flattering lights and makeup and instead allowed the camera to explore the actress's pouting beauty. ''She suggested intimate pleasures to everyone,'' says Ms. Haskell. The style was continued in ''The Lovers'' (1958), in which Miss Moreau's bored, provincial housewife abandons her husband and child for her new lover -a feminist film before the feminist movement.

The crucial scene, a torrid lovemaking that closely explores a woman's reaction during orgasm, scraped through the censors and became an instant international sensation. That year the film won an award at the Venice Film Festival, and Miss Moreau, the thinking man's femme fatale, was born.

A string of critically acclaimed performances followed. Her portrayal of Madame de Merteuil in Roger Vadim's version of ''Les Liaisons Dangereuses'' (1959) was lurid. She created a woman at the point of breakdown from Marguerite Duras's screenplay for ''Moderato Cantabile'' (1960); she was alienated in ''La Notte'' (1960), directed by Michelangelo Antonioni; and a brassy gambler in Jacques Demy's ''Baie des Anges'' (1962). But many critics think that her greatest performance was as Catherine in Truffaut's ''Jules et Jim'' (1961). In the film, Miss Moreau's Catherine is involved in a complicated menage a trois that ends tragically in her suicide and the murder of her lover.

Sometimes, of course, talent alone does not make a star. Publicity does. Miss Moreau was a favorite of the 1960's paparazzi, who hounded her to her 57-acre estate near Saint-Tropez or through hotel lobbies in exotic locations.

Miss Moreau had a son by her first husband, the French actor Jean-Louis Richard. The tabloids, however, were filled with stories about her affairs with Mr. Malle, young actors and the couturier Pierre Cardin. Her reputation was fanned by touchingly frank interviews that seemed to mirror the destructive, passionate women she played on screen.

But her days of stardom in the early 60's, she now says, were racked with jealousies, confusion, searching. Around 1965 it caught up with her. She had just finished several films - ''The Trial,'' directed by Orson Welles and Marcel Ophuls's ''Peau de Banane'' - when Mr. Malle teamed her with Brigitte Bardot for ''Viva Maria.'' Shortly thereafter, Miss Moreau fell into a deep depression. She could not tolerate light. She suffered from insomnia.It was a turning point in her life. ''In 1965, I found the pressure of 'You must do this for me,' 'You must get that amount of money,' 'You mustn't do this one' unbearable,'' she says. ''I couldn't stand it. I was too aware of the system. In fact, it was a very healthy reaction because I cut loose of the star system and began to lead a different life.'' Miss Moreau began an intensive self-analysis. ''Some people are addicts. If they don't act, then they don't exist. I had to check to see if I was an addict. Well, I know now that if something happened, I could make a decision to do something totally different. I can live without acting.'' 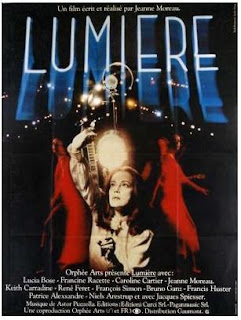 Miss Moreau was never forced to give up acting altogether. But by the early 1970's, the type of film she was acting in had deteriorated. ''Moreau is commonly the only excuse for the films she's in,'' observed one critic. In 1975 her directorial debut (''Lumiere'') was critically praised, and the following year she performed a cameo as the aging, temperamental actress in Elia Kazan's film ''The Last Tycoon.'' Yet the opportunities to work were nothing like those of the heady days of the early 1960's. She sold her beloved Saint-Tropez estate, and a brief marriage to the director William Friedkin ended.

In her latest stage hit, the actress created the bawdy Celestine by means of a few facial scars and petticoats. Somehow the stringy tendons in her neck knotted like a trunk of an olive tree. She did something with her mouth, moving it as if food were caught under wooden dentures. These are the kinds of details that have made her a great actress.

''Part of the excitement is to discover a role by oneself,'' she says, aligning a jar of skin cream against a towel on her dressing room counter. ''Sometimes we have these very special qualities, as though we were psychic. Through a small detail we go directly to the point.''

Credits:  This article was first published in 1981 in The New York Times.