The Unlikely Kinship of “Bambi” and Kafka’s “Metamorphosis” 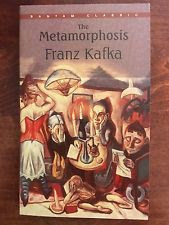 Before there was “Maus,” there were the “Mouse Folk.” Or, more precisely, fifty-six years before Art Spiegelman drew Jews as mice in his family memoir, Franz Kafka played with the associations between Jews and mice in the last story he wrote, “Josephine, the Singer, or the Mouse Folk,” which was published in 1924. The “mouse folk” live with danger and enemies close by, much like the Jews of Central Europe did then. As the brilliant Kafka scholar Heinz Politzer noted, the character of Josephine, with her unique manner of singing, seems to evoke Karl Kraus, the Jewish writer and performer who had, in Kafka’s opinion, a special way with German-Jewish dialect. (“No one can speak Mauscheln like Kraus,” he wrote to a friend.)

But the story is written so that such readings require leaps and stretches, some amount of interpretive acrobatics. (Theodor Adorno once described Kafka’s work as a set of parables, the key to which has been stolen.) In the end, we can’t even be certain that “Josephine” is about animals at all. It’s true that Josephine’s singing, which is really a sort of whistling, doesn’t seem quite human. On the other hand, the narrator, who is one of the mouse folk, speaks like an educated person. How he or she looks goes mostly unaddressed. Perhaps the term mouse in the title is a metaphor.

“You can read Kafka’s animal stories without realizing that they are not about human beings,” Walter Benjamin wrote, adding that, when the recognition suddenly sets in, “you look up in fright and see that you are far away from the continent of man.” What Benjamin described is what people call the Kafkaesque, a quality that abounds in the animal stories, since they are full of another of its key elements—incongruous responses to monstrous events. A man wakes up to find himself transformed into a giant vermin and wonders: How am I going to get to work on time? But if Kafka’s animal studies are a special case, written in a style entirely his own, they also reflect a larger literary phenomenon. From Heinrich Heine, in the early nineteenth century, to the Austrian literatus Felix Salten, on the eve of the Second World War, a number of German-Jewish authors wrote stories with anthropomorphized animals. For the most part, their animal figures evoke the plight of European Jewry without concertedly allegorizing it—though the temptation to read them as allegories is often strong. In his thoughtful and deeply researched new study, “Bestiarium Judaicum: Unnatural Histories of the Jews,” Jay Geller argues that these writers were engaging, critically but mostly in an open-ended way, with a network of associations having to do with the nonhuman animality of Jews. As Geller sees it, the challenge that these writers set for themselves was to activate the power of these associations—to engage the associations from within, by using animal figures themselves—without reinforcing pernicious, and ultimately deadly, stereotypes.

Geller roams imaginatively through German-language literature, identifying the possible antecedents of the animal figures in the works of Heine, Max Brod, and other Jewish writers of the period between about 1800 and 1933, his chronological frame. Some of the writers whose work he analyzes are, like the science-fiction writer Curt Siodmak, not very well known today, but most are either semi-famous—like Salten, the author of “Bambi,” and the satirist Kraus—or outright famous, like Freud and Kafka. Geller catalogues the key animal associations in the German imagination—Jews and pigs, Jews and wolves, Jews and dogs, Jews and apes, Jews and rodents—and discusses their evolution over the centuries, providing commentary on widely circulated instances of these stereotypes, from the bestiaries of the Middle Ages to graphic representations of Jews as animals in Nazi propaganda. He considers how the animalizing of Jews facilitated the Holocaust, looking, as he does so, at reflections on “the construction of the Jew-Animal” by Jews who were in occupied Europe at the time of the Final Solution—Primo Levi, Jiri Weil, Gertrud Kolmar, among others. There is a notable complexity in all this: animals are beloved in German culture. As a saying popular around 1800 had it, the veterinary hospital in Berlin treated dogs like men, while the regular hospital treated men like dogs. And the perception that Jews, with their kosher slaughtering rituals, were cruel to animals was in fact a rallying point among German anti-Semites.

Nonetheless, anti-Semites often likened Jews to animals, as Richard Wagner does in his essay “Jewishness in Music” (1850), which describes Jews as parrots who don’t understand the sounds they reproduce. And the animal figures in Austrian-Jewish literature often embody the pressures and anxieties that beset Central European Jews. Kafka’s story “A Report to an Academy,” which was first published in 1917, in the Zionist magazine The Jew, consists of an ape’s disquisition—at times highly reflective, at times benighted—on his process of assimilation into human society. In Salten’s “Bambi,” the deer characters debate whether humans, who have the guns and the power, will “ever stop persecuting us.” One early reader thought he could detect the rhythms of Jewishy German, or jüdeln, in the patter of rabbits in another of Salten’s animal stories. (For some readers, the phonetic proximity of mauscheln, another word for jüdeln, to the German term for mouse thickened the association between Kafka’s mouse folk and the Jews.) But the use of animals also has a delocalizing effect, making the characters more relatable than they might be if they had a specific human shape or heritage. Certainly, it says something that the vermin in Kafka’s “Metamorphosis” is a strong candidate for the great everyman of Central European literature, and that Salten’s “Bambi” is probably its most successful coming-of-age story.

Anthropomorphized animals lend themselves, famously, to the fable, political and otherwise. Yet Geller rightly insists that the animal stories of Austrian Jews don’t offer straightforward statements of political ideology. He offers a scathing critique of the historian Jens Hanssen and his attempt to read Kafka’s short prose text “Jackals and Arabs,” from 1917, as a negative response to Zionism. There are echoes of Salten’s Zionism in “Bambi,” as I have argued elsewhere, but I wouldn’t call the book—which is more searching, in its sentimental way, than programmatic—a work of Zionist fiction. In this respect, Austrian-Jewish animal stories are in synch with Austrian modernism, which tended to resist ideological commitments—especially after the First World War, as the critic Marjorie Perloff’s argued in last year’s “The Edge of Irony: Modernism in the Shadow of the Habsburg Empire.”

The collapse of the Empire prompted a new wave of thinking about the situation of Central European Jews, many of whom, during the reign of Franz Josef, had belonged to a minority that was aligned with the official culture of a fraying, multinational system. That had been complicated enough—now where were they? Some of the Jewish intellectuals of Central Europe saw their cultural position, and the self-consciousness that resulted from it, as extraordinary and exceptional. In their attempts to evoke this position, they seem to have turned increasingly to nonhuman figures. In a 1921 letter to his friend Max Brod, Kafka offered what is now probably the most famous description of the plight of German-Jewish writers in Central Europe: “With their back legs they stuck fast to the Judaism of their fathers, and with their front legs they found no new ground.” Around the same time, the Viennese Jew Franz Blei published “The Great Bestiary of Modern German Literature,” in which he comically classified many of his contemporaries as exotic animals. The “female Kafka,” for instance, “is a rarely seen, wonderful moon-blue mouse, which eats no meat but subsists on bitter herbs. Its gaze is fascinating, because it has human eyes.”