An audience with Samuel Beckett, from Garry O’Connor’s The Vagabond Lover 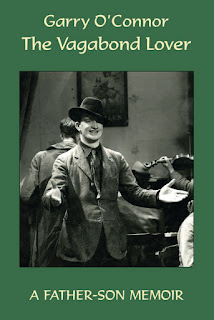 Ian Herbert, another friend from King’s, was working for Pitman’s. He commissioned a book on French theatre. I decided I would try to interview Samuel Beckett, intending a whole chapter just on him. I wrote to ask if I could see him and gave him some dates I could be in Paris. For six months I kept this up and received eight tiny letters scribbled almost illegibly in a right-slanting hand on flimsy tissue paper saying he was never there when I was there.

It must have been rather like God that Harold Hobson interceded on my behalf, for after these very polite but ‘sorry-to-disappoint-you’ evasions, Beckett, in much bolder ink, and with fluctuating pen strokes and stronger legibility, wrote ‘I could meet you for a drink May 28 in the bar of the “Closerie des Lilas”, 171 Bld du Montparnasse. If this suits you do not trouble to confirm.’ I had found the combination to access the inaccessible.

I arrive at the Closerie full of excitement. He was waiting but I had been forewarned, ‘I hope you do not expect me to talk about myself or my work, there’s not a squeak left in me on that sore subject!’ There were two faces of Beckett confronting me over glasses of whisky. One was upright and severe, that of a lean but august figure dressed in baggy clothes, a tweed jacket which had very padded shoulders just like a superior working man from an O’Casey early play. The hands weren’t those of a Dublin labourer, but very long, very fine – aristocratic. He could have been an ascetic Irish priest, even a mystic, a saint – or a pope.

The other face was warm but animated, etiolated and linear like that of a racehorse – again Irish. Its fluidity and mobility reminded me of Jackie McGowran whom I’d seen in Endgame (was I thinking of Lucien Freud’s male faces, which look similar to those of horses?).

He talks very quietly, but he is not at all dry in manner. I had translated some of Céline’s work for the RSC, and hear that the famously denounced collaborator, lauded for his Voyage au bout de la nuit, ‘went to Germany where he sided with Laval, and then to Norway. After the war they left him alone [as they did Maurice Chevalier]. He lived in Boulogne with his wife, and Gallimard [his publisher] tried to screw the most out of him!’

He left London because he couldn’t find a publisher. A certain resentment for publishers and exploiters, or neglecters, of Beckett’s talent, can be detected. Dare one call it paranoiac? He decries the ‘nakedness of his own self-pity’ in the true and steeply paranoid decline of Ionesco in his last plays.

‘What do you think of Jean Genet?’ I ask.

‘Genet?’ he says a second time, with a frown as if I am obscurely trying to confuse him.

‘Jean Genet,’ I repeat so there should be no doubt.

‘Oh, Jean Genet,’ he says at last with a surrendering flicker of recognition.

‘Genet doesn’t want anyone to do his plays anymore.’

He isn’t altogether happy with Genet’s plays. We were edging into personal areas. I don’t push it. I had the sense, in the way between us the time passed, that he likes spending time for its own sake – this is quite mystical – that time for him passes very slowly, in contrast to people who are diffuse, through whose hands time passes quickly.

He talks so quietly that I have to keep asking him a second time, or in silence wait till I feel I can complete his sentence. He looks away frequently, as if he is extremely shy. I leave long silences, which he breaks about fifty-fifty. He will sometimes resume with the same subject.

‘I spent two miserable years in London, in [Chelsea’s] World’s End, in a bedsit for thirty shillings a week. I regretted it…. I don’t want to go back to Ireland, I had lots of relations and children [not his, for he was childless] in Wicklow. Last time I was in Ireland was in 1968 for two weeks.’

The Irish poor mouth! Oh God, not shades of…Marlowe’s, ‘I have run up and down this world with a case of rapiers, wounding myself when I had none to fight withal.’ Marlowe could well have been Irish.

He offers me a cigar, before lighting one. He says that he is worried about his eyes: he’s had two cataract operations which have succeeded, so why does he worry? I haven’t asked personal questions, or about his work, and I can sense this is a relief. Unprompted he starts to tell me in awe that Joyce, his friend and mentor for whom he worked as secretary, spent seventeen years on Finnegans Wake, while ‘even the Sistine Chapel took Michelangelo only four!’ He receives letters from ‘a lunatic asylum’ from Joyce’s daughter, Lucia, to whom, long ago, in the early 1930s, he had become attracted. Joyce’s son Mario is in ‘Germany, married to a rich American; his grandson, Stephen, lives in Paris and works in an office.’ He says his own work is quite paltry and unimportant compared to that of Joyce. Chesterton’s definition of a saint is someone who is always in the presence of one greater than himself, so here the description fits.

We’ve drunk several rounds by now. I have been with him for over an hour and a half so my audience is almost over. He plays obsessively with something from his pocket, rolling it on the table, then with an almost compulsive movement puts it away. His body and movements are tense: of someone who has eliminated most forms of emotion or spiritual despair from his mind, I guess, but not from his physical being, where the tension is still manifest.

It’s not so hard to believe that here is someone who suffered considerable if not continual rejection all his life until Peter Hall’s production of Waiting for Godot at the Arts Theatre came along. But one mustn’t forget he didn’t really like how Peter Hall had made Godot into a burlesque, with hilarious comic routines, drawing out audience laughter he hadn’t intended.

He had written up all those reflexes of being rejected, but fashioned fastidiously and with exquisite workmanship, into literary art. Where from? Was it in the first instance from his middle-class family, in the second by the literary world? He destroys all letters, he tells me. Rejection, resentment, and bitterness can indeed by very funny, and wonderful for actors to explore. […]

When we part he seems regretful of leaving, saying very lightly ‘Enjoy yourself!’ He has a profound twinkle in his eye. I gently tease him with ‘Did you vote in the last election?’ to which he replies,
‘No, no – I don’t do anything like that!’

Dislocation of consciousness is the name of Beckett’s game, life through a lens giving it distinctive distortions. It reminds me of some work done by Johnny my brother: curious, anamorphic paintings of intricate detail which require a glass cylinder to be placed on top to reveal the full image. Given that Beckett destroys all letters, I can’t understand why he is so keen to have my address which he asks for.

I won’t forget the eight tiny missives. The first few were tentative, spidery, evasive in the handwriting, almost unreadable. As he decided to see me they grew bolder and stronger in pressure and use of ink on the flimsy paper until he splashed out an assent. Beckett was master of forging a merciless no out of a longing for yes, showing a world constantly on the edge of disintegration.
Jean-Paul Sartre – much less likeable but an interesting playwright – had one answer to why Beckett was so popular. He dismissed ‘the solitude, the despair, the commonplaces of non-communication’ as being ‘profoundly and essentially bourgeois’. He scorned Godot, ‘by far Beckett’s best play’ for being ‘pessimistic, expressionist’, yet he pointed out that it was ‘the kind of thing which appeals to the middle class’. […]

I fail to understand the quasi-religious obeisance to those increasingly hermetic late plays, which are hallowed like relics, variations of focus on a vanishing point of faith, hope, and love, playing the game of hunt the thimble, man’s reduced soul. The endgames of Beckett and Pinter would have us believe that Nature has forgotten us and is no more.

hamm Nature has forgotten us.
clov There’s no more nature.

Garry O’Connor has worked as daily theatre critic for the Financial Times, and as a director for the RSC, before he became a fulltime writer. As novelist, biographer and playwright Garry has published many books on actors, literary figures, religious and political leaders, including Pope John Paul II and the Blairs. He has had plays performed at Edinburgh, Oxford, Ipswich, London and on Radio 4, and contributed dramatised documentaries to Radio 3, scripts and interviews for BBC 1, as well as having his work adapted for a three-part mini-series. The Vagabond Lover, his father-son memoir, is an incisive probe into the life and career of his father, Cavan O’Connor, famous as a popular tenor and active throughout most of the twentieth century, and into his own life and career as a writer. It is published by CentreHouse Press, and is available at https://www.amazon.com/dp/1902086155/