The museum dedicated to Argentina’s foremost painter, Xul Solar (1887–1963), evokes a cabinet of curiosities befitting the eccentricities of this talented artist and polymath. Besides his paintings, often whimsical and occultist, Xul Solar invented a language he called neo-criollo that he hoped would replace Spanish and Portuguese in Latin America; he concocted an elaborate chess game and a new deck of Tarot cards; and he built a three-keyboard piano that linked musical notes to colors. All these creations are on display at the museum that occupies his former home and studio.

The Museo Xul Solar is in the upper-middle class Palermo district of Buenos Aires, on a quiet street of multi-story dwellings mostly from the second half of the 20th century. The museum was inaugurated in 1993 after a thoroughly contemporary redesign. But its façade dates back to the early part of the century and preserves its lengthy wooden window shutters and balconies with wrought-iron railing that were typical of the French-Spanish hybrid architecture of the period.

Inside, I’m greeted by several watercolors from the early 1950s of half-human, half-animal faces of zodiac figures that remind me of characters created by Maurice Sendak 40 years later. At the suggestion of my guide, Teresa Tedin Uriburu, the museum’s communication director, we view the 84-work collection in chronological order. But first, she offers a brief summary of Xul Solar’s early years. 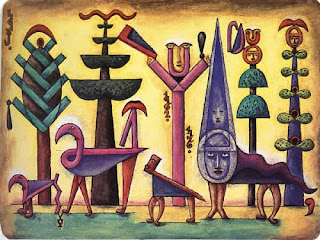 He was born Oscar Schulz Solari on December 14, 1887, in the small town of San Fernando, now a northwest suburb of Buenos Aires. His mother, a housewife, was Italian, and his father, an immigrant from Estonia, worked in an Argentine penitentiary giving technical job training to the inmates. Their son studied architecture, painting and classical music, but never received a degree. In 1912, he set off for Europe on what would prove to be a dozen-year sojourn in France, Italy and Germany during World War I and the bitter peace that followed.

In Paris during wartime, he socialized with Picasso and other cubists and in Italy with futurists. But Xul Solar’s early postwar years in Germany proved to have the most lasting influence. He was spellbound by the German Expressionist group, Der Blaue Reiter, especially works from this period by Paul Klee. Like the Swiss-born artist, Xul Solar often included deceptively child-like figures along with letters, numbers and other symbols in his paintings.

The first room at the museum contains art works, many of them watercolors on cardboard, that Xul Solar painted during his time in Europe. A repeated motif is reincarnation. His 1915 El Entierro (The Burial) depicts a funeral procession in which the fetus-shaped soul of the deceased levitates and returns to a womb-like cave.

Many of his works contain snakes, representing forbidden knowledge. The sun appears frequently in his paintings, as might be expected from the artist’s assumed name. Humor is another element in Xul Solar’s repertoire. The 1922 watercolor Las Cuatro is a playful jab at Cubism—four cartoon-like faces, with eyes attached to nose and an orifice for the mouth, glance in different directions. Ña Diáfana (Lady Diaphanous, in the neo-criollo language invented by the artist) is a 1923 semi-abstract watercolor in the style of Klee. The woman, her organs exposed, grasps a serpent that encircles her.

In 1924, Xul Solar moved back to Argentina with a missionary zeal to shake up its sleepy art scene. He joined the Martín Fierro movement. Linked to an eponymous short-lived magazine (1924-27), the movement was named after a rebellious mythical gaucho and called for cultural change in a country still heavily influenced by formalistic 19th century European notions of art and literature. Martín Fierro members included Jorge Luís Borges, the phantasmagorical novelist, who became a close friend of Xul Solar.

Perhaps the most important Xul Solar work to come out of his involvement with the movement was the 1927 pencil and watercolor, Drago (neo-criollo for Dragon). It depicts a powerful, united Latin America transformed into a giant serpent swimming across the ocean to rescue a Europe impoverished by World War I. In the reptile’s wake are the flags of the former colonial powers—Spain and Portugal—as well as the Stars and Stripes of the neo-colonial pretender. But Drago was one of the few overtly political works among Xul Solar’s varied creations. More typical of the same period is the 1925 San Dansa (neo-criollo for Saint Dances), writhing stick-like figures that invite comparison to Keith Haring’s paintings from 60 years later.

By the 1930s, the Martín Fierro movement was a dim memory. Xul Solar’s works took on an increasingly narrative and mystic quality. In the 1936 Vuel Villa (Flying Village in neo-criollo), clumsy ships carrying exotic residences and other buildings are lifted by balloons high above an earthbound village of more conventional homes. Another notable work, Santos y Guardianes (Saints and Guardians, 1942), depicts holy men of Western and Eastern faiths climbing heavenwards on shaky columns and ladders.

Some of Xul Solar’s largest paintings are from the 1940s and ’50s. He became enthralled by the links between art and music. In the 1948 Barreras Melódicas, peaks and valleys represent high and low musical notes. And he returns to the theme with a similar landscape in Cinco Melodías (1959). In between, he created his famed three-keyboard piano, which is on display on the museum’s mezzanine.

Above the mezzanine, up a winding staircase, are the modest living quarters of Xul Solar and his wife, Lita Cadenas. The apartment opens into a library of 3,000 volumes, arranged eccentrically by size rather than subject; in a corner is a wood-and-wire skeleton fashioned by the artist. This was the room where Xul Solar and Borges met frequently for hours to discuss art, literature and astrology, and to play pan-ajedrez, an expanded chess game in which each opponent had 30 pieces that not only moved across the board, but also bore alphabet letters to be shaped into words.

Earning little income from art, Xul Solar made a living as a translator of books in English, French, German and Italian, and by renting out two apartments in his Buenos Aires residence. In his last decade, he spent much of his time in Tigre, the isle-dotted delta of the River Plate a few miles north of Buenos Aires. And in the years after his death in 1963, he became an almost forgotten figure.

There was a brief spike in interest in Xul Solar when the Buenos Aires Museum of Latin American Art, known as MALBA, staged a retrospective of 130 of his art works in 2005. The exhibition traveled to São Paulo and to Houston. But Xul Solar remains largely ignored even in Argentina. His museum has tried since 2010 to fund and publish a catalogue raisonnée of his works, but the project isn’t yet nearing completion.

Perhaps his friend Borges phrased the lack of interest most poignantly when he wrote a dozen years after the artist’s death: “Xul Solar’s utopias failed, but that failure is ours, not his. We have not known how to deserve them.”

Credits:  This article originally appeared in Arts and Antiques.
at March 12, 2018