Where Do Words Come From? 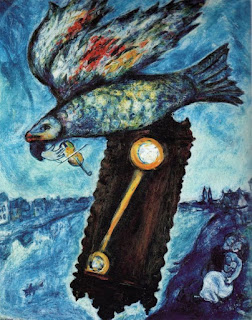 The language of speech, writing, and thought sometimes reflect in a simple way, as in the latest astronomical discoveries of the "brown dwarves" (dark stars that constitute a large share of the universe), the strong power of absent language.  That is to say, what permits and yet impedes the acquisition of what the expatriate finds most difficult to access:  internal residence.

On June 11, 1938, Freud wrote to the Swiss psychoanalyst Raymond de Saussure that emigrants suffer most from the loss of the language in which they lived and though, which is irreplaceable.  Freud took refuge not in German or English, but in a dead tongue, Latin, to define the irreversible: FINIS AUSTRIAE, two words that came to summarize the drama of emigration from one circle of hell to another.

Transterrado:  landless, expatriated, in asylum, exiled, distanced, absent, colonized, in flight, because almost always, at the beginning, emigration is a swallow, a river overflowering its banks, without accounting for the missing pieces that go beyond the surface.  Missing pieces that spring up in the first unspoken evocation.  Eclipses that reappear in dreams that we quickly wipe away.

Many  travelers take on the painful process of translation, to decant, to transfer one human landscape to another.  Above all to build a bridge.  Each person will establish with what means he or she has available, with flimsy ropes or with sophisticated works of engineering, to carry appropriate words across successfully, words that reveal the inner landscape, that since childhood traces with its peculiar tastes and bitterness the common denominator of that other shore, a transaction that is no doubt complicated by memory's lapses and falsified accounts.  But almost always the transmutation has occurred by the time one suffers through the ravages of winter, both internal and external.

Exiles and refugees are stripped of their characteristics and all that is left to them sometimes for self-defense is to shield themselves with armor, a callus against otherness made of clumsy or painful irony and sometimes to wound those that they consider barbarians.  That is to say, they begin to translate.

But what is translation and exile if not taking a random block of words, a planetary system of old ideas, phonemes, and illusions and transporting them into a new and unknown planetary system.  Frequently the orbits are disrupted and many words and laws, generally the most important ones, the deepest and most secret are left floating like enert particles out of orbit.  Translation and exile are always synonyms of loss.

To come from one language and write in another, sometimes thinking in a third and living in whichever one you can, has become a large part of the literary experience of the contemporary novel.

The answers vary, and the rules, sometimes pushed to their limists, establish excessive ties to things far away and the filigrees of nostalgia are revealed in the undercurrent of hatred and resentment.  Finnegans Wake would be in this sense the great text of exile, but there are other alliances and negotiations that are almost as dramatic with language:  Primo Levi, Kundera, Condrad, Singer, Nabokov, Kosinski, Beckett, Gombrowicz, Kafka, Cortázar. Or for example closer to mine:  Dujovne, Bianciotti.  The relation of the country of origin where you no longer live emerges from the mere listing of their names, the dense jungle that exile has produced.

Each author in some way, in his or her own way, is a kind of traveling library, an atlas, which refers to and sends us back to the libraries where the unwritten and uncharted multiply endlessly.

We all participate in this great leap of communication, negotiating sometimes in an extreme way with language because the inalienable weapon in the hands of the exile is sarcasm.  Irony is capable of absorbing hatred and pity without poisoning its user too much.  Out of this dispossession the world may become a chaos inhabited only by barbarians.

As I translate my theme of exile as it traverses and grows, almost like a Bermuda Triangle, translation being a synonym of marginalization and remainder, an image sticks in my mind: a detail from a painting by Bacon.  From a chaotic circle of green lines emerges a massive tree, uprooted, defenseless.  Without anesthesia.  Like a wisdom tooth.  Roots lying on the earth, disproportionate to the hapless trunk.  I foresee that from there will be some sprouts while others will perish.  Over this shape there is a glow, something like a yellow point clearly tracing a path.  Perhaps a man's head.  An easel perhaps.  The title of Bacon's painting announces:  Portrait of Van Gogh.

Credits:  This essay was originally published in 2002 in the anthology Voice-Overs: Translation and Latin American Literature (Daniel Balderston and Marcy E. Schwartz, Editors).