Poet of the Underworld 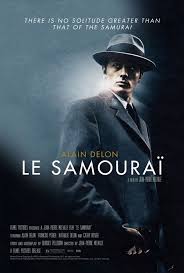 Jean-Pierre Melville said it himself: "I have a bloody awful character." In 1972, towards the end of his career, glowering at the world through smoked glasses under a Texan ten-gallon hat, the man whom some consider to be the "father of the nouvelle vague" listed the collaborators for whom he still felt gratitude after 25 years in the business. None of his stars stars got a mention; neither Belmondo, Delon, Lino Ventura nor François Perrier. Nor, outrageously, did his his great director of photography, Henri Decaë. Melville told the journalist Rui Nogueira, author of The Cinema According to Jean-Pierre Melville (1996) that he only felt gratitude to Pierre Charron and René Albouze. Charron chose the furniture for his films; Albouze was a prop man.

This is as good a clue as any to the character of this provocative, morose, secretive, private and perverse man, whose life was a running battle with collaborators, former admirers and critics. He once said he was "a solitary to the power of five - myself, my wife and three cats."

It was of course this sacré caractère which drove Melville to employ the independent methods of a "new wave" director well before the nouvelle vague. Melville made his first feature in 1947; the nouvelle vague proper did not appear until 1959. Frustrated by the film establishment, which regarded him as an amateur, and angered by what he saw as the "communist dictatorship" of the unions, he built his own Studio Jenner, in 1947, the only director to have one. It was destroyed by fire in 1967.

His first film, an adaptation of "Le Silence de la Mer by "Vercors" (pseudonym of Jean Bruller, a celebrated Resistance hero) was shot in Vercors's own home. It is the story of a German officer billeted with a French family who maintain a total silence throughout his cultured monologues. It was one of three Occupation stories Melville filmed.

Melville then had a quarrelsome relationship with Jean Cocteau making "Les Enfants Terribles" (1950), Cocteau's tale of covert incest, before getting to the film which gave him real nouvelle vague credentials, Bob le Flambeur (1955). Bob starred Roger Duchesne as a compulsive gambler who, in that stalwart cliche, plans a final heist intended to guarantee a comfortable retirement. He tries to clean out the Deauville casino, but in an ironic twist wins a fortune legally while his raid is in progress.

It was not the plot but the freshess of treatment which distinguished this work. Shooting on the streets of Pigalle, in the clubs and bars of pimps and lowlifes, Melville brought style and humanity to this grotty territory. But he wasn't starry-eyed about gangsters. He expressed this in a rather nicely chosen phrase: "The underworld is as rotten as the bourgeois world." Not that Melville was a lefty. A former member of the Gaullist resistance during the war, one of his problems for the Cahiers critics who first revered and then loathed him, was that politically he was unacceptably rightwing.


Melville has both a contradictory and complementary relationship with the philosophy behind the nouvelle vague. American cinema was its inspiration and when working as critics, Godard, Truffaut, Rohmer, Rivette, et al, were intolerant of the French approach to film-making. But when it came to making their own films they turned out work that was quintessentially French. Someone had to be left minding the store. Melville was the man. He became France's "American" director, noted for the lengths to which he went to model his gangster output on American classics.

The gangster's office in "Le Doulos" (The Finger Man), made in 1961, is an exact copy of the office in Mamoulian's City Streets (1931), reconstructed from an old photo in a film magazine. Melville liked to plant American two-piece phones in French cabaret scenes, and preferred Anglo-Saxon sash windows to the French shuttered variety. Even his name was borrowed from America - from Herman Melville. His real surname was Grumbach. Curiously, although he was a most notable producer of garlic gangsters he disapproved of Sergio Leone's spaghetti westerns. "They killed the western," he complained.

But Melville was certainly not acting in isolation. France already had its ersatz American thrillers, notably the creaky "Lemmy Caution" 1950s secret agent series featuring Eddie Constantine, France's tame American tough guy. Before the war, Jean Gabin holed up in Algiers in "Pépé le Moko" and in an attic room in "Le Jour se Lève." Jules Dassin, American-born but exiled to Europe, made the Paris-set heist movie Rififi in 1955. And, as London's French Institute demonstrates with a parallel season of French films noirs, when the nouvelle vague actually got going, Truffaut offered an adaption of David Goodis's downbeat novel, Shoot the Pianist, and Louis Malle affected noir stylistics in Lift to the Scaffold (1958).


But Melville's films at least had a personal style which soon went beyond simple imitation. It reached its most iconic resolution in 1967 with "Le Samourai." Following a quarrel - routine for Melville - he had to swap Belmondo for Alain Delon, and dress the pretty boy up in Melville's regulation trench coat and snap-brimmed hat. He would break out the gangster uniforms twice more, in "Le Cercle Rouge" (1970), and his last film, "Un Flic" (1972).

Melville's hardboiled world is really that of the film buff, but a skilled one. He involved himself in every aspect of film-making; set design, writing the script, running the camera, and designing his heroes' fetching gangster gear. Here we come to a puzzling contradiction. Alongside his seemingly obsessive gangster pastiches, Melville was perfectly capable of producing work that was restrained, precise and sensitive with no reaching for decorative symbolism.

A mid-period work, "Léon Morin, Priest" (1961) was the best example, notable for the risky but successful casting of Jean-Paul Belmondo (the vagabond charmer of A Bout de Souffle) as a priest. It is essentially a two hander with Belmondo, priest in a small town in occupied France, and a young communist (Emmanuelle Riva). He converts her to Catholicism, to which she submits with expectations of an erotic reward on earth rather than any gratification in heaven. There was plenty of scope for pretentiousness here but Melville made a perfectly straightforward, intelligent and quite moving film. "L'Armée des Ombres" (The Army in the Shadows) a Resistance story taken from a Joseph Kessel novel, was also thoroughly straightforward and effective.

Melville's films have not had a smooth ride critically. Ginette Vincendeau, professor of film studies at the University of Warwick, is the author of the first major study of Melville in English: Melville: An American in Paris. She sums up Melville's rollercoaster career. "In the 1950s, after Bob the Gambler, he was appreciated by Cahiers du Cinema. That changed dramatically in the late 1960s when he became an object of their hatred. The critical agenda had become very politicised. They thought Melville was rightwing and therefore abandonded him aesthetically. He himself said: 'I live like a rightwing person.'


"This was the point when Melville was making films that were very beautiful cinematographically. They saw him as Americanised and they were very anti-American in the 60s. But at the same time the quality press was still very pro-Melville. Also he turned against the 'new wave'. He became a member of the French censorship commission and he was against subsidies, having himself started purely independently. He was also an extremely provocative person. But what is often overlooked is that he became a hugely successful director. 'The Red Circle' (1970) had four million spectators in France, which is huge."

"The change," she continues, "dates from 1996 when the Cahiers du Cinéma had a change of heart - for the second time - and devoted an entire issue to Melville." Quentin Tarantino joined in the praise, naming "Le Samourai" and "Le Doulos" in his 1995 selection of favourites for a programme of screenings at the National Film Theatre in London. Recently John Woo, the Hong Kong director claimed he wanted to do a remake of "The Red Circle."

Melville died in 1973 of a heart attack while having lunch with the French journalist, Philippe Labro. The story goes that his father and grandfather both died of heart attacks aged 55 and that Melville approached that same age with increasing apprehension. So how old was he? You guessed it - he was 55.