TLY: We are delighted to have award-winning writer Kim Adrian with us today. Kim has published fiction and non-fiction, and she is the author of Sock (Bloomsbury, 2017) and The Twenty-Seventh Letter of the Alphabet (U of Nebraska, Sept. 2018). She graduated from Barnard College with a degree in cultural anthropology. She holds a M.F.A. in literature and creative writing from Bennington College. Kim lives in the Boston area with her family.

Kim is also the editor of The Shell Game (U of Nebraska, April 2019), an anthology of essays that makes use of borrowed forms.

Again, Kim, thank you for speaking with us. We here at TLY are always interested in trips and experiences away from home. When did you first leave home?

KIM: I was sixteen when my parents sent me to France for the summer to live with a host family in Cadillac as part of a language-learning program. I spent six weeks there. Every day was quietly mind-blowing. In a weird way, France seemed more real to me than America. Maybe this was just the novelty factor, but I think it also had something to do with the way culture is so deeply rooted there. In ordinary, everyday contexts, you can see history stretching back for hundreds of years. It’s in the architecture, in the layout of the streets, in the food, it’s in everything. That trip opened my eyes and gave me new perspectives, just as they always say travel does. I remain a devoted Francophile.

TLY: Do you find yourself gravitating to certain cities? Regions?

KIM: As an adult I’ve lived in New York, San Francisco, and Boston. I sometimes wonder if I would have lived in other places if I hadn’t been with my husband from such an early age (we started living together when I was eighteen). The places I like aren’t always the same ones that pull him. But if all the logistics could be magically settled, and my husband were on board, I’d move to Sweden today. I’ve always been drawn to the Scandinavian countries, in part because my grandfather was Swedish, on my mother’s side, and so was my great-grandmother, on my father’s side. So Swedish is the biggest slice of my mutt pie chart.

TLY: What inspired you to major in cultural anthropology?

KIM: My husband, James. As I just mentioned, we got together when we were very young. He was at Columbia. I was at Barnard. I was kind of a lost puppy—I’d just come out of a crazy home life, with alcoholism, violence, drug addiction, psychological abuse. I had no bearings to speak of and hardly any boundaries. James was (and remains) very smart, very kind, very centered. I listened to him about practically everything. One great piece of advice he gave me back then was to take Introduction to Cultural Anthropology with a wonderful professor named Robert Murphy. That class was like France had been: totally mind-expanding. One day Murphy said that there are two kinds of anthropologists, two kinds of people: those that see and emphasize the differences between people and cultures, and those that see and emphasize the similarities. I immediately understood that I was in the latter camp. Murphy was great like that. He helped me understand that I couldn’t possibly hope to understand another culture—or anything at all—without also studying my own mind, my own cultural and intellectual biases. After that class, I was hooked.

TLY: In an interview, you said: “I love working in the essay form because of the way it allows for lateral movement of thought—a kind of wandering. Yet, at the center of every good essay is a still point, and there stands the essayist—or, rather, the essayist’s sensibility.” Would you share with us some more of your thoughts on the relation between the essay form and the writer's sensibility?

KIM: One of the reasons the essay appeals to me is that it can be both extremely personal—actually intimate—but at the same time almost clinical in its engagement with facts. The personal part of the equation has to do with the writer’s sensibility. The facts are largely what that sensibility engages with. More than any other prose form, the essay uses the author’s sensibility to shape and energize the work. It’s similar to poetry in this sense. A big part of what’s going on with both forms is simply a presentation of the writer’s mind at work. Part of the thrill of a good essay (as with a good poem) lies in watching that mind make connections between unexpected, sometimes wildly incongruent thoughts, images, feelings, and facts. This is how we all respond to the world around us, mentally and emotionally, but both the poem and the essay make it their business to track that process in an especially lucid way. Sometimes when I’m working on a complex piece, I feel like there’s something actually physical going on inside my head. It’s almost acrobatic: sensibility grappling with subject. So yes, in one sense, the writer’s sensibility is a still point, because it’s located inside the writer—but it’s also extremely dynamic.

TLY: In the lovely work, “I Wish I Could Write Like Russell Edson,” you finish in part with the following: “… I wish I could write the way Harpo Marx talked.” Can you describe Harpo’s manner of speaking and why it appeals to you?

KIM: Well, as you know, Harpo doesn’t talk at all. And yet he communicates more perfectly, with more subtlety and beauty than either of his brothers (and they’re pretty great communicators!). I guess what I meant by that line—what I meant by the whole piece—is that I wish I could write better, more clearly, more honestly, and in that way better reflect the complexities of the world around me. I suppose I also was talking about how language always falls a little short. It can only point at things. Never be them. Harpo got that, and bypassed it. I think that accounts for his Buddha-clown appeal.

TLY: You write with great passion about craft. What is the role, if any, of politics in craft-oriented work?

KIM: Ooh—good question! This is something I think about a lot, though I’ve never settled on a very clear answer. I’d say first of all that all work is craft-oriented in the sense that craft is required to create a finished piece of writing. But if you’re paying some kind of extra-special attention to craft, if, for instance, you’re looking very closely at the relationship of form to content, or rejecting conventional forms in favor of something more idiosyncratic or experimental, your work tends to bring craft to the forefront, where people notice it more readily. There’s an assumption that conventional work—work steeped in American Realism, for instance, or any of its offshoots—is less crafted, but this isn’t the case. It’s just harder to see, because realist modes of literature are so ingrained and so popular. Yet even conventional forms take tremendous efforts on the craft front. I know because I’ve tried to do them and I can’t. As much as I’ve wanted, in the past, to write more conventionally, at the same time something in me resists writing this way. It makes me feel very ill at ease. Not to sound dramatic, but it can make me feel physically sick. Yet for ages I bought into the idea that the conventionally structured novel, and the conventionally structured short story, and the conventionally structured memoir, et cetera, were all somehow natural formations: the right way to write. It took me years to accept that I’m simply not wired that way -- that the things I want to write about simply don’t fit into those forms. It’s strange it took me so long because the work I love most is almost always more formally inventive. Now, I understand realism to be a mirage. A materialist fantasy. A very seductive one, sometimes a very comforting one, but it’s important to recognize that it’s limited. I think it’s also important to recognize that conventional forms can only hold certain kinds of stories—stories that fit comfortably into that specific kind of container, stories that can accommodate those particular restrictions. But there are a lot of other stories out there that don’t fit those restrictions. And if you don’t struggle to find the right way to tell them—if you don’t work your ass off crafting something different—they just won’t get told. So yes, I think there really is a political element embedded in form—both conventional and unconventional forms.

TLY: Apart from writing, what is your favorite mode of expression?

KIM: Hm. Probably cooking. I love baking especially. I’ve always baked a lot—cookies, pies, cakes, bread. There was even a time in my twenties when I trained to be a professional baker, but I quickly realized I was happier as a home baker, which is a completely different animal. But actually I like to cook everything—not just baked goods. It’s creative and sensuous, but it’s also a way of expressing love, not only for those you cook for, but also for the ingredients. I’ve been practicing yoga for 20 years, daily for the last ten or so, and along the way I’ve studied a bit of Ayurveda, yoga’s “sister science.” One of Ayurveda’s basic tenants is that food should be prepared with great care, ideally with love, because when we eat we are not only imbibing nutrients and calories, we’re also taking in energy—the energy with which the food was grown, raised, harvested, and prepared. This principle holds true for everything, actually, because energy is in everything, is transferred through everything. I think that’s important to think about, as a writer.

TLY: Kim, we can’t thank you enough for the interview. Your work is something to be treasured. Before you go, would you mind telling us about any projects on which you are currently working?

KIM: Thank you! It’s been fun. And thank you for your kind words about my work. Right now I’m working on novel about the German Romantic writer E.T.A. Hoffmann. It’s a fictional biography, but of course it plays with form a little more than that.

More About the Author 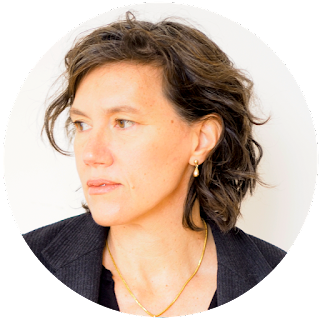 Kim Adrian is the author of the forthcoming memoir The Twenty-Seventh Letter of the Alphabet (University of Nebraska Press, October 2018) and Sock, part of Bloomsbury’s Object Lessons series. She the editor of The Shell Game: Writers Play with Borrowed Forms. Her award-winning stories and essays have appeared in O Magazine, Tin House, Agni, the Gettysburg Review, Brevity, and many other places. She has taught at Boston and Brown Universities.

She may be found at the following sites: 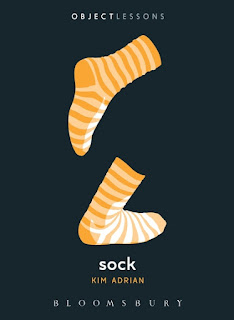 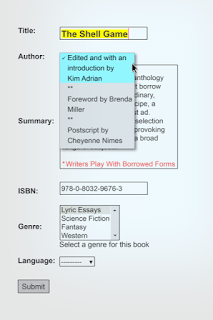 For purchase The Shell Game: Writers Play with Borrowed Forms
at March 16, 2018