The Rise of the COVFEFE (two excerpts)

How do thugs rise to power? Is it fate
That breaks fame’s mold and shapes it to their cause?
Some fuckery in the stars, some destined date
(Of bullying) that brings them to applause?
Throws crowns on heads, gives thrones to jabber-jaws
With no experience, who thumbed their way
Into the spotlight with a bad toupee?

With Biff, specifically, the path was smooth
As blackjack-velvet, an obsessive pride,
That said, “Before you’re too long in the tooth,
Why not try President?” And so, he tried
And found the road much easier than implied:
Since making promises to ‘conquer evil’
Was just like taking bets from desperate people.

And now King Biff waves blinged-out sparkling scepters
At fresh apprentices, much like himself,
Who have no clue how they became directors
Of something uge, whose shelf-life has no shelf--
That ‘something’ being a country. Like a wolf
In sheep’s apparel, Biff stays playing his part,
Smiling and smiling (with a gambler’s art)

As he undoes all that was done before,
Erasing legacies that aren’t his own;
Increasing funds for fossil-fuels and war,
Decreasing hopes, like Pennywise the clown,
Whose sewery hideouts crippled a whole town
With widespread fear, hysteria, and a longing
To live elsewhere, know peace again, belonging.

With every bill Biff holds up to the cameras
With extra face-paint caked to his smug cheeks,
Each deal he makes (on whims) in silk pajamas
While scarfing caviar down, Tex-Mex with leeks;
And with each dime he’s swindling from the sheiks
Who bought his oil, it’s becoming clearer
That Biff would run his circus like a furor.

A big-top tough-guy, an elitist bully,
A spoon-fed big-head, arrogantly shiesty,
A white-supremacist without the hoody,
A pitbull in a suit, but not as feisty,
(Words fish-egg lucid, see-through as a nighty),
Biff thanks the hate-crossed stars that birthed his reign
That a white man’s in the White House once again.

And as old statues topple, lose their power,
Their racist grace, their ‘yee-haw!’ moonshine rapture,
Their unsheathed-saber pride, their bronze-glow glower,
Their slave-days shine, their hero-status stature,
Pissed Biff insists such symbols are the plaster
That’s kept our world together for so long,
And Tweets the link to some confederate song

Now long forgotten in our history’s annuls,
And thinks about his wall and how to build it;
Heats up a TV-dinner, changes channels,
Receives a text from Dence, which says, “You killed it!”
Imagines himself stripping at the pulpit,
Being cheered (like Caesar) for his giant cock,
Mount Rushmore, with a new face in its rock.

Whose streets are these? Covfefe’s fucking streets!
Covfefe’s TV-slots! Covfefe’s news!
Covfefe’s goons, in all the highest seats!
Covfefe’s drugs! Covfefe’s pints of booze!
Covfefe’s weapons! meant for you to use
In crowded clubs, bars, high-schools, churches, temples,
Mosques, shops and homes, to Drake’s lame instrumentals!

And Biff can have the White House if he wants,
We put his ass in office anyway!
The big O too, and all of history’s stunts
Who longed for fame! All narcissists, who’d say
They cared about this great land where you stay:
Knowing full well they only sought a name,
And, from their fellow countrymen, acclaim.

This last election was predictable,
Since we programmed the votes in our machines
With “Biff” “Biff” “Biff”; one token-vote for Hill,
To make it look like one of freedom’s queens
Might win the prize of Prezzy, which all scenes
(Of politics) project as something sacred,
When we all know that enterprise is naked.

A ruse of pomp and circumstance and power,
Made for the public’s eyes with careful skill,
So that the great illusion doesn’t sour
But saves face with its reputable chill
Of jet-plane fly-bys, fireworks, shows of steel
That America’s so casually accepted,
When any pawn of ours becomes elected.


Who cares if you grope women? hang with racists?
Debase the challenged? challenge popes to duels?
With nuclear-threats, trade barbs with well-known fascists?
Can’t spell at all, unless the word is ‘fools’?
What difference does it make if you’ve made tools
Part of your entourage, best known for failure,
Whose egos puff more smoke than an inhaler?

Or spread hate-talk, like margarine over bread,
Until the people turn on one another?
Welsh, like a chump, on everything you’ve said,
As though no proof exists of what you utter
On live TV? reps leaking what you mutter
Behind the scenes, about your shit-hole’s cant,
Since any dipshit can be president!

That’s if we want you ruining that office
With your ideas, scatterbrained or brilliant,
Pumping up crowds with talk of racial justice
And words like ‘country,’ ‘brotherhood,’ ‘resilient,’
‘Terrific,’ ‘great,’ ‘uge,’ ‘biggly,’ ‘traitor,’ ‘vagrant,’
(‘Foreign-invaders,’ ‘losers,’ ‘rapists,’ ‘wetback’),
Boosting our stocks or giving them a setback.

Since we decide what flies or doesn’t fly,
Who rules, lives, dies, gets passes, twenty years,
Becomes a leader nobody would try,
Or a douche who caters to your deepest fears.
It’s all strategic! Right down to the queers
That the Biffster’s banning from the army now,
Extra offensive, in your face, like Wow!

The trampled tombs, graffitied, pissed on, shattered
By new-fame seekers, terrorists on the news
(Their stories being told, as if they mattered
More than the victims’ lives they chose to use
As stepping-stones, or the families they bruise
For life, with actions that define destruction)
With phone-recorded scenes of cop-corruption,

Keep stirring the pot, until it boils over
Into explosive acts of riotous violence,
Bring tensions to a head, make murder kosher,
The youth act out of passion with no guidance!
Set towns on fire, flags; bring screaming sirens
With those pigs of ours we’ve given the green-light
To make you statelings disappear from sight 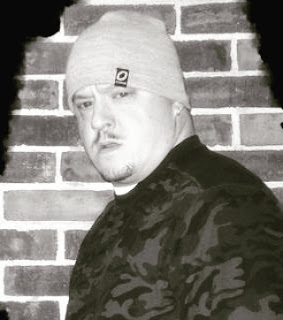 James Feichthaler’s poetry has appeared in print and online journals in both the US and UK. His poems are truthful odes to his imagination, which he calls, “the lunatic disciple of his existence.” The self-proclaimed “forrealist poet” is the host of an open-mic reading series called “The Dead Bards of Philadelphia,” which is held once a month at the Venice Island Performing Arts Center in Manayunk, PA. You can follow James’s poetic exploits on Twitter at @forrealist_poet and keep up with The Dead Bards of Philadelphia on Facebook.
at January 17, 2018