Book of the Times

IN his last novel, “Slapstick” (1976), Kurt Vonnegut told us that he believed in the Bill of Rights, Robert's Rules of Order and the principles of Alcoholics Anonymous. In his new novel, “Jailbird” — his best, in my opinion, since “Mother Night” (1961) and “Cat's Cradle” (1963) — he adds another sacred document. It is the Sermon on the Mount. 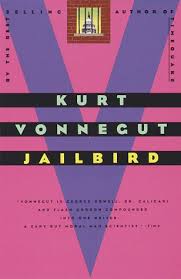 Walter F. Starbuck is asked by Richard M. Nixon at a Congressional hearing in 1949 why, “as the son of immigrants who have been treated so well by Americans, as a man who had been treated like a son and been sent to Harvard by an American capitalist,” he had been so ungrateful to the American economic system as to join the Communist Party. Starbuck replies: “Why? The Sermon on the Mount, sir.”

Harvard and Mr. Nixon, the Holocaust and Watergate, Sacco and Vanzetti, Alger Hiss and Whittaker Chambers, trade unionism and conglomerate capitalism, not to mention Roy M. Cohn — these are the obsessions of “Jailbird,” a fable of evil and inadvertence. Strong stuff, Starbuck would say, because strong stuff is the latest in a long line of Vonnegut semaphores, verbal kiss‐offs: so it goes, hum, I had to laugh, small world, strong stuff.

What has this stuff to do with Starbuck or the Sermon on the Mount? Starbuck is the son of a millionaire's chauffeur. Because he plays chess with the millionaire, the millionaire sends him to Harvard, where he has an affair with a radical young Irishwoman and joins the Communist Party. He is off, then, to join Roosevelt's New Deal. He quits the party on the occasion of the Nazi-Stalin pact. In Germany during and after World War II he meets and marries a death‐camp survivor and has dealings at Nuremberg.

He returns to Washington to betray, by accident, a friend. Years of joblessness follow until Mr. Nixon makes him his special adviser on “youth affairs.” Some of the Watergate money is stashed in his windowless office, and so he goes to jail with the big boys. Let out in 1977, he arrives in New York and falls into the clutches of a conglomerate that seems to own most of the world.

Starbuck is clearly one of those characters to whom history is always happening like an accident. His old girlfriend tells him: “You can't help it but you were born without a heart. At least you tried to believe what the people with hearts believed — so you were a good man just the same.” As good as most of us, anyway, and soon to be back in jail.

Not once in “Jailbird” does Mr. Mr. Vonnegut nod off, go vague. His people bite into their lives. Kindnesses, as inexplicable as history, are collected, like saving remnants. New York, with catacombs under Grand Central Terminal and harps on top of the Chrysler Building, is wonderfully evoked. The prose has sinew. Mr. Nixon's “unhappy little smile,” for instance “looked to me like a rosebud that had just been smashed by a hammer.” Or: “There was a withered old man . . . hunched over his food, hiding it with his arms. Sarah whispered that he ate as though his meal were a royal flush.”

And when you think about it, the Sermon on the Mount is a radical document, promising that the meek shall inherit the earth. Shall they, indeed? Mr. Vonnegut has his doubts. It is the fashion these days for young academics, fresh from bravely grappling with the archetypes of modernism at a graduate seminar, to dismiss Mr. Vonnegut as simplistic. He is insufficiently obscure; he is not loud enough about the ambiguities. Well, as he would say, listen. The simple— courtesy and decency—is hardest.

In “The Sirens of Titan,” the problem was how to cause “less rather than more pain,” how to “love whoever is around to be loved.” The message in “Mother Night” was “We are what we pretend to be, so we must be careful about what we pretend to be.” “God Bless You, Mr. Rosewater” asked, “How to love people who have no use?” Laurel and Hardy were admired in “Slapstick” because, although they were not “really very good at life,” at least they “never failed to bargain in good faith with their destinies.”

To be sure, his characters are given to dreaming of an escape hatch out of history, a secret village, a tropical island, a neutral zone, an alternative reality. But he doesn't let them get away with it. Everything isn't beautiful, and many things hurt, and neither technology nor organized religion is much help, nor “granfalloons” like the Communist Party and the Daughters of the American Revolution. Even play, as in “Cat's Cradle,” can be monstrous, and art itself is a lie. Billy Pilgrim in “Slaughterhouse‐Five” overhears Eliot Rosewater say to his psychiatrist, “I think you guys are going to have to come up with a lot of wonderful new lies, or people just aren't going to want to go on living.”

Simple? Mr. Vonnegut brought all his characters along for Billy Pilgrim's ride in “Slaughterhouse.” In “Breakfast of Champions,” he cut them loose, set them free. One returns in “Jailbird,” a man who writes science fiction novels under the name of, naturally, Kilgore Trout, who is in jail, naturally, for treason. These days, the Sermon on the Mount is treason. Mr. Vonnegut has exactly what Constant pined for in “Sirens”: “a single message that was sufficiently dignified and important to merit his carrying it between two points.” We read his novels the way that Mary Kathleen reads Starbuck's college books: “the way a young cannibal might eat the hearts of brave old enemies. Their magic would become hers.” Ours.