The Spy who Liked to Stay Out in the Cold


From such an unpromising start, he has nonetheless written an excellent literary biography about one of the truly outstanding writers of our time — a man described frequently as a travel writer but who defies categorisation.

Norman Lewis's 14 novels have been likened to those by Graham Greene and his non-fiction shows him to have been a great reporter and a contemporary historian.

Evans was Lewis's friend and publisher, and he has diligently gathered a wealth of material from family papers and interviews with Lewis's childhood sweetheart, his third wife, his six children and many others.

Born in 1908, Lewis was clever, though badly bullied at school. At one point, he was sent away to live with his Welsh aunts, an episode he describes vividly in his memoir, Jackdaw Cake.

His parents were eccentric almost to the doors of the asylum. After losing three of her four young sons, his mother turned to spiritualism. His father — a gloomy Welsh alcoholic — considered their home in Enfield, Middlesex, a foreign country.

Gwen Nicholls, who grew up with Norman Lewis and who stoutly resisted his persistent attempts on her virtue, remembers 'the Arab of Enfield', a 14-year-old boy who was determined to set himself apart.

Lewis was outraged when Gwen decided to marry someone else and, though uninvited, he attended her wedding so that he could interrupt the service at the appropriate moment. Gwen admitted to finding this 'incredibly flattering'.

To teach Gwen a lesson, Lewis married Ernestina Corvaja, an enigmatic Sicilian beauty whose father, banished from Mussolini's Italy after committing a serious crime, became an admired figure in Norman's life for 'his implacable loyalty and sense of fatalistic irony'.

Lewis was attracted to the Corvaja family because of their openness of mind, and lack of religious belief, class consciousness and national pride.

All this was contrasted strongly with Enfield and an England that was beginning to give him asthma. Lewis started out as a small businessman with a specialist camera shop in Holborn, central London.

The business did well and he raced his own Bugattis — but he was bored and he started to travel with Ernestina. Once he stepped abroad, the asthma disappeared.

The embarrassment of Norman Lewis's childhood shaped a personality that was extremely wary. He once said that he was the only person he knew who could enter a room, sum up the situation and leave it without anyone knowing he had been there — a helpful attribute for someone who worked as a part-time British spy.

In the modern world of literary festivals and me-and-myfamous-life promotions, Lewis would have been a publisher's nightmare. In fact, he was pretty much a publisher's nightmare anyway, twice abandoning his career as a novelist, refusing to be categorised as a travel writer and capable of passing an entire business lunch in silence.

There was nothing to be done with Norman except publish him — and insist on the exceptional quality of his work.

Despite early critical acclaim, this was not the way forward and in the Seventies Lewis said he had given up going into bookshops because he became so depressed when he saw that his titles were never in stock.

He turned to journalism and wrote a famous article in The Sunday Times Magazine about the genocide of the Brazilian Indians. This piece led to the creation of Survival International.

Working with Colin Jones and Don McCullin, he contributed a celebrated series of foreign reports from around the world, frequently battling American foreign policy.

Evans includes a wonderful account of a farcical trip Norman made to Peru in search of the Senderos Luminosos guerillas.

Unfortunately, McCullin had been replaced by Lord Snowdon, who tried to treat Norman as his valet, while insisting on 'No publicity'.

Norman said it was the worst trip he had ever made and opened his account of his misadventures by asking: 'Have you ever heard of a man called Lord Snowdon?' During 1982, Lewis was reinvented by the energetic young publisher John Hatt who reprinted A Dragon Apparent, Lewis's account of Indo-China during France's war with the Viet Minh.

Hatt followed this with four other titles, including Naples '44 — which American writer Martha Gellhorn chose as her best travel book of all time. 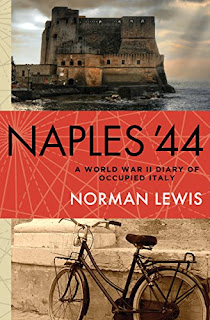 Lewis had gathered the material in his wartime capacity as a field intelligence officer. Much of the information came from the office wastepaper basket.

Semi-Invisible Man is a sensitive and perceptive record of a very difficult subject and deserves every success. Evans deals with Lewis's three marriages fairly, and is scrupulous about confessing when he has no information.

Many of Lewis's titles are back in print, but two of the best of his early novels, The Day Of The Fox and The Volcanoes Above Us, currently await a publisher.

Norman Lewis died in 2003 aged 94, cared for by his third wife, Lesley. Shortly before he 'made himself scarce' for the last time, he called out for 'Monty' — the beloved older brother he had lost when he just seven.

Credits:  This article has been published here with slight changes for clarity.  The review originally appeared in Mail Online (June 2008).
at December 15, 2017