If I Prefer Plants

It’s their indeterminate growth I envy. Ivy writ
large and lush as mint; to fashion nakedness,
some few molecules of pigment, unselfconsciously
turning earth and sun and us into themselves.

Everything of theirs can dehisce. Is this the kernel?
Whereas, cut off a bat’s wing, or a human thumb,
and watch the troubled brain—panicking to see
a way back to normalcy; a scheme of reattachment.

For the old enchantment, in a word, a word again
of envy. Did you know envy’s etymology
just means to look askance?
Steady and unsteady as the elements and parasites,

ready and unready as the funneled end of paradise,
is it sleep or reverie?
Is it even grammatical, my green-eyed
flattery; our glamour of Byzantium, thinking

our world could be named or numbered?
Languorous or overworked, either way
a plant is both. Pick one; note the sparing blood,
the sap close-kept, while we run in place and plead,

foolishly in lines, for a counter to ourselves;
for a good that can be sold; for a short

This summer in this part of Florida it’s as if the
rain is seeking revenge. It’s as if there’s too
much water in the sky. Too much melted water.

Apparently the first word I tried to speak was
to water, which I pointed at and cooed.

I remain a water lover, a pluviophile, but water
is a danger to cross. A dangerous lover to cross.
And if we try to wed her? That’s to make the
verbal ancestor and archetype of water (*wed)
convenient as a person.

I say her meaning him, as needs be. Otter skirts
around. Abound is water on the inside. And
redundant goes back to water’s wet, as well. I
was surprised, too, at the number of hydrous
heads in wed!

And that winter is the wetter season, in
temperate, deciduous locales. Flake on thatch,
or hail on wooden beam, or finally shingles.
Literally the weight of water wherever there’s
time, and a sun in retreat, and no great depth of
convection.

Not here in a hell-hot sauna. Not here where
the water is seeping in, higher and higher up
the belt. Not here where the rain isn’t glazy,
isn’t gauzy, isn’t glaucous. Here where blurry
vision reigns.

Misgivings Whatever They Are

There’s a dew at sunset, too,
if it’s rained and there’s a juniper

to hold the drops, a juniper
with its fingerlings that fade

into the vaguely citrus light
so that the stars appear

and already in these beads,
cast and holding

their constellation
of water almost whole.

Broken in, or still unbroken,
is it a choice to keep

glistening, after the gloss
has shattered

every rest and reset;
every easy, ending answer?

The sound suspended,
we’re looked into,

and through, if we allow,
as the objects of light

release it
(just as tears form

so these so many suns,
light and heavy years

are right here, held out,
as if on limbs? 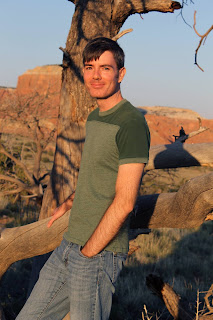 Christopher Phelps lives in south Florida where he works as a math tutor and freelance editor. He received degrees in physics and philosophy, disciplines that discreetly inform his work, but Dickinson and the dictionary were his first loves. His poems have appeared in Boston Review, Colorado Review, Field, The Kenyon Review, and Poetry Northwest. More information can be found at http://www.christopher-phelps.com/details
at October 27, 2017