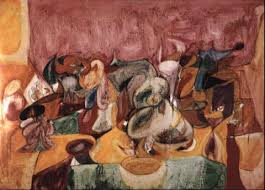 Our soul split apart at birth, and we behaved
most mischievously: You were a man and I was a woman.
When our eyes met, our hearts galloped in the forest.
We encountered matrimony on the outskirts of civilizations.
We were anointed for each other at the turn of the century.
We stood to staring at the Universe.
I heard your whispers on the winds.
We climbed into each other’s minds.
The light of dawn eloped with us.
I heard a whippoorwill in the evening sun.
You took my hand in the Sunday rain.
When I was sad, you took me to the avenue of love declarations.
When you were sad, I took you to the concert hall on Apricot Avenue.
We never lied to each other, and we always organized an evolution.
The status-quo wanted to lunch with us, and
we hid in the sun and ocean.
I was mesmerized by your roller coaster embrace.
You were allowed to have my dress.
We were children in the East Coast.
We were a phenomenon in the West.
I struggled to take my bra off,
as though I were a sinner.
But you were always an angel with an engine under your hood.
Make no mistake about it:
This story should end with a period,
but it doesn’t because it will go on forever…