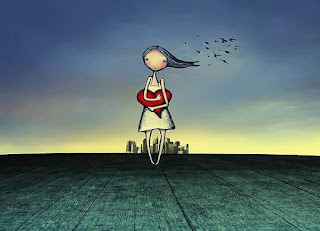 
About three or four months before I left for Brasil, I began dating a guy I met through Himerus. She hung out with him because he was a stoner. Himerus smoked a lot of weed and so did he.  Weed aside, he must have found the attention flattering. She certainly made quite the impression: fiery, everything about her, lit up with color, from her scarlet hair to her scarlet toenails, not to mention a collection of halter tops that celebrated the startling largesse of her breasts. That was Himerus, a goddess in the best and worst ways: beauty, passion, temper-temper.

Himerus liked to steal things.  Young girls, in particular--although not me, particularly. Thirteen wasn't too young. She stole Julie, my best friend.

Until, Julie's parents divorced, and she began spending weekends at her father's house.  Himerus took her absence personally, as if Julie had abandoned her, and only wished to cause her pain.  I knew she was angry with Julie because she started having me over to her house--where I discovered a pool, a stereo, a steady supply of diet soda, and parents that never seemed to be home.

Not that my parents were home either.  They were often gone but Himerus and I lived on different cultural planets.  Where I lived, everyone sang opera, played classical music, painted in oils, and recited poetry before bedtime. My parents called our planet: Kulture.  On Himerus's planet, people were free to live the middle--class American way.  A wonderful place, sort of like 4th of July every day, right down to the potato salad and deviled eggs. And, there was Himerus, the red-headed goddess. She detested rules, listened to rock n' roll, always sunbathed topless, drove around in her little orange car, and engaged in casual sex.  By the time she made me her friend, Himerus was at the height of her powers.

Two years later, I would board a plane bound for Sao Paolo, Brasil.  Himerus told me she would miss me.  I believed her, and the feeling was somewhat mutual.  We were never great friends. She was never someone with whom I could feel at ease.  She yelled, a lot. She cried, too.  Getting high seemed to be the only thing that calmed her down.  When I told her about my plans to spend a year in Brasil as an exchange student, I did so with trepidation.  Who knew what would set her off? She surprised me. Himerus said she couldn't be happier for me.

As for my boyfriend, it was hard to leave. He came with me to the airport.  I remember him crying as we said good-bye at the gate. Himerus was there too.  She was smiling, waving.  She promised to write.  He promised to wait for me.  I was the love of his life.

A month or so after my departure, my boyfriend wrote me.  It was the first I had heard from him.  I had written numerous letters. Letters brimming over with homesickness.  Home was so far away! I felt utterly alone, no matter how much my host family did to cheer me up.  It wasn't the food, the climate, the people:  it was the language.  When one is young and has never left their speck called home, being unable to communicate is debilitating.  I was in a debilitated state when my boyfriend finally wrote.  He began by explaining that he did love me.  He really meant it when he said he would wait for me.  What he hadn't mentioned was that he was also in love with Himerus.  He had to break it to me: He and Himerus were married.  The letter ended with him saying that I should let him go.  Forever.

If you look up the word "homesick" in the Portuguese dictionary, you may find "saudade." They call it the untranslatable word.  It was also one of the first words I learned in Brasil. Perhaps, it came up because I seemed sad, quiet--lost in some painful reverie.  It wasn't necessarily a bad thing, either. There was a certain beauty to what happened to me. Saudade.

A long time has passed since I left home for Brasil.  Recently, I came across a lyric:  Você, que poderia ser tanta coisa, preferiu ser saudade.  It doesn't translate easily, this phrase, and yet it expresses with perfect clarity what I felt back then:  You, who could be so much, preferred to be homesickness.

By now, readers who pass this way may wonder how this story began.

I was sitting in class listening to a fellow student talk about her year abroad.  Paris, to be precise. She'd spent a year in Paris as an exchange student.  A lovely year in every way, as she described the experience.  She lived with a French family, and it had been great. She went to school, and it had been great.  She learned French, and her French was great. By the time she finished her presentation, it was decided:  I too would go to Paris.

Back then, before the Internet, you didn't hear much about Brasil where I grew up.  Honestly, I had no idea where I was going.  But, I was going, and it was then that I learned the true meaning of "no turning back."

Kathryn A. Kopple works in Spanish and English. She has published original poetry and prose in numerous publications, including The Threepenny Review, The Bellevue Review and The Shell Game (anthology, U of Nebraska Press). She is the author of Little Velásquez and The Leaving Year (Mirth Press, 2017).