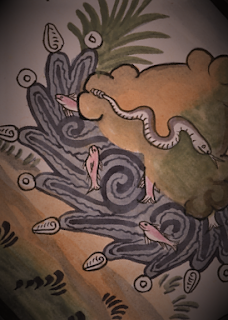 Post number three and I still haven't left home.  I've been stalling, ducking the departure gate, mired in prologue. I keep meaning to leave but instead find myself returning to the place I grew up.  The river I feel still runs through me.  The lap of tilled lands circled by mountains. Ponds and marshes. My childhood haunting grounds. We moved there after my parents migrated from Manhattan to Schenectady to Ibiza, Spain to I forget to Castle Hill Road.

I was about five when we moved to Castle Hill. Ours was a small house perched above a pond surrounded by brushwoods. That pond was legend, mostly because of the water moccasins. Semi-aquatic, six feet long, venomous. Water moccasin was my first "snake" word--well before python or anaconda. Why it is called a "moccasin" and not, "Terrifying water viper," remains a mystery.  According to word detective Evan Morris, "moccasin" was adopted by European settlers from the Algonquin Indians. Moccasin ("slipper" to the Europeans) must have seemed an apt name for a creature that slips easily and noiselessly in and out of water. The pond at Castle Hill was full of them.

The pond was also home to snapping turtles.  They trudged up the hill to lay eggs in our backyard.  In fact, the pond was home to most things with jaws that bite, claws that snatch--together with stinging insects, poison ivy, leeches, black widows.

My parents warned me away from the pond.  "You'll drown.  A water moccasin bite can kill." They warned me away until they gave up and let me do what I wanted.  Feral child, that I was. The snakes never troubled with me.  Poison ivy was the real danger, and I managed to get it in my eyes, down my throat--every inconvenient place.  I spent a lot of time swathed in Calamine lotion and looking like a sorry flamingo.

By now, readers who pass this way have no doubt forgotten how this story began.

I was sitting in class listening to a fellow student talk about her year abroad.  Paris, to be precise.  She'd spent a year in Paris as an exchange student.  A lovely year in every way, as she described the experience.  She lived with a French family, and it had been great.  She went to school, and it had been great.  She learned French, and her French was great. By the time she finished her presentation, it was decided:  I too would go to Paris.

Back then, before the Internet, you didn't hear much about Brasil where I grew up.  Honestly, I had no idea where I was going.  But, I was going, and it was then that I learned the true meaning of "no turning back."

Kathryn A. Kopple works in Spanish and English. She translates for TED in their outsourcing program. She has published original poetry and prose in numerous publications, including The Threepenny Review, The Bellevue Review and The Shell Game (anthology, U of Nebraska Press). She is the author of Little Velásquez (Mirth Press), a novel set in 15th century Spain.