There are no Great Men: A Review of Leo Tolstoy's War and Peace


Famously, Henry James detested historical novels. At best, he regarded them as derivative.  At worst, he thought them cheap.  The historical novel appropriates materials from sources far removed from first-hand experience. The historical novel works not with character, which is for James the novel’s true subject, but types. The authors of historical novels never know when to quit and instead produce cumbersome narratives better used as doorstops. He spared no one his withering appraisal of historical fiction. Leo Tolstoy—to whom the word genius is ascribed with such regularity it begins to feel as if it were part of his name (the Genius Leo Tolstoy)—did not escape James’ cudgel. For James, Tolstoy was guilty on all charges. He also committed one other unpardonable error. He allowed himself as a writer to be constrained by a concern peculiar to historical novels: fidelity to his sources. Historical realism, for James, is the enemy of artistic freedom.

This is not a mere quarrel over two different approaches to literature. Tolstoy is a writer who does not allow himself the luxury of imagining that freedom exists in an essentially un-free society. Individuals may enjoy greater or lesser privileges, but privilege is not freedom. On the contrary, privilege is exhibit A in demonstrating the extent to which individuals are not the masters of their own existence. In his major works—War and Peace and Anna Karenina—Tolstoy does not deviate from his worldview. Even the most influential men—those who appear to wield absolute power over the fate of nations—are not free. In War and Peace, Tolstoy takes it upon himself to demonstrate how no-one escapes this rule, not even legendary figures such as Napoleon Bonaparte. 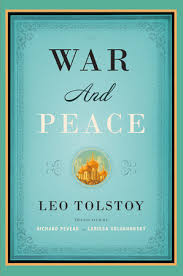 In the 19th century, Napoleon Bonaparte survived the maelstrom that followed the aftermath of the French Revolution, seized power, and declared himself the emancipator of his country—and then of Europe. Of course, he had his enemies. But, he had far more supporters. The conclusion drawn by historians goes something like this: Napoleon was a great hero. He did what great heroes do: change history. He could do all this because he was exceptional, and only the most exceptional persons know what to do with power. Use it. Tolstoy understood how such conclusions could be arrived at: unchecked power is freedom at its absolute limit. But, Tolstoy would have none of it. He understood freedom defined in terms of absolute power as abhorrent, as well as false. He thought it the baldest lie.

Napoleon had been dead less than a decade when Count Lev Nikolayevich Tolstoy was born in 1828. By the time Tolstoy publishes War and Peace (1869), he was an aristocrat in his mid-thirties, married, who had put behind him, by all accounts, a colorful and checkered youth. He had fought in both the Chechen and Crimean wars. His writings about his war experiences, together with other works, earned Tolstoy the reputation of being one of Russia’s most gifted writers.

It is in War and Peace that Tolstoy offers up a portrait of Napolean that is contrary to the legend of the great man. For Tolstoy, there are no great men. And not simply because great men, like all humans, have flaws, but because historians are either enthralled or duped by the very idea of greatness. When Tolstoy attacks Napoleon, he does not do so out of a particular disdain for the man (although, certainly Tolstoy had no love for him). He seeks to exorcise the spirit of Romanticism that deifies people to the detriment of all rational thought.

But, there is a long process of initiation before readers of War and Peace can appreciate the extent to which Tolstoy struggled with the concept of freedom. The author lived during times of reform and repression. Serfdom had not yet been ended but there were attempts, not to mention significant setbacks, to reform. Reformists from the upper-classes fought for greater liberty and were put down by the Tsar. Traditional institutions—marriage, for example—were riven by hypocrisy and void of virtues. And then there was the Church, with its self-proclaimed power over heaven and earth, which instilled superstition in the masses while doing very little to improve the conditions of poor. Everywhere Tolstoy looked, people were punished for thinking for themselves. War and Peace addresses this dilemma on a scale that can only be described as epic.

Tolstoy is such a good writer at creating convincing characters and story lines—extraordinarily good—that it can be tempting to become irritated with his habit of inserting exposition where the reader expects the narrative to chug along on its tracks, as if prose were a well-oiled machine. And important authors have criticized him for his digressions, sermonizing, and belief system. There is a temptation to skip the boring parts of War and Peace, as they say, and get on with the story. But, at a price. War and Peace takes the reader through the military campaigns beginning with the Battle of Austerlitz in 1805 and eventually France’s invasion of Russia in 1812. The war ends with the French army’s retreat after the Battle of Borodino, where according to sources 70,000 or more lives are lost. The French had arrived in Moscow to chaos—much of the city was in flames. The exposition makes it possible for the reader to understand why the beautiful city had to be destroyed in the most objective manner possible. For this task, Tolstoy settles on a detailed description of a dying beehive—and it is but one example of how the author asks us to consider the true complexities of historical events, so much so that the instigator of Moscow's destruction can never be named.