Osvaldo Ferrari: Many people still ask whether Borges believes in God, because at times they feel he does and at times that he doesn’t.

Jorge Luis Borges: If God means something in us that strives for good, yes. If he’s thought of as an individual being, then no, I don’t believe. I believe in an ethical proposition, perhaps not in the universe but in each one of us. And if I could I would add, like Blake, an aesthetic and an intellectual proposition but with reference to individuals again. I’m not sure it would apply to the universe. I remember Tennyson’s line: “Nature red in tooth and claw.” He wrote that because so many people talked about a gentle Nature.

Ferrari: What you have just said confirms my impression that your possible conflict about belief or disbelief in God has to do with the possibility that God may be just or unjust.

Borges: Well, I think that it’s enough to glance at the universe to note that justice certainly does not rule. I recall a line from Almafuerte: “With delicate art, I spread a caress on every reptile, I did not think justice was necessary when pain rules everywhere.” In another line, he says, “All I ask is justice / but better to ask for nothing.” Already to ask for justice is to ask for much, too much.

Ferrari: Yet, you also recognize in the world the existence of happiness—in a library, perhaps, but other kinds of happiness too.

Borges: That, yes, of course. I would say that happiness can be momentary but that it also happens frequently, it can happen, for instance, even in our dialogue. 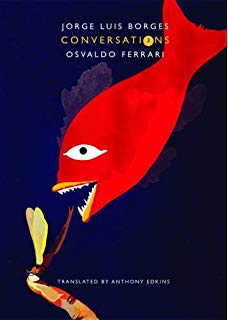 Borges: There’s another significant impact—the impact that prompts most poets to hold on to the notion of another world, a world apart from this one. Because there’s always something in the poet’s words that seems to send us beyond what is mentioned in the writing.Borges: At times I feel, how can I put it? Mysteriously grateful. When I have an idea that will later, sadly, become a story or a poem, I have a sensation of receiving something. But I do not know if that “something” is given to me by something or someone or if it bursts out on its own. Yeats held a doctrine of a great memory and thought that it wasn’t important for a poet to have many experiences because he inherited memory from his parents, his grandparents, his great-grandparents. This multiplies itself in geometric progression until he inherits humankind’s memory and this “something” is revealed to him. Now, De Quincey thought that memory is perfect, that is, I have in myself everything that I have felt, everything that I have thought since childhood. But there must be an adequate stimulus to find this memory. He thought—he was a Christian—that would be the book used in the Final Judgment, the book of everyone’s memories. And that could lead us eventually to Heaven or Hell. But, deep down, that mythology is alien to me.

Ferrari: How odd, Borges, it seems that we are talking constantly through memory. Sometimes, our conversations remind me of a dialogue between two memories.

Borges: In fact, that’s what it is. If we are something, we are our past, aren’t we? Our past is not what can be recorded in a biography or in the newspapers. Our past is our memory. That memory can be hidden or inaccurate—it doesn’t matter. It’s there, isn’t it? It can be a lie but that lie becomes part of our memory, part of us.

Ferrari: As we have talked about faith or its absence, I want to mention something about our times that seems strange to me. Over the centuries, men in the Protestant and Catholic West have worried about the dilemma of the soul’s salvation. But it seems to me that recent generations do not think that it is even a dilemma.

Borges: That seems pretty serious to me, that a person or people do not possess an ethical instinct or sense, doesn’t it? Moreover, there’s a tendency, or a habit, of judging an act by its consequences. Now that seems immoral to me, because when you act you know if your acts are evil or good. As for the consequences of an act—they ramify and multiply and perhaps balance out in the end. I do not know, for example, if the consequences of the discovery of America have been good or evil, because there are so many. Even as we are talking, they are growing and multiplying. Thus, to judge an act by its consequences is absurd. But people tend to do this. For example, a contest or a war is judged according to failure or success and not according to whether it’s ethically justified. As for the consequences, as I said, they multiply in such a way that, perhaps in time, they balance out and then become unbalanced again. It is a continuous process.

Borges: People now only think about whether something is advantageous. They think as if the future doesn’t exist, or as if there is no future other than an immediate one. They act according to what counts in that moment.

Ferrari: And that way of being, of being preoccupied with immediacy, has turned us into “immediate” beings, perhaps even into futile ones.

Credits:  This interview appears under the title Borges and God: in The New York Review of Books.