HIS MOTHER AND HER MURDERER

Fifty years ago, in March 1939, the city of Madrid, capital of republican Spain, surrendered to Generalissimo Francisco Franco, and his complete victory in Spain soon followed. The pain still lingers, especially for Ramon Sender Barayon. It was this pain that sent him on a quest to find the truth about his mother, Amparo, who died when he was but a toddler, and also to find her murderer. ''A Death in Zamora'' is like Nicholas Gage's memorable ''Eleni.'' Mr. Gage's mother was murdered by a Communist firing squad during the civil war in Greece; Amparo Barayon was murdered by a fascist executioner in 1936 during the Spanish Civil War - the extreme right and the extreme left joined in efforts to murder the decent and the sane, each for its particular ''good cause.'' 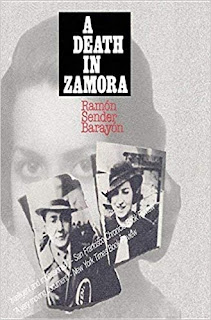 Mr. Sender Barayon was raised in New York State by Julia Davis, a generous writer, after his father had brought him and his younger sister, Andrea, to this country in 1939. For many years he and Andrea, who was a baby when their mother died, kept asking their father about what had happened to their mother. Their father, Ramon J. Sender, the great Spanish novelist, for reasons unknown, perhaps wanting to spare his children the tragic details, always responded evasively.

Ramon Sender had only one peer among Spanish writers of the 20th century, the Basque novelist Pio Baroja. Sender was given almost every literary prize his compatriots had to offer, even those awarded during Franco's brutal dictatorship, though Sender refused to return to Spain during that reign. He did, however, return when Franco lay on his deathbed, and he was greeted by enthusiastic crowds and hailed in headlines. He also received death threats from both the far left and the far right, and bodyguards were needed to protect him. What better measure of a man's worth?

Sender had been sympathetic to revolutionary anarcho-syndicalism, and became friendly with the Communists shortly before and early in the civil war. Then, confronted by the murderous power moves of the Communists, he became stubbornly and outspokenly anti-Communist from a pro-working class point of view, and remained so the rest of his life. He died in January 1982 in San Diego, leaving two sons by two different mothers, a daughter, several women who loved him and 80 works in print, among which is at least one masterpiece, ''Seven Red Sundays,'' a story about a revolutionary uprising in Madrid. This magnificent novel, now out of print in this country, would do honor to any publisher who reissued it.

In July 1936, Sender and his wife, along with their two small children, were on vacation in San Rafael with some of Sender's relatives. Hearing of the nationalist uprising against the young democratic republic, Sender and several other people left San Rafael, walking over the mountains to join the militia fighting against the mutinous army. Before leaving, he told his wife to destroy any papers he had brought with him and to take the children to Zamora, her native town.

It turned out to be a tragic blunder. (Was it guilt for this blunder that later muted Sender's tongue about these events?) It reminds one of the similar mistake made at the time by Spain's great poet Federico Garcia Lorca, who was in Madrid when the war broke out and decided to return to Granada, his native city, where he would be among family and friends. What could happen to him there? The same thing that happened to Amparo Barayon, who was murdered in a cemetery where there was no place to hide from trigger-happy Falangist killers except in unmarked graves.

It was after his father died that Mr. Sender Barayon decided to search for his mother and her murderer. First he reread several of his father's books; he had been told that his mother was the prototype for one or another character in them. The search then took him to Spain - to Barcelona, Madrid, San Rafael, Zamora. He met aunts from his father's and mother's families, and cousins as well. Two of his mother's brothers, he learned, had also been killed by extreme-right executioners. He found childhood friends of his mother, learned that she had been an excellent pianist and met people who had worked with her for the telephone company in Zamora and later in Madrid.

It was in Madrid that she met Ramon Sender, already a famous man, and lived with him in free love, as it was then called. She later married him in a civil ceremony, not in a Catholic church, and that counted against her when she was marked for execution: her priest and confessor refused her absolution before she was shot. Her betrayer, her brother-in-law Miguel Sevilla, later said it was at her confession that she invoked her own death penalty. But a contemporary journal wondered ''whether the secret of confession was so devaluated in those days, or whether Sevilla only pretended to know to excuse himself for not having moved a finger to save his sister-in-law.''

The most poignant narrative in the book is that of an old woman named Pilar, who, with her daughter, was in prison when Amparo Barayon was brought there with her baby, Andrea. Before she was taken away to die, Amparo gave Pilar a note for Ramon Sender (later torn up and eaten by Pilar out of fear). She also secreted a note in her baby's clothing. It was eventually found by agents of the International Red Cross when they were delivering the baby and her brother to their father, who had escaped into France as the Falangists took control of Spain.

On Oct. 11, 1936, in the cemetery of Zamora, Amparo was shot by one Segundo Viloria, a former suitor whom she had rejected, a trigger man on a Falangist execution squad during the war. It was not unusual during the Spanish Civil War for killing squads of the right and left to murder their victims in cemeteries - it was more convenient that way. Viloria eventually died insane in a government institution. Amparo's betrayer, Miguel Sevilla, had to leave his native village and died a pariah; the priest who had refused Amparo absolution before she was shot was later sent away from the town in disgrace by his church superiors.

''A Death in Zamora'' is not well organized. At times it is even confusing; which of its conclusions are verifiable and which are assumptions is not always clear. But it is a very moving document. Ramon Sender Barayon, about whom we learn too little, in the end discovers who his mother was: a lovely, independent woman, who lived with passion, who was devoted to her children and who had married a famous revolutionary writer. For all that she was murdered.