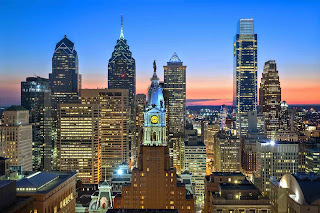 
BELIEVED TO BE MADE OF linoleum and asphalt crack sealant, the license plate-sized, colorful mosaic tiles have been seen in about two dozen major American cities since the 1980s. They’re known as the Toynbee Tiles, and their origin and purpose are a bit of a mystery.

After a lull in installation that appears to have begun around 2011, new tiles started to appear again in the past few years, in New York and Philadelphia. The reason behind the hiatus is unclear—could it be that the age of the tiler and the decades of installing artistically cryptic tiles by night had caught up with him? Had they fallen ill, or even passed away? Some speculate the hiatus was sparked from the attention drawn by the 2011 documentary, Resurrect Dead: The Mystery of The Toynbee Tiles. The 30-year span in which the tiles have been installed adds to the mystery of the true identity of the Toynbee tiler.

The tiles are generally laid in the summer months. After the design is created, it is believed that the tiles are wrapped in tar paper—a material commonly used during roofing installations. Tar paper is laid between the shingles and the roof to create a waterproof barrier, but in this case it is most likely used to prevent damage or removal before the tiles fully adhere to the asphalt.

The tiles are put into position and stuck to the ground with asphalt sealant. The weight of car tires and foot traffic combined with the summer heat help to gradually fuse each tile to the street and wear down the tar paper, revealing the messages and images carved by the unknown artist. No one is certain about the length of time it takes for a tile to fully adhere to asphalt, given that there’s no telling exactly when one has been laid, but given the materials used it is assumed that installation can take two weeks to a month to complete.

Fans and followers believe that the typical tiles are created by one person and that they are being laid simply by being tossed out of a hole in the floorboard of a car—a theory that was popularized by Resurrect Dead. This could explain the puzzling placement of some tiles and could be the reason no one has ever laid eyes on the tiler.

Christian Hauslein is a Toynbee Tile fan and former graffiti blogger who came across the tiles as he would walk around Philadelphia. “One of my favorite things to do is just go on really long walks with no real destination in mind. As I would do this I would notice Toynbee Tiles in the street, but never really know how they got there or what they meant,” he says. “When I ran the blog I kept a running collection of the Tiles as well as their locations. Not surprisingly, there were many others who found them as interesting as I do. It was also good because people would send me [photos of] tiles that I hadn’t seen before.”

Stanley Kubrick’s film 2001: A Space Odyssey focused upon a man who was reborn on a mission to Jupiter, and the Ray Bradbury short story “Toynbee Convector” is about a time traveler who returns to the present to inspire his contemporaries to build a future for themselves. Combine this with an excerpt from 20th-century philosopher and religious historian Arnold J. Toynbee—in which he shares his belief that the afterlife is not automatic, it is man made—and you’ve got yourself the fuel for a puzzling array of artistic tiles.

Though the media didn’t officially recognize the tiles until 1994, a 1983 Philadelphia Inquirer article briefly talked about a man with an apparent connection to the project, James Morasco. He had created the Minority Association, a group that hoped to be able to colonize Jupiter by resurrecting the dead there. Not surprisingly, the group was laughed out of most publications.

Colin Smith, a producer, writer, and co-star in Resurrect Dead, has seen Minority Association documents that make mention of multiple people being involved in the group. The Minority Association didn’t last more than a few years and allegedly had only four members. By the mid-90s, tiles began appearing claiming that the tiler was just one man.

Smith also moderated a message board linked to the film’s website, but it became a source of speculation about the people mentioned in the film and began to get out of hand. Although the board didn’t work out, Smith says he and those involved with the film have had great experiences with fans. The tiles bring out people who love a good mystery and the Resurrect Dead crew has enjoyed being able to meet those people at speaking engagements and hear from them via their Facebook page.

In addition to the main message, tiles began appearing with additional side messages attached to them, such as “MURDER EVERY JOURNALIST I BEG OF YOU.” This brings us back to the Minority Association, which has led many to believe that James Morasco, a social worker from Philadelphia, was behind the tiles. Morasco had contacted newspapers and talk shows to discuss his hopes to colonize Jupiter with the dead people of Earth, claiming to have come across the idea in a book by Arnold J. Toynbee.

A few longer tiles have been found with accounts of how the media had wronged the tiler—the tale includes the mafia, FBI, and NBC journalists and lawyers, an attempted hit on our beloved unknown artist causing them to flee the country only to be found in Dover, England and brought back to the states. Connecting the dots, it would appear that the tiler felt targeted for their beliefs of resurrection—but has returned and been able to spread their message anonymously through art.

Copycats have been found in the states and as far away as South America, with some translations of the original message made as well as small robots. The most notable is the House of Hades movement, which, much like the Toynbee Tiler, could be one artist or multiple. Their tiles usually feature a nod to the strife of the Toynbee artist in that their main messaging is “HOUSE OF HADES TILES MADE FROM THE GROUND BONES OF DEAD JOURNALISTS.” Some tiles are framed by a woman’s legs splayed open, something the Toynbee tiler wouldn’t have done, but they’ve also been known to create exact copies of the Toynbees. Interestingly, House of Hades is known to distribute their art through the mail, sending tiles to people in various locations to have them installed by someone else, which explains how widespread they’ve become over the years.

There are many theories on who the Toynbee tiler truly is, but no concrete evidence has been found. Smith and the documentarians behind Resurrect Dead believe they’ve cracked the case, but aren’t disclosing any identities. Justin Duerr, the lead in the film, claims to have stood face-to-face with the artist. He’s also claimed to have met one of the anonymous members of the House of Hades, though much like everything else surrounding the tiles, the details of their conversation remain a mystery.

Credits:  This article originally appeared under the title "The Tantalizing Mystery of the Toynbee Tiles" in 2017 in Atlas Obscura.
at July 30, 2018