In 1868, at the age of 23, Gerard Manley Hopkins decided to burn the poetry he’d written up to that time: “Slaughter of the Innocents,” he noted in his journal. Recognizing that poetry depended on deep and perhaps dangerous feeling — and given what he would later concede was a disturbing affinity with Walt Whitman (“a very great scoundrel”) — Hopkins decided it was incompatible with his calling to the Jesuit priesthood.

In that capacity Hopkins would persevere amid ghastly privations, though he could not entirely escape his destiny as one of the most influential poets of the 20th century (a century he would not live to see). As Paul Mariani points out in “Gerard Manley Hopkins,” his generous new biography, the “unpromising beginnings” of Hopkins’s prosodic revolution were in a Jesuit classroom in London, where as a teacher of rhetoric he tried to impart something of his enthusiasm for the later rhythms of Milton and the alliterative effects of the Anglo-Saxons. Then, in 1875, Hopkins was peculiarly moved by the sinking of the Deutschland — in particular by an article in The Times of London about five Franciscan nuns (fleeing the anti-Catholic laws of Bismarck’s Kulturkampf) who clung together in the storm while the tallest cried, over and over, “O Christ, come quickly!” With his rector’s blessing, Hopkins wrote a sprawling tour de force titled “The Wreck of the Deutschland,” in which he first “realized on paper” the oratorical possibilities of so-called sprung rhythm. As Hopkins would tirelessly explain (in so many words) for the rest of his life, this involved “scanning by accents or stresses alone, without any account of the number of syllables, so that a foot may be one strong syllable or it may be many light and one strong.” 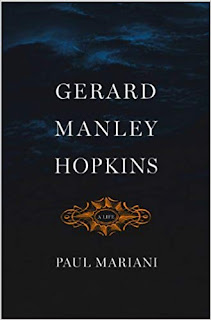 Robert Bridges, the future poet laureate of England, informed his friend Hopkins that he’d managed to read all 280 lines of “The Wreck of the Deutschland,” but would not be persuaded for any amount of money to read it again. And yet Bridges remained beguiled by the possibilities of sprung rhythm, attempting (with indifferent results, as Hopkins saw it) to use it in his own work. When at last he saw fit to introduce Hopkins’s singular poetry to the world, some 30 years after his friend’s death, Bridges opened the volume with “The Wreck of the Deutschland,” “like a great dragon,” he wrote, “folded in the gate to forbid all entrance.” Entrance would be gained, however, and toward the end of his biography Mariani gives us a nice glimpse of Bridges’ venerable dotage, when he was visited by Virginia Woolf and Aldous Huxley — not because those two modernists wished to see the laureate himself, but rather because they wished to see “the Hopkins manuscripts” in the laureate’s possession. “Even the self-contented Bridges must see a certain irony in all of this,” Mariani observes.

I guess it’s not imperative for biographers to dwell on their subjects’ sexual inclinations, though most would agree it’s kind of crucial in Hopkins’s case, and Mariani is almost coy on that point. In one case, we are told that Hopkins distanced himself from a younger classmate at Highgate, Alex Strachey, because he found the lad’s company too “pleasurable” (“and therefore . . . too dangerous,” Mariani adds in decorous parentheses). Various other hints are given — Hopkins likens a part of himself to Stevenson’s Mr. Hyde, and never mind his disturbing Whitman affinity — until we can safely assume that, yes, Hopkins had strongly homoerotic impulses. What this conceivably had to do with his religious vocation, not to say ­every other significant aspiration (or denial thereof), is largely unexamined.

Nowhere is Mariani’s evasiveness more curious than in the case of one Digby Mackworth Dolben, a 16-year-old cousin of Bridges who visited Hopkins at Oxford in February 1865. Among other eccentricities, Dolben wrote feverish poetry in praise of the masculine Christ (“Then, my own Beloved . . . Lay me on Thy Breast”), and, as even Mariani admits, Hopkins sensed the young man was a “kindred spirit.” After Dolben’s departure, Hopkins noted his dismaying erotic urges (that crucified arm) and wistfully asked Bridges to give his love to Dolben: “I have written letters without end to the latter without a whiff of answer.” Finally, a sense of his own sinful nature became so oppressive that Hopkins sought consolation — or so a number of scholars would have it — in the solitary, ascetic life of a Jesuit. “My sap is sealed,” he wrote toward the end of 1865. “My root is dry.”

Mariani explains Hopkins’s conversion in terms of a rather nebulous epiphany on the road to Horsham in 1866 (nothing about a dried root), and mostly he dis­poses of Dolben in a single, tortuous sentence, as if to be done with the whole disconcerting business at once: “Two weeks later, the handsome and irrepressible 19-year-old Digby Mackworth Dolben, Bridges’ distant cousin who was so fascinated with the play of Catholic ritual, often to the point of delusion, and who the year before had walked the streets of Birmingham barefoot, dressed in the tattered brown robe of a Franciscan, the young man who at Hopkins’s instigation and example had contacted Newman earlier to say he was undergoing a religious crisis and would Dr. Newman see him, and then, talking it all over with his parents, wrote Newman back to say the whole thing had been a mistake — this brilliant, wispy flame who had expected to matriculate at Balliol and then fainted during the examinations and so missed his chance — drowns.” Wait, who drowns? I traced the sentence back with my finger and found it: ah yes, Dolben, who is mentioned a few more times before sinking into the welter.

As one may gather from the preceding quotation, Mariani’s prose is a little on the quirky side; the better for readers to get used to it, he may want to move his acknowledgments to the back of the book in future editions. As is, it’s rather like being greeted by a friendly leprechaun: he thanks the “tykish” Rev. Joseph Feeney, and describes his agent as “a Virgil leading his erstwhile pilgrim through the under­brush and malebolges.” Likewise, in his critical discussions — though he’s very good at describing the technical aspects of Hopkins’s work (“curtal” sonnets and the like) — he lapses into a kind of obscure lyricism that appropriates his subject’s diction to such an extent that it’s hard to tell where Mariani leaves off and Hopkins begins. Had I recently reread the poem “Inversnaid,” say, I would have more readily grasped why Mariani would write about Hopkins, “His heart opens to the lightsome fawn-froth of the beadbonny stream twindling over the dark waters below”; as it happened, I was puzzled until I came to the poem itself, as quoted by Mariani, in which the words “fawn-froth,” “bead­bonny” and “twindles” appear.

Mariani is at his best in evoking the objective details of Hopkins’s life, especially the squalor that seemed the lot of a Jesuit in 19th-century Britain. The nadir came during his last years in Dublin, where as a classics teacher he spent night after night poring over dreadful exams, making scrupulous “quarter-point and eighth-point” distinctions lest his pupils miss out on attending a university — “his eyes bleeding,” as Mariani tells it, “plagued with diarrhea, the chamber pot filling, a small smoky coal fire, . . . the fate of thousands of students in his hands.” After that, his death at 44 in 1889 must have been a positive comfort (“I am so happy” were the poet’s dying words), all the more so in the wake of his last, cathartic “terrible sonnets,” including his heartbreaking “Thou Art Indeed Just, Lord”:

Why do sinners’ ways ­prosper? and why must
Disappointment all I ­endeavor end?
Wert thou my enemy, O thou my friend,
How wouldst thou worse, I wonder, than thou dost
Defeat, thwart me? . . .
Mine, O thou lord of life, send my roots rain.