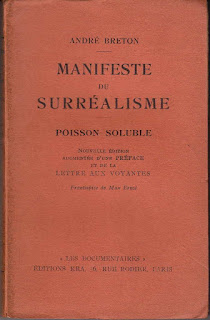 Surrealism as art verbal or otherwise may be adored or despised--and perhaps the latter was a perverse measure of success for practitioners who rejected acceptance in any form and on any terms. Nevertheless, you always risk becoming what you devour, and setting yourself up as the enemy of a life lived most comfortably has yet affected the demand for, say, sofas, timetables, and fruit salad. The bourgeoisie consume these products, in addition to great quantities of stuff Surrealism tried desperately to expunge from daily life. But, alas, fashion, Hollywood, and advertising made (some might say, easy) commerce out of the likes Cocteau,  Miró, Man Ray, and Dalí.

In 2007, London's Victoria & Albert Museum put on "Surreal Things," an exhibition that explored the relation between art and commerce; the exhibition was less about relations and more about marriage. Somewhere along the line, Surrealism married itself to consumerism. Divorce, at this stage, is unlikely. For those who dislike Surrealism (or the avant-garde), you can get your revenge by purchasing--say--a poster of "The Gift;" to do so is as if you were hammering another nail in the coffin that contains the scandalous origins of the Surrealist movement (and there is no doubt that coffin is also up for sale).


In 1924, André Breton penned "The Surrealist Manifesto." The "Manifesto" is full of pronouncements: "Christopher Columbus should have set out to discover America with a boatload of madmen."; "Paul Valéry who, some time ago, speaking of novels, assured me that, so far as he was concerned, he would continue to refrain from writing: 'The Marquise went out at five.'”; "Hugo is Surrealist when he isn't stupid." A boatload of madmen bound for the Indies? Some would call that history, not Surrealism--unless you happen to be Breton. He is often quoted as referring to Mexico as  the most surrealist country in the world. (Apparently, he had trouble finding his way around).

Perhaps one of the greatest scandals committed by Breton was his foray into politics.  He joined the French Communist Party in 1927 (and was expelled in 1933).  Always a determined renegade, Breton warded off anything remotely doctrinaire by exploring revolutionary politics through mythology and occultism. In 1848, Karl Marx in "The Communist Manifesto" warned of a "specter" haunting Europe; seventy-eight years later, Breton responded with trances and seances.

Breton was a singular champion of the imagination. He wished to unfetter thought and un-cage the mind. He detested mechanization and rationality, both of which represented for him an assault on imagination and fantasy. 'To reduce the imagination to a state of slavery – even though it would mean the elimination of what is commonly called happiness – is to betray all sense of absolute justice within oneself," Breton writes in his manifesto. Society forces people into this condition of slavery over a period of time and with age:  the innocence of childhood is put in a lockbox; play is outlawed; reverie is vilified.  The result is a society of sick individuals in dire need of a cure.  Fantasy is that cure.

Breton's fascination with fantasy and dreams is regularly attributed to Sigmund Freud, and with reason; in his manifesto, he applauds Freud's recognition of the importance of dreams, and yet this admiration for Freud is willful.  Freud was focused on the dreamer (patient) whereas Breton was interested in dreams for their own sake.  This subversive approach to Freud speaks to the influence of Jean-Jacques Rousseau on Breton.  According to Tanguy L’Aminot:

For Breton (for L'Aminot), only children know what it means to harbor secret wishes and celebrate their dreams. It is Rousseau, author of Emile, who aids and abets Breton in his argument that the un-imaginative, grown-up life is hardly worth living.

The surrealist politics of psychic and sexual transgression continue as inspiration and dismay.  Some decry what they describe as the surrealist hangover; others (many others) have found aesthetic purpose in dreams, magic, occultism,  and mythology.  These days, however, it is as though one becomes a surrealist by default.  Surrealism has lost a good deal of its association with Breton's ideas and tends to be used as shorthand for whatever is deemed exotic.

And then there is the surrealist contradiction with respect to freedom of expression.  Weirdly,  for a movement devoted to freedom of expression, the methods of the Surrealists are very much rule-bound. From free association to ink blot drawings to cut-outs, much of what passes as spontaneous is in fact manufactured--and not by design.  Breton wished more than anything to find new avenues of creativity; it is just that the avenues have stop lights, street signs and apartment numbers. Surrealism is full of instructions and imperatives.  There is a great deal of structure and logic to the madness.

It's hardly surprising that some of the most famous Surrealists adored the game of chess.