An Unconventional Life of His Mind : A biography of Andre Breton in turn becomes a biography of a culture in turmoil

For most Americans, the name Andre Breton, if they know it at all, stirs some uncertain if intriguing memories. Didn't he invent surrealism? Didn't he go in for automatic writing? Wasn't he a Communist for a while? Didn't he interview Freud? Mark Polizzotti answers all these questions--with "yes"--and dozens more in this exhaustive biography, a volume that tells everything anyone would want to know about Breton, perhaps more. 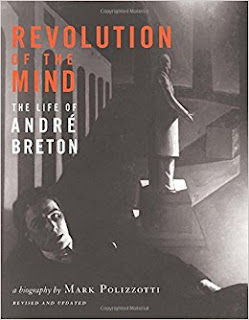 Yet, for all its devotion to the smallest detail, its patient tracing of Breton's life almost day by day, the book remains consistently absorbing. This is so in part because it clearly sets out the kind of gossip inseparable from so defiantly unconventional a life--Breton's sordid love affairs with unstable women, his emotional ventures into French radical politics, his dramatic oscillations between needy dependence and bossy authoritarianism--in part, too, because Polizzotti never loses the thread of his story. A few stylistic lapses apart, he writes convincingly and with insight. And he has done his homework: He has had access to unpublished materials and knows his way around the published materials.

What is more, Breton is simply an interesting man; while a far from admirable character, impulsive and self-centered, he met nearly everyone on the French literary scene and modern painters including De Chirico and Picasso and quarreled with most of them; his list of acquaintances reads like a Who's Who, mainly of the French Left, in the first half of the 20th Century, so that this biography becomes almost incidentally a collective biography of a culture in turmoil.

Andre Breton was born in 1896 in a small town in Normandy to a genial father, insistent only on a single topic, anti-clericalism, and to a severe, unloving mother whose main purpose seems to have been to terrorize her son and to make him respectable, an assignment in which she conspicuously failed. If Breton later idealized childhood, it was a childhood he never had. Unenthusiastically, he let himself be pushed into studying medicine--he would serve in World War I as a medical auxiliary--but soon found his vocation: He would be a poet. In his voracious reading and interminable debates with like-minded friends, he developed powerful enthusiasms, almost infatuations--for the French romantics Mallarme, Valery, Rimbaud, Apollinaire, Lautreamont; French psychiatrists; Freud--who worked for him like substitute fathers to point the way to his lifelong search: the irrational sources of the mind as they erupt in his poetry and the raucous public happenings he organized.

Breton's grand quest derived its energy as much from his adversaries as from his allies: conventional literature, middle-class tastes, liberal icons like Anatole France were ideal targets for his unsurpassed gift for invective and noisy demonstrations. Except for a vague anarchist ideal of freedom and an unconquerable distaste for propriety, often expressed with explosive, obscene gestures, Breton and his little band had no program. Order was the enemy, order and the bourgeoisie. In his denunciations of the latter, Breton went far beyond the greatest French hater of the bourgeoisie, Gustave Flaubert, an ancestor whom he does not cite yet whom he resembles in his overpowering sense of revulsion at the spectacle of that much-maligned class, its hypocrisy and its piety.

It was in the midst of war, in 1916, that Breton discovered Dada, just launched in Zurich, and took important impulses from that tiny but articulated band. Disgusted with a rationalist culture that had caused an insane war, and endowed with a superb gift for publicity, it proudly and ominously announced, "Dada does not mean anything." The author of this slogan and leading spirit of this self-declared destructive movement, Tristan Tzara, became for a time, after he turned up in Paris, Breton's close associate.

The roots of surrealism in Dada's conscious absurdities and nonsense poems were plain, but several intervening experiments were needed before Breton was ready to proclaim surrealism as a full-fledged and self-conscious challenge to bourgeois civilization. One of these steps was automatic writing, which Breton and his closest friends practiced in 1919, jotting down free associations that abandoned any of the rational controls, any censorship of style, that was the indispensable tool of saner writers. Then came Breton's disillusionment with the Dadaists working in Paris, one of many, finally followed by his confident establishment of a group ready to follow him into new territory. The surrealist manifesto of 1924, written by Breton, stated its program and traced its lineage. Surrealism, as he defined it, is "Psychic automatism in its pure state, by which one proposes to express--verbally, by means of the written word, or in any other manner--the actual functioning of thought. Dictated by thought, in the absence of any control exercised by reason, exempt from an aesthetic or moral concern."

This uncompromising definition also implicitly defines Breton's conduct as the undisputed leader of the surrealist pack: He purged those who deviated from his strict line or had "sold out" by writing for the respectable press, and, translating depressions over amorous catastrophes into ideological questions, banished from his presence friends who had not sufficiently sympathized with him during love affairs or, in the late 1920s, a messy divorce. In the eyes of Polizzotti, clearly fascinated by his subject but distant enough to be objective about him, Breton was indomitable in opposition and intolerable in power.

Early in 1927, after painful and prolonged discussions in the inner circle, Breton applied for membership in the Communist Party. It proved a calamitous move, but from his point of view probably predictable. True, surrealists claimed to value artistic independence above all and a number of them found the very idea of submitting to strict political discipline, especially as dictated from abroad, too detestable to contemplate. But with their contempt for the bourgeoisie and the widespread politicization of art and literature in the hectic 1920s, other surrealists, Breton among them, saw the Communists as their natural allies. Some of Breton's closest associates, notably Louis Aragon and Paul Eluard, the most prominent writers in the group, joined him, and Aragon in particular became Moscow's faithful, shrill servant. Still, Breton kept on writing in his own way; in 1928, he published his best-known book, "Nadia," which in his characteristic unconventional way tells the story of an affair with a near-psychotic young woman and of her breakdown. Indiscretion was the surrealist Breton's strong suit as a matter of principles; he would faithfully report his infatuations and his sexual triumphs to his long-suffering wife Simone until she could take no more and divorced him. His private life remained as chaotic as ever; he kept discovering dazzling women and being discovered by others. In 1934, he married again, hoping for some stability.

But the world would not let him alone. History overtook Breton, as it would so many other literary folk arrogantly making political pronouncements on the slightest acquaintance with the issues. No one except a true hermit could ignore the Great Depression and the elevation of Adolf Hitler to the chancellorship of Germany in 1933, and for some time, Breton remained loyal to the French Communist Party. Even as he dissented from the prescribed party line, he tried to maintain cordial relations with the Party. But, unlike Aragon, he was unwilling to surrender his autonomy or his admiration for Trotsky, whom he visited not long before his assassination, and decisively broke with Moscow. In 1941, after the defeat of France by the Nazis, he moved to the United States with his second wife and young daughter. He was safe, but otherwise life remained vintage Breton. He would not learn English but found French refugees with whom he could speak his beloved native language. He enjoyed a certain resonance among American collectors and museum directors. He separated from his wife and found a third one.

In 1946, he returned to France. His old enemies, most of them his former friends, were still there, some of them more powerful than ever, and he spent most of his remaining years rallying the troops that remained, inducting a new generation into surrealism, and refusing lucrative prizes although he needed the money. He was the Founder, and let no one forget it. When he died in 1966, just before turning 70, more than a thousand mourners went to the cemetery to say farewell to the Pope of Surrealism.

What remains? Mainly some memorable art--ready-mades by Marcel Duchamp, perhaps the only person before whom Breton was, shyly, reduced to silent adoration; the early paintings of Giorgio de Chirico; the collages of Max Ernst; the work of Joan Miro and of Rene Magritte, an impressive body of work that still attracts our attention. The poetry and the fiction have become more a sign of the times than a body of literature to which we turn with pleasure, or even great curiosity. There are some remarkable parallels between surrealism and psychoanalysis, but the differences loom far larger. The aim of psychoanalysis, as Polizzotti puts it, is to replace as much id as humanly possible with ego--the aim of surrealism was to celebrate the id without any concessions to the ego. Viewed by the surrealists as a liberation of the deepest human passions, their program now seems more frightening than admirable. But as a historical movement, it retains its interest. Polizzotti's full guide to Breton's life will not need to be redone for a long time.

Credits:  This article originally appeared in the LA Times.
at June 18, 2018