A few pages into Robert Harbison’s “Ruins and Fragments: Tales of Loss and Rediscovery,” I had to stop, catch my breath, and laugh. Harbison opens the book by reflecting on a chunk of the Pergamon frieze, which was part of a second-century B.C. altar and which depicts, among other things, the mythical battle between the Greek gods and giants. The chunk somehow ended up in the “decayed industrial town” of Worksop, in Nottinghamshire, England. Meditations on the frieze lead Harbison to Peter Weiss’s “immense historico-political novel ‘The Aesthetics of Resistance,’ ” a book composed of “unwieldy blocks” of prose, not unlike the unwieldy fragments of stone that the Pergamon frieze has become over time. From Weiss we move on to Bernardino de Sahagún and Guaman Poma, “two preservers of the native cultures of Mexico and Peru.” Sahagún’s “General History of the Artifacts of New Spain” (1575-7) interests Harbison primarily because it was suppressed in Spain and “disappeared for two centuries until the hand-coloured original was discovered in the national library of Florence in the eighteenth century.” A paragraph or two about Poma and Sahagún and Harbison is off to a garbage dump in “the vanished Egyptian town of Oxyrhynchus,” where fragments of lost plays by Aeschylus have been discovered. We are eight pages into the book. 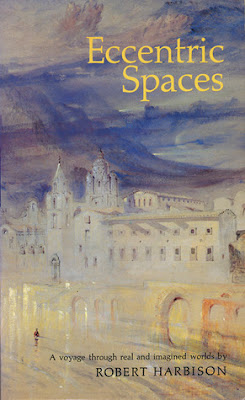 Robert Harbison is a hard figure to pin down. He’s an expert on architecture—at least, he lectures about architecture here and there, though he doesn’t hold a position at any institution. He wrote a book called “Eccentric Spaces,” which was first published in 1977, and in 2000 was reissued by M.I.T. Press. On its website, M.I.T. Press explains that the book concerns “the mysterious interplay between the imagination and the spaces it has made for itself to live in.” Richard Todd, in a review of the book for the Atlantic Monthly, wrote that “Eccentric Spaces” “awakens the reader to the space around him” and described the book as “a reminder of how much we want from the world.” Reading these descriptions and others, one gets the sense that many smart people like Robert Harbison’s writing and aren’t entirely sure what it’s about.

There are also those, of course, who don’t like it. In 1980 the writer Brigid Brophy dismantled Harbison’s “Deliberate Regression” (subtitle: “The disastrous history of Romantic individualism in thought and art, from Jean-Jacques Rousseau to twentieth-century fascism”) in the London Review of Books. Brophy found herself violently annoyed by the following sentence:

The way out of the impasse brought on by the decay of religion available to Wilson was an authorised version of Ruskin’s symbolic correspondence, authorised by duplicated evidence from the distant past excavated by science, and institutionalised by the artist in specific forms, like the Brighton chalice, also a calyx, a flower on its stem, attempting to work a magic which would inhere in a thing not just in one’s method for contemplating it.

“This shock-horror pile-up on the motorway manner of writing makes it hard to sort out what belongs to what,” Brophy wrote. And she has a point. You do tend to smack into such pileups when reading Harbison. This is true of “Ruins and Fragments,” too, though the grammatical traffic accidents have become a bit less dramatic, by and large. Ponder, for instance, this sentence from the prologue: “The story begins with dramatically shorn off ancient fragments, of the Pergamon frieze and Aeschylus’ plays, but we find them stuck to other things that in one sense have nothing to do with them, a grimy location in England or a rubbish dump in Egypt, but their later history is now part of them and makes these ragged scraps more riveting than the others who stayed behind in their proper places.” Not as egregious as the sentence Brophy singled out, granted, but something does go syntactically awry once we get into the first subordinate clause. Harbison seems to find nuances of meaning in the word but that are unavailable to the rest of us.

Still, just as we are about to give up on Harbison and his unfathomable sentences, we come across this line, in which he discusses the often haphazard way Montaigne structured his “Essays”:

The seeming randomness or scatty variety of Montaigne’s titles isn’t actually borne out by the text: the reality is much worse, a writer who when he wants to change the topic is capable of saying ‘And now to change the topic.’ But constant change isn’t irresponsibility or faithlessness, but almost the reverse, a kind of integrity in pursuit of the natural rhythms of consciousness. He becomes increasingly aware that his quarry is the self in all its hideous inconsistency.

Admittedly, Harbison’s now-familiar compulsion to drag the word but into rather odd territory is once again on display. Still, we must give some credit to a thinker who can call Montaigne’s writing “scatty.” More substantively, the description of Montaigne as “in pursuit of the natural rhythms of consciousness” is genuinely illuminating. Also, “the self in all its hideous inconsistency” is a great phrase. Harbison is talking about Montaigne here, but he is also, obviously, talking about himself.

Toward the middle of “Ruins and Fragments,” Harbison gets lost in a rambling but delightful discussion of Laurence Sterne’s impossible-to-categorize eighteenth-century novel “The Life and Opinions of Tristram Shandy, Gentleman.” Harbison is trying to explain the structure of Sterne’snovel, which is largely the deviation from any structure.

As each deviation from regular progress is announced, we may view it as an amusing prank—certainly the Preface finally appearing in volume three reads this way—but with a little distance, or maybe, having built up sufficient stock of such surprises, we begin to see it as an expression of the way reality works. And finally we come to feel that the whole effect is a symphonic version of the ungraspable flux of our consciousness, which moves with a life of its own, essentially out of our control.


As with the meditation on Montaigne, Harbison is clearly doing something autobiographical here. But the passage applies not just to Sterne and Harbison but to the rest of us as well: we are all symphonic fluxes. We grasp, we fumble. We hit on an illusory fragment of stability now and again, but we are not in control.

And this, ultimately, is why Harbison is so interested in ruins and fragments. They are not, in his view, aesthetic amusements to be discovered at the periphery of civilization but clues to “the way reality works.” Fragments can, paradoxically, reveal more than the whole from which they came. They tell a greater truth about fragility and time than perfectly preserved monuments. Harbison regards ruins and fragments so highly that he has written a book about ruins and fragments that reads like a series of ruins and fragments.
Plenty of others before him have written about the power of such objects, and many of those writers have crafted smoother sentences and published better-organized books. But there is a beauty in the symmetry between Harbison’s subject matter and his style. It is possible, of course, to conclude, as Brigid Brophy did, that Harbison’s mind is as jumbled as his sentences sometimes are, and that there is nothing salutary to be found in mental jumbles. One might even invoke the mimetic fallacy. But those of us who love his work love precisely the way those intellectual jumbles reflect an idea about the world.

If you have not read his work before, and wonder in which camp you will find yourself, consider the following pileup from near the end of “Ruins and Fragments”:

Among Homer’s archaisms are certain ruin-words, mainly adjectives, that no one claims securely to understand, which, it has been proposed, he didn’t understand either, but saved into his verses out of respect for their supposed antiquity. One of them—amumon—had usually been translated ‘blameless’ by analogy with a similar known word, until Anne Amory Parry insisted the word couldn’t apply to Aegisthus, Clytemnestra’s accomplice in murder, so it is probably better understood as ‘handsome’. Even so it remains a patch of obscurity, like a knot in wood that there is no way to straighten into intelligible, smooth running grain.


You may smile with satisfaction after reading this paragraph, with its unlikely simile that pleasingly gets at the knotty delights of Homeric Greek. Or you may wince at its clauses and commas and general clutter. I am of the former camp. To me, Harbison’s books, difficult as they may sometimes be to understand, consistently provide brief, fragmentary glimmers of hope.