Art has been a religion ever since modern art galleries began in the late 18th century. But religion implies blasphemy, and the underside of aesthetics rears its grossly distorted head in Carnivalesque (the exhibition). It demonstrates that for every noble aspiration we have to contemplate the finer things, we have an equal and opposite urge to gorge, puke, screw and fart our way to the bottom of the barrel. 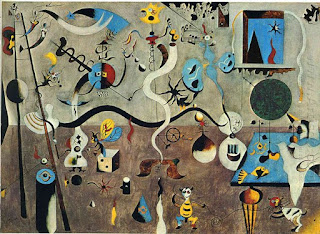 Today we talk about our divided nature in the language of the unconscious, but in the middle ages it was imagined in extravagant mythological terms as the War of Carnival and Lent. This was a Lenten world ruled by Christianity and poverty, but once a year each town would stage its carnival and the world would explode in a shower of sausages, long noses, big bottoms and immense turds.

Carnivalesque traces the way carnival has manifested itself in art from the middle ages to today. Here, Paul McCarthy's Spaghetti Man (1993) - a lifesize plastic man wearing an animal head, with his penis transformed into several metres of flaccid, flesh-coloured rubber hose - is set in the same art historical space as a Flemish diptych from circa 1520. This opens up to reveal not - as a pious person of the time would have expected - a religious image, but a painting of a huge hairy spotty arse pricked by a bunch of thistles. You only have yourself to blame. On the outside of the diptych is painted a warning not to open it; inside, opposite the raddled arse, it says in so many words "told you so". Its parody of Christian art seems very subversive, but Philip II of Spain, a Lenten monarch if ever there was one, loved to look at a similar object as a relief from persecuting heretics.

In the 1930s the Russian literary critic Mikhail Bakhtin, the inspiration for this show as well as dozens of academic theories about the "carnivalesque", argued that "carnival laughter" is "the laughter of all the people" and an assault on all hierarchical order. Bakhtin was living in internal exile in Kazakhstan when he wrote this and was obviously thinking of Stalin when he claimed in his classic study Rabelais and His World (not published until 1965) that "no dogma, no authoritarianism, no narrow-minded seriousness" can co-exist with carnival.

But the imagination is a frightening place and the carnival world this exhibition explores is anything but a jolly libertarian paradise. It is a scary place where people you know suddenly put on huge hairy wooden masks and turn themselves into monsters. Some of the most unsettling pictures here are James Ensor's masked nocturnal invaders in early 20th century Belgium. Even nastier are Philip Guston's Ku Klux Klansmen, reduced to pairs of beady black eyes and pointed masks. You see the Klan through Guston as a version of European carnival; the infamous white garb is a vicious form of the masquerade outfits in Tiepolo's paintings and drawings of 18th-century Pulcinellas at the Verona carnival.

Carnival can be cruel. This exhibition demonstrates that its structure persists across centuries: the same masks, the same bottom jokes, a shared stock of images. What you have to conclude is that our personal desires or terrors are not private but shared. Carnival is an aesthetic phenomenon manifesting our need to look at the ugly as well as the beautiful. It is the inversion of the classical idea of perfection. If we will always take pleasure in straight lines we will also always laugh at someone showing their arse.

What is so clever about this exhibition is that it resists the temptation to stick in any old bum or sausage. It keeps its fools and masked pranksters firmly under control and because of this precision it is able to tell an alternative history of art. Carnival has seeped up into high art from Goya to Louise Bourgeois, whose stumpy voodoo doll made of pink quilting is repellent yet mesmerising. Just when you think those pancake-eating Bruegel peasants are a bit quaint you recognise this world of upside-down folly, boozing, gorging and beating each other with sticks, as our own. As Robert Crumb says, looking in a mirror on the cover of Self-Loathing Comics, "Is that me?

In contemporary art the classical notion of beauty has been almost entirely eclipsed by abjection; carnival has won. The man in a fool's cap presenting us with a turd on a plate in a 16th-century engraving by Peter Flötner turns up again in Paul McCarthy's video Bossy Burger. "Ha, ha, ha," says McCarthy, wearing a blood-spattered chef's hat and a mask based on Mad magazine's grinning kid, "Ho, ho, ho."

Credits:  This article originally appeared in 2002 in The Guardian.  It has been slightly edited for the sake of coherence and timeliness.
at May 02, 2018