Beguiled by Another Prague

PRAGUE'S Art Nouveau curlicues, once seductively frivolous, just seemed flighty now, and its Gothic arches, though still handsome, were suddenly dull. Even the spires atop churches and schools bothered me, glinting like cheap baubles in the sun.

To be fair, on my early April visit the city was beautiful, the clumsy traces of its Communist past largely gone, its streets updated with plush cafes and babble from half a dozen lands. It sparkled, albeit demurely, a picture of poise as the Czech Republic readied itself to join the European Union. On the first warm day of spring, it was all unquestionably lovely.

But, frankly, it was a little boring, too. The City of 100 Spires, the Golden Prague of travel books, the shadowed streets where the myth of Kafka still skulks thanks to T-shirts and tour guides had lost its allure for me. After 12 faithful years as a resident and then a visitor, I was restless and ready to stray. I snubbed the crystal and gilt of the Beaux-Arts Obecni Dum, the Baroque palaces, the cherubs and serpents cavorting on scrubbed facades and, for a few days, allowed myself to be seduced by another Prague.

While Berlin had the Bauhaus, and Paris Le Corbusier, Prague nurtured its own Modernists. In the years before World War I and the interlude between the two world wars, they filled the city with innovative and sleekly functional buildings. Yet for decades their work was lost to most of the world. The Communist government disdained Modernist architecture as bourgeois indulgence, a dalliance of a young democracy best forgotten. Now, a stroll through the heart of the city reveals sweeping curves of concrete and gleaming walls of glass, newly buffed and retrofitted for the 21st century. They return a missing chapter to the history of 20th-century European architecture, and offer an unexpected -- and slightly rakish -- counterpoint to Prague's more familiar trove of architectural treasures.

Some of the city's Modernist buildings have been turned into museums and private offices, others returned to their original use, as banks or stores. In their designs, the bombastic curves and stucco flourishes favored by the Hapsburgs gave way to clean, straight lines and simple shapes. Finding them is like discovering an old mirror that, when polished, holds a reflection from long ago of a short-lived nation that emerged from the ruins of the Hapsburg Empire, determined to sprint until it reached the future. 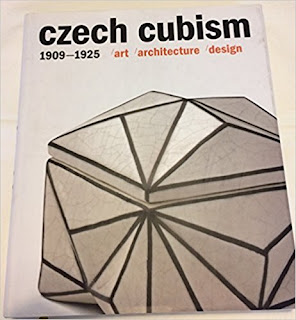 That was the Prague I craved, one where even the materials used for its buildings were modern stone, glass and steel, products of an increasingly rich industrial state. I yearned to revisit its Cubist apartment houses whose origami angles sometimes seemed to fold in on each other. On the wide expanse of Wenceslas Square, in the center of town, I lingered by glass-fronted buildings as beguilingly modern now as they were 80 years ago -- some, like the Bata shoe store, again ablaze with neon. I planned the best time to gaze at Veletrzni Palac, now an art museum but originally the Trade Fair Hall, designed with the balanced precision of a 1920's ocean liner.

In the hilly residential quarters surrounding the center, I found villas so spare and timeless they would be the envy of the neighbors were they built today. Downtown, along the main shopping street, Na Prikope, I peeked into sleek covered passageways lined with gray and white marble. And when I needed a rest, the slightly faux Art Deco Cafe Slavia beckoned from the Vltava Embankment offering views of Mala Strana, the neighborhood surrounding the castle, from a room illuminated by lights the color of absinthe.

The Czech architects of the 1920's and 30's had visited Russia and Germany, the Netherlands and France, and returned determined to create a style more modern yet, and not just in Prague. Brno, a center for manufacturing, and Zlin, home to Bata, then the world's largest shoe manufacturer, became architectural showcases, too. President Tomas Masaryk hired an iconoclastic Slovene architect, Josip Plecnik, to modernize portions of Prague Castle. Le Corbusier came to lecture, and to look for work. (He found none.) And 12,000 people trekked up a hill in the Prague neighborhood of Baba to inspect a community of model homes that were daringly flat-roofed amalgams of horizontal and vertical spaces.

''It was a young, new state, and they realized that architecture could play an important role to promote a vision of modernity, of modern democracy,'' Jaroslav Andel, an art historian, told me as we looked at architectural photos he had unearthed from the 20's and 30's.

Or, as Stephan Templ, an architectural historian and writer, explained later, ''Modernism was almost a state style here.''

''Czechs,'' he added, ''had a feeling they had to show their individuality.''

I understood what he meant as I stood on a busy street at the edge of the Old Town outside the Czechoslovak Legion Bank, completed in 1923. I wasn't sure where to look first. Through the large windows, I could see into a vast lobby, and I stepped inside, feigning interest in the A.T.M.'s. It was like a kaleidoscope that had been stilled, colored circles and crescents stopped in midwhirl, mosaic on the floor, painted stucco on the ceilings and walls, all of it in blue, red and white, the colors of the Czech flag, except muddier. It made me a little dizzy, as if I were looking down on a room full of swirling folk dancers.

Outside, above the doorways and past tall, vertical windows, a long procession of stout, angular figures stretched across the facade in a relief called ''Return of the Legionnaires,'' the Cubist sculptor Otto Gutfreund's vision of World War I soldiers.

While the building didn't look especially modern, it was certainly unique. As Mr. Templ had explained, Josef Gocar, the architect, wanted to create a National Style, mixing motifs from Moravian folk art with Cubist elements that he softened, creating Rondocubism.

To see Veletrzni Palac, now the state Museum of Modern and Contemporary Art, I took a tram over the river. Built as a hall for trade shows when the Czechoslovak economy was booming, the sleek, white structure, its windows outlined in bright blue, filled an entire block in the Holesovice section of town. When it was completed in 1928, nothing of its size or style existed in Europe. Le Corbusier pronounced it ''interesting, but not yet architecture.''

Undeterred by his assessment, I wandered inside, stopping to look at photos taken soon after it opened, when signs in eight languages hung near the entrance. I would have been satisfied just to linger around the oval running-track-shaped space; it was a lot like being on the deck of a ship, one with a skylight stretching above.

A fire destroyed much of the interior in the 1970's, as a small exhibit on the building's history explained, but I wouldn't have known. Nor would I have known that when the Nazis occupied Prague, the building and its grounds were the collection point for Jews being sent to concentration camps. Now, it was filled mainly with 20th-century Czech art and Czech-designed objects from the 20's and 30's: chrome-plated lamps and cabaret posters, a toaster so sleek it seemed it might fly, and a bouquet of silk dresses, my favorite splashed with red beaded roses.

It was exactly the sort of thing to wear to a soiree at the Muller Villa, though perhaps the roses would have been too precious. Designed by Adolf Loos, the villa is considered a Modernist masterpiece, and its white rectangular form, windows edged in bright yellow, is still startling in Stresovice, a neighborhood of traditional houses with red-tiled roofs. Loos argued against any kind of pure decoration -- a lecture topic was ''Ornament and Crime'' -- and the Muller Villa was the culmination of his career. Even he declared it beautiful.

As I joined a few other visitors and put on oversize slippers to tour the house, now owned by the city of Prague and recently restored, I marveled at how much attention had been paid even to the entry hall. Its walls were clad in jade-colored glass tile, its floors a rich terra cotta, its ceiling a luxurious blue. Loos, I remembered, had said that ''through beauty we understand the highest perfection.'' A life here, I thought, would certainly be perfect.

In the open, double-story living room, I understood Loos's Raumplan, his name for a series of interconnected open spaces that flow into each other as breath flows through a body. He specified every detail of the house, insisting that a quarry be reopened to provide the exact type of striated green-gray travertine marble he wanted for the living room; ordering sheer curtains the same yellow as the exterior window frames hung in most rooms; and choosing exotic woods. In 1930, when Dr. Frantisek Muller, the owner of a successful construction firm, and his wife, Milada, moved in, they brought only clothing and a few personal items. Loos had provided everything else.

They lived there uninterrupted until the Communists came to power in 1948, when the house and its occupants became objects of scorn. Mr. Muller died a few years later; until she died, in 1968, Mrs. Muller lived in the villa, hoping the house would be classified as a museum, selling her possessions to collectors and institutions she thought might care for them. As the government took over more and more of her perfect house, she was relegated to less and less space. Eventually, Mrs. Muller slept on a daybed in her boudoir, its walls lined with citrus wood the color of wildflower honey, one end overlooking the marble-walled living room where she had once entertained. Years after she died, the Institute of Marxism-Leninism moved in.

From an upstairs window, I looked toward the silhouettes of the flat-roofed houses of Baba, and then across the way, to the serrated line of tall Communist-era housing blocks. I thought of trekking to Baba, or searching out the funky Cubist lamp post near Wenceslas Square.

Instead, I opted for the House of the Black Madonna, a Cubist building constructed as a department store before World War I and now, on a pedestrian walkway in the Old Town, the Museum of Czech Cubism. Its paintings intrigued me, but I lingered by the settee and the parlor sets, the dressing table and the vases, the sketches for homes and public buildings. Their maze of angles were sometimes bizarre, but endearing, and I was hungry for more.

So I took a tram along the river, toward the residential area of Vysehrad, and got off near the Kovarovic Villa, one of Prague's finest Cubist houses. The light was just right to make the walls and doors seem to collapse into one another, a Cubist painting come to life. I had just seen plans for such buildings, crazy cross-hatches of lines that would make most builders flee. But now, standing across from a house that seemed to be winking at me as the afternoon turned to evening, I realized that the people who had conceived them were hardly mad: they had simply lived in a time when almost anything seemed possible.