A Short Story by Ed Coonce 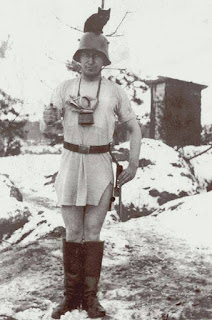 Horst Lingenstoltzger walked carefully, not hard, so as not to dislodge Zuckerpuppe, his kitty, from atop his helmet. She rode serenely, meowing occasionally, since it was close to her dinner time. Horst was a bit chilly, snow lay on the ground, and the new uniforms mandated by Obergruppenführer Colonel Fee lacked a certain...uh...length and the fabric was very light. The cold seeped into his bones, but he kept on walking heroically, spine straight and chin in, hoping that spring was just around the corner.

Following orders to the tee, he walked with the mini-ShakeWeight in his right hand and his laser pointer in his left. When his squadron marched in close-order drill, the effect was spectacular. Most of the kitties stayed atop their perch, but there were always a few that became agitated when the ShakeWeights began shaking and the lasers illuminated sharp, jerky points on the pavement. They invariably ran down the soldier's back and chased the laser lights, running through the troops' legs in random chaos. Seen from the private boxes in the reviewing stands, the action was beautifully controlled, yet terrifying. The drills were filmed and released in propaganda clips in order to intimidate and demoralize the enemy.

Horst hadn't signed up for this sort of duty. He'd had visions of himself in action, rushing the enemy's lines, tossing his grenades, parachuting from the Stuka as it dive bombed the Allied artillery batteries. He wasn't alone, though. His battalion, three thousand strong, shared the indignity of their situation without complaint. Well, once in a while, some private would throw his ShakeWeight at the Obergruppenführer and yell out "Are you fuckin' crazy?" The military police would come and remove him within minutes, and the company commander would dismiss the troops for a chocolate milk and streusel break. Fortified, the soldiers would then return to work.

Horst shivered. An icy late afternoon wind turned his forearms to goosebumps and his bare thighs stung with each gust. Zuckerpuppe stepped onto Horst's shoulder, where it was a little warmer. Time to move onto the next assignment.

Casual Friday was nearly over and he could get back into his greatcoat and go see Wibke, his girlfriend. She lived with her aunt in a small flat near the Brandenberg Gate, where she eked out a living as a window washer. Wibke could be found nearly any day on a scaffold high above Berlin, cleaning the windows through which the Obergruppenführers watched the city.

From her perch, she could see Horst as he high-stepped off the parade route and headed for his barracks. She wiped the last window dry and lowered the scaffold to the ground. Tonight was going to be very special. She and Horst and Zuckerpuppe were going to the screening of "Der Handshumaker," a short dramatic film-noire about Ilsa, a short girl who models gloves for the hoi polloi until, in a fit of pique, she runs out of the shop, down along the river, pulls her nine millimeter and shoots herself in the hand.

The cuckoo clock sounded as the doorbell chimed. Horst had arrived. This was going to be a great weekend.

Ed Coonce is an artist, actor, poet, and writer living in Encinitas, California. He studied fine art at Indiana University after serving two tours as a Marine in Vietnam, and transferred to the Coronado School of Fine Art, studying printmaking and painting under Monty Lewis, a Depression Era muralist who participated in the New Deal’s Public Works Art Project. Ed writes short satire and humor, and his current art frequently reflects the topical nature of his stories. Hie is a past board member of the Oceanside Cultural Arts Foundation, where he worked on annual events such as the Oceanside International Film Festival, The Art Festival, And Write On, Oceanside, an annual literary event. He hosts East Hell Writers and Phantom Poets, and is the creative director for Theatre Arts West. He is currently acting, singing, and dancing in a new musical comedy and writing the screenplay for two others.
at May 07, 2018