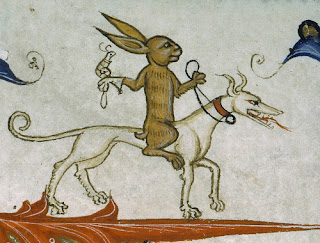 Rabbit Riding a Hound with a Snail of Prey

When I was young and less cautious--and I was very careless when I was young--I took up with a great many books. One of the books I took up with was The Sun Also Rises, a book of no small literary importance--not some idle bit of flotsam and jetsam but a book writ large in minds of readers, who remember it for its blunt sentences; a book written in black and white, like a chessboard.

There are legions of colorful books, and The Sun Also Rises isn't one of them. It reads like Plato's theory of forms: one word, one idea, one idea, one word. Between a word and an idea, or a name and its ideal form, there's always a blank space, a caesura, that sets what is named apart from all the other elements in the series, and produces an impression of isolation; a world in which the word fails to connect to other words, an overall lack of interaction among words. Between any number of elements--a man, a café, a passerby, a cigarette, a drink--there's always this empty space, which the reader naturally experiences as emptiness. There's always a party going on, and it's the emptiest party in the world. There's always a crowd assembling, and it's the most disassembled crowd ever to congregate.

Paradox is everywhere, even in the title.

Paradox creates an impression of endlessness, or the opposite: a sense of endless confinement. No one wants to be forever stuck in the puzzle; it would drive any sane person mad.

Even playful madness may feel sinister. The March Hare's first words to Alice are, "Your hair wants cutting." Alice rebukes him for being rude. She doesn't understand that the March Hare can only speak in riddles. Without understanding his "language," she is at the mercy of perceived attacks on her dignity.

For the strictly literal reader, the March Hare has taught Alice a valuable lesson: abandon pride all ye who dare enter here. The puzzle of self surreptitiously comes into play, and Alice finds no answers to her questions--only hurt feelings.

She must learn not to ask questions if she wants to avoid yet more riddles. In her situation, escape is the only solution

A reader recently pointed out that Gatsby's library strikes her as odd; there is an odd person there, a man who resembles an owl. Readers quickly find themselves sliding into nonsense when a character looks like a bird and speaks in riddles.

What are these riddles? The riddle of a library with so many books, the reader responds. Are there other riddles? The books' pages are stuck together, the reader answers. Anything else? The man. The one with the owl eyes.

The reader is asked whether the library, as described in the scene, isn't excessively grand. She can't quite make sense of the question because there is the man with the eyes of an owl, and he takes up all the space, as if the grandness of the space magnified what should have been diminished.
at March 30, 2018