There hangs a tale... 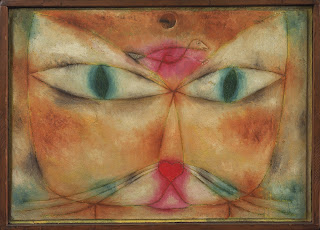 
I have a cat calendar that features a different kitty for every day of the year, alongside a feline-themed quote. It's only August, yet I've already had two offerings from Colette: "Time spent with cats is never wasted" (January 8) and "There are no ordinary cats" (June 16). Colette's felinophilia slinks into virtually every cat reference book in existence. Take this example from Desmond Morris's Catworld: A Feline Encyclopedia: "Colette - Cat owner: French novelist (1873-1954) with a lifelong passion for cats who wrote a number of books about her pets." Five of Colette's published works are listed, all of them about pets. Is that it? What about her three husbands, her many lovers, her colourful career in music hall theatre, or the hedonism of the Parisian demimonde that she inhabited? She had a lot of dogs, too, by the way. And, while we're at it, what about the literature.

Colette died 50 years ago this month [Aug. 2004] so now is a fitting point to rescue her from the trough of banality that is the Quotable Cat gift industry, which endlessly extracts sweet, but essentially asinine, words from the works of accomplished authors. I considered rustling up a seminal reappraisal of Colette's vast oeuvre through a close reading of her relationship with Fanchette, La Touteu, Minionne, Pinichette and Petiteu (these names are all options for your own cats, by the way, pretentious monikers for cats being perfectly acceptable). But instead I borrowed from the library Secrets Of The Flesh: A Life Of Colette, by Judith Thurman, and dug out a review from the London Review of Books that describes Colette (affectionately, I feel) as "the frizzle-headed Cat Woman of 20th-century French writing".

Photographs in the book show Colette in drag; Colette bare-breasted; Colette draped over a dead lion; and Colette many times over with cats and dogs. She was fond of French bulldogs such as Toby-Chien, "an adorable creature whose face looked like a frog's that had been sat upon". (Incidentally, you can't call your dog Toby-Chien - dogs must have solid, workaday names, none of your fancy stuff.)

Colette got into that one-name thing long before Madonna or Prince, or even Snoopy for that matter (it's Sidonie Gabrielle Claudine Colette, if you must know). She produced around 80 volumes of fiction, drama, memoirs and journalism. She grew up surrounded by animals - according to Thurman, Colette's mother "boasted of her ability to housebreak pets and children". Her fiction, letters and memoirs are peppered with astute observations about cats and dogs. She wrote Dialogues de Bêtes, a collection of quirky one-act plays with two characters: a cat, Kiki-La-Doucette, and a dog, Toby-Chien. The amours, desires and intrigues of Colette's animal characters are depicted with the same sensual lyricism as those of her wayward schoolgirls, adventurous women, acrobats, mimes, lovers and loners.

But the attention of any bibliophile cat owner is bound to be grabbed most by The Cat, a curious long-short story about an untenable triangular relationship between a man, a woman and, obviously, a cat. Thurman describes Colette's prose in this story as "particularly feline - both detached and voluptuous". Alain is in love with his cat, Saha ("My little puma! Beloved cat! Creature of the tree tops!"), and about to marry Camille, a modern woman who drives "a little too fast and a little too well". At one prenuptial point, we find Alain flung "on the cool expanse of the sheets" with Saha "purring full-throatedly" while her owner sighs: "Ah! Saha. Our nights ... " That's not a quote that has turned up on my calendar so far, but it might make you want to read the book.

Credit:  This article originally appeared in 2004 in The Guardian. It has been modified slightly for the sake of coherency.