Portrait of a Salem Witch


I was knocking about my in-laws house when I discovered a book: Witch’s Breed: The Pierce-Nichols Family of Salem by Susan Nichols Pulsifer. Being from Connecticut, as I am, you hear a lot about witches. They are part of the lore and history of the region. “Giles Corey of the Salem Farms,” a play by Henry Wadsworth Longfellow was published in the late 19th century. Corey was “pressed” to death for being in league with the Devil. According to legend, his ghost appeared whenever a disaster would strike the town of Salem. Arthur Miller’s masterpiece “The Crucible” (published in 1952) was a standard of New England High School productions. In 1956, Ann Petry’s young adult read Tituba of Salem Village came out. 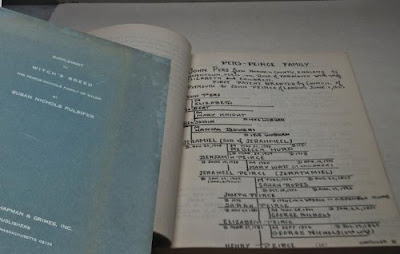 Still, all the years of my childhood and well into my adulthood, I had never met a descendant of the infamous trials—that is, until I turned the cover of Witch’s Breed to read the following inscription: “For my dear great-nephew … who is the direct descendant through his mother’s family (sic) Susanna Martin of Massachusetts…” It was then I realized that not only was I living among a witch’s descendants, but I had married into the family. My husband, obviously a lot younger, had penned his own dedication: “Thank you Aunt Susan for the book and the writing in the book too.”

The name Susanna Martin didn’t ring any bells. How had I, having grown up in New England, never heard of this woman? Who was she exactly? Where had she come from? What was her role in the Salem Witchcraft Trials? I asked my husband, who explained to me that her notoriety stemmed from the fact that she was an elderly widow and a Quaker. Puritans regularly persecuted back then. He told me about the time he’d gone to the Salem courthouse to read the transcripts of her trial. What was she like? I asked.  "Tough," he said.  Her toughness didn't save her. Susanna owned valuable land.  She was a widow.  Even her children were suing her (children sued their parents a lot those days). From the way he spoke of her, I could tell that he fond of her (or rather, proud).  I remarked that Susanna was the reason there were so many lawyers in the family.  Generations of them.

The woman who wrote Witches Breed (some title!), Susan Nichols Pulsifer was a poet and world traveler (like, well into her 90s). I wished I had met her. But I had her book. I turned the pages in search of Susanna. On page twenty-nine, Susanna appears in court, denying that she had ever had any hand in witchcraft. The magistrate asks if she knows what “ails thefe people.” Susanna’s responses are straightforward: “I do not know.” “No, I do not think they are [bewitched].” “I desire to lead my life according to the word of God.” “If I were such a person [referring to her accusers] I would tell the truth.”

Being from New England, like I said, I was familiar with the dreary evidence that allegedly proved allegiance to the dark lord. Cakes made of hair, blood, urine; dolls stuck with pins; fits (most likely seizures); unseemly behavior (a broad category); the ability to transport oneself; cause disease by a mere look; refusal to recite Scripture. In Susanna’s case, she was subjected to particular humiliation while incarcerated: she was stripped in an effort to find what was known as the Devil’s “teat.” They didn't find it but court transcripts report that her breasts were unusually full at certain times of day and flaccid at others—which led her jailers to believe that she had suckled the Devil (really?).

The allegations that led to her eventual hanging in 1692 were preceded by two accusations: the first, she had strangled to death an infant she had born out of wedlock, and her second child was also a bastard. Her husband, alive at the time, defended his wife and she was acquitted. But the stigma didn’t go away so easily. Other stories circulated: crops failing, animals doing her evil bidding, and her habit of verbally threatening people who displeased her (possibly true).

None of this impressed me. It was disheartening to think that so many women throughout history had to suffer the same fate. I was intrigued by one detail of the case that seemed out of the ordinary: Susanna was described as pretty and unusually clean. One of her neighbors testified that she had walked to her house during mud season and arrived without a smudge on her. I mentioned it to my husband. “Maybe she was a witch after all.” He looked at me like I was insane.

He was right. There was nothing to laugh about. Susanna had a difficult life, spoke out in her own defense, and died a gruesome death. She deserved my respect, at the very least.

Credits:  This article was originally published by Unusual Historicals in 2013.