For Sean, The Patron Saint of Heroin Addicts, Fire Victims and Blue-eyed Boys

Whenever I pray to you
I can see your death,
As if the bullets had cameras,
As if the eyes of the needles that pierced
Your veins were my eyes.

I can feel you inhale me,
Snorting me up with your last breath.
You lean back, allowing me to
Break you down, to poison you slowly.

Tucked away in a dark closet,
We slip off together, into those dreams
That I had as a girl (after you died).
I can count the moments you found me.

Whenever I am lost in nightmares
I pray to the boy I murdered,
And he comes to protect me.
He's forgiven everything from his old life.
He's forgotten everything
Except the ones he loved.

The Prophet from the City of Doves

Just who the hell are you anyway?
The wife of a man I love and hate
In equal measure, as I lay at his feet
The sacrifice of my childhood
A crumpled, bleeding carcass
Stoned by his followers, per instructions in Leviticus.

You were the interpreter, the Magdalene.
How did you become the whore?
How did your magician become a god?
Nobody understood your translation!

Now, every Christian woman
Thinks to herself “what if?” as she prays
For forgiveness from your imagined sins
Never daring to admit she knows she is not guilty.

Just what was all that about, anyway?
Your mission with your husband,
A man I love and hate in equal measure,
A man stripped of his humanity by the church he birthed.

But it’s easier than admitting…
I love and hate being a woman.
After all, I still have to live with myself.

I still have to live.
While he is long dead, forgotten by his followers.
May he return as a woman, or return not at all.

You come through my backyard while I am meditating
In your leopard print skirt, long dark hair flowing, crowned with grape leaves.
You look like a fool and I’m glad no one else can see you.
You pluck untold thoughts from my medulla oblongata
And string them up on the wind.
The melody makes me weep
For I hear the voice of the Divine within me.

I saw the thorns under those leaves in your crown.
I’m not fooled anymore.
You’re the same guy who everyone in church
Said will save us.
If they saw you in that outfit
Maybe they’d decide to save themselves.

You’re the same guy who sits in the Sundance Tree
And watches men dance their prayers into reality.
Bleeding, sweating and singing,
The movement makes them weep,
As they feel the Divine within them walking.

You’re even the same guy I used to be scared of,
The one who sits in darkness,
Forever asking what if--
Missing your father, his beloved,
The memories make him weep,
As he thinks of the touch of the Divine upon him. 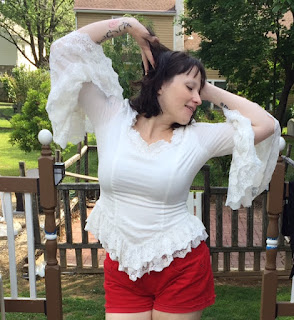 Catherine LaBella is a shaman by trade and poet by circumstance. The majority of her teenage years, she was persecuted for her visionary abilities by her family, who are also deeply religious. She could not control what she was experiencing, and this scared many people, including Catherine. It also made her depressed to know that half of the world she saw was obscured from the view of her loved ones. Eventually, Catherine's parents took her to a doctor, who erroneously diagnosed her with schizophrenia. At 13, Catherine was institutionalized in a psychiatric facility for almost 7 years, where she spent much of that time in solitary confinement. To keep herself from actually going insane, she would sing show tunes. Catherine writes to express the experiences of years of solitude and her understanding of spirituality. She has written two chapbooks, Back to the Garden: Prayers and Love Letters of Persephone, and Bluebeard's Last Wife, and been published in Danse Macabre. To read more of her work and purchase her books, visit: www.walkingbetweworlds.com