Ode to Feed Me

Not quite six, and still no sun,
but Coconut's up, sitting on the dresser,
her face oscillating from us
to the metallic Venetian blinds
partly letting inside out,
outside in, except it's Saturday,
and we want to sleep late.
No matter, Coconut's in charge,
and she proves it by plucking
free-style notes from the echoing blinds,
while meowling like Ray Charles.

I've rarely been able to speak plainly,
not without images, not without
making a statement iridesce as it rises,
almost as if to paint a canvas in air;
not without wishing to leave more than echoes,
the backwash of talk or of song.
Always, words have had to enselfie
the gist of a moment or thought/s,
of feeling/s or even the unwieldy reminiscence.

Now, nearing midlife, with enough gray and white,
enough creases, this overplus of disparate
experience just behind my brows,
I begin to distrust the effort of such talk;
desiring plainness, needing nothing of a
"Listen, looky here!" Thinness, transparency:
some pure words that stop, some clear words that fade.

Think of it as earned, a reward
extracted, through patience,
from tedium, from the thorn-
encrusted cacti leaves of despair
or isolation, or from the bitter
tap roots of cowardly disregard,
all these morphed and transmuted
into a moist luster almost like love,
like anything wishing to be true
or else wanting to break, blossom,
happen, though not outlast.

For months: tough, sinewy stalks,
with here a leaf,

a fiber-cluster tendril
muscling up out of soil
under down-stroke of sun
and myriad weather.

After all these months
and a few weeks more: orange/red buds,

with here an aphid,
there a lady bug,
now a black, then green/yellow
inching along caterpillar

to turn topsy-turvy
into a dark silken sling,
therein to slough off days
of previous feasting.

Then off: orange/white/black wings,
a few weeks' transforming,

turning now to poem,
and whatever else it can become,

Because his faithful heart
will be broken eventually,
take him swiftly in all of his trust,
his chest flushed, glistening red
under sweat become magnetic,
take him swiftly while he's
hot and mad for you, with
a burnished fragrance at his pits
as from flames at full-hiss.
Stand mutually with him here
in your arms, near the ocean,
become a compass glass
for this ever-restless world,
that draws close, now;
away, now; inscribing lusts
or lessons without apology;
with a near-fresh hello, always,
plus a rinse-wrung goodbye.

"Lookin Out the Gym Window While Doin Weighted Squats, I See"

the silver, white, gold, orange, black,
water-slick translucence of polyethylene swans,
unicorns, clownfish, and pool-ready octopi,
carrying wildly gesturing Lindos
from this side to that side of the pool,
palm-fringed, sun-shot, half in shadow. 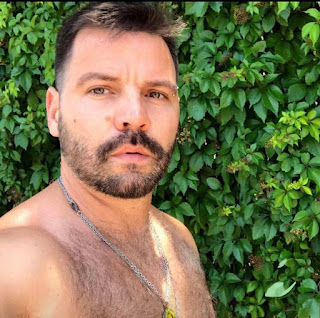 
A high school teacher in a Miami, Florida and a former adjunct professor at St. Thomas University and Miami Dade College, JRM holds an MFA in Creative Writing from the Jack Kerouac School of Disembodied Poetics at Naropa University. He is a poet, diarist, literary critic, translator, plus enthusiastic advocate for personal awakening and ecological renewal. His own poems, translations, and book reviews have appeared in The Cimarron Review, Ragazine, Battersea Review, Danse Macabre, TheThePoetry, Bombay Gin, Big Bridge, El Coloquio de los Perros, Osiris Poetry and Metropolis. His first book of poetry, Everything/Nothing, was published independently in 2014.
at August 02, 2017