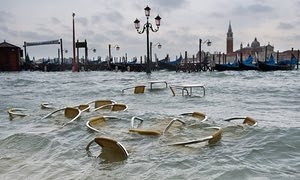 A History of Flooding in the Sinking of Venice

I woke up today terrified the electro-magnetic field had flipped. The air burned. My sheets were scorching. I’m better now but only because I’ve lathered myself in oils pressed from three-hundred-year-old cacti. Cactus oil costs a fortune. I get mine on the black market.


How I despise this season. It’s as sloppy wet underfoot as Venice when she finally sank into the ocean, despite all attempts to hoist her up with propulsion and anti-gravity devices. She sank regardless, and with her the most beautiful man I have known.

Yes, Marcel, yes. He is gone. I should be used to it by now. The only man I ever loved, leaving me behind in this melt, slosh, that by midday starts to let off steam. It’s unbearable. The ozone layer stretched thin and the sun behaving erratically. I was under the impression that the sun destroyed and remade the ozone layer every day, at least that’s what scientists said a century ago when we were still calling ourselves a country. Of course, that was before the last civil war. Or was it the one before? It’s so vaporous around here. Rancid smelling. Who can remember anything in this sauna?

But why complain while the world is sinking, burning, tearing itself apart? What good does it do? I think of him instead. My mind flees to him instead. My body is a map of all the places he touched me. I trace the travels of his fingers, his tongue. He saved me from the heat, this interminable fire. He never ran hot, always cold. It was wonderful to lie with my cheek on his icy chest, listening to his slow, beating heart.

When I was a child, I would crawl into the caves near our house to get away from the heat. It was damp and mossy under the rocks. The air chill. A dark, cold space. That was my love. He was my dark, cold retreat from this inferno we call earth.

Marcel, I can’t go on like this. I am exhausted. I need to close my eyes, sleep. But, I am in anguish. I think of the ocean carrying him far from me. I imagine the moment the water took him, the wonderful coldness of his being sucked from his body as the sweltering waves pulled him under. Did he die of drowning or boiling? I must sound as if I am raving asking such a senseless question. It’s just that I am so feverishly warm without him.

Have I made you sad? Don’t cry, Marcel. Don’t cry. It’s difficult, so hard. You loved him too. I know. And he loved you.

Another Letter originally appeared in Oblong
at June 21, 2017